Argo is the mostly true story of the rescue of six American hostages (the exfiltration, in spook parlance) from Iran during the Iran hostage crisis. Argo is the mostly true story of the rescue of six American hostages (the exfiltration, in spook parlance) from Iran during the Iran hostage crisis. The movie is based on an article from 2007 that ran in Wired magazine, which is itself based on actual real life events that took place over the course of 444 days in 1979/80.

Turns out, in the late seventies and early eighties we didn’t have the best diplomatic relationship with Iran.1 Way back in 1953 the CIA started a coup in Iran that overthrew the democratically elected Mohammed Mossadeq and installed Shah Mohammad Reza Pahlavi. The Shah was not a super popular guy amongst Iranians, and in 1979 the Iranian Revolution ousted him and installed the Ayatollah Khomeini. The Shah left the country and sought entrance into the United States, which he was granted, for cancer treatment. The leaders of the Revolution wanted the Shah extradited to Iran so he could be executed, and when the US government refused, Iranian students stormed the US embassy in Tehran taking 52 hostages. This is where Argo picks up. 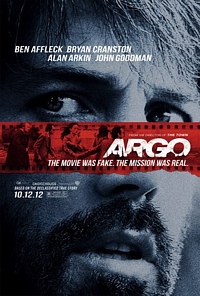 Unbeknownst to the mob of angry Iranians, six Americans manage to escape into Tehran and end up in the home of the Canadian Ambassador–where they’re confined for the foreseeable future. Luckily, the home of the Ambassador is stocked with wine, scotch, exotic foods, and 70s music. Unluckily, leaving the house means death by firing squad. The revolutionaries, unaware that the six have already escaped the embassy, have vowed to execute anyone that tries to escape (or, awkwardly, already has). So the escapees drink, throw dinner parties (for themselves), and wait nervously for the tension in Iran to die down–but it never does.

Since the predicament and location of the escapees is Top Secret, the US Government begins working on ideas for a covert exfiltration mission. Enter Tony Mendez (Ben Affleck), a CIA agent with a specialty in removing people from sticky situations. After the team kicks around some really terrible extrication ideas–like giving the escapees bicycles (it’s 300 miles to the nearest border), disguising them as english teachers (school’s been closed for months), or having them pose as agricultural inspectors (it’s the dead of winter)–Mendez suggests that a Canadian movie crew on a location scout might make for a passable cover story. It’s one of those typical action-adventure movie situations where someone says “that’s so crazy…it just. might. work.” But guys, this happened IN REAL LIFE!?

Because the Iranians are crafty, the movie cover story needs plenty of corroborating details. So Mendez hooks up with John Chambers2 (John Goodman), the legendary makeup artist, and creates a fake production company, with a fake office and fake business cards, tasked with creating a fake movie. That movie is the science fiction epic Argo.3 They enlist producer Lester Siegel (Alan Arkin) and start placing ads in Hollywood media and throwing parties to drum up interest in the (fake) film. Their cover needs to be bulletproof to fool the revolutionaries who, as you can imagine, are a bit on edge and not too friendly towards North Americans (even Canadians!). With the cover story created, Mendez heads to Iran to try to sneak the Americans out, undercover but in plain sight.

Argo (the real one, not the fake sci-fi one) is tense from the get-go–almost too tense. Anything that could possibly increase the stress levels of the on-screen characters, happens. And after two hours of Affleck’s edge-of-the-seat antics evading Iranians, it starts to feel forced. Then, after all of the building and building, the film’s climax seems too quick and rushed. There’s lots of (spoiler alert, but, really, history’s the true spoiler) scenes of people jumping around, hands thrown in the air, shouting “We did it!” This film sports some serious acting heavyweights, and I’ve seen them all do better than the present-day version of an 80s freeze-frame high five.

I want to blame someone or something for the crappy ending, and it’s either the director (which is, in fact, Ben Affleck himself) or the script. I’m going with the script, which is by Chris Terrio who hasn’t really done any feature film screenwriting before Argo. Plus, you have to give credit to Affleck for some really neat usage of archival footage in the movie. You see actual news footage of the Iranian revolutionaries, newscasters, and American reactions cut in to support the story Affleck is trying to tell. Even the opening credits are grainy and use an old Warner Bros. logo (which is sweet) from the 70s. It’s clever and successful stuff (unlike the campy ending).

You were alive in 1979 and remember the Iran hostage crisis. Or you weren’t alive and feel like you probably should know about an event that played a critical role in our current relationship with Iran. Or you love suspense!