Anna Karenina: The world’s a stage

From the makers of Atonement and Pride and Prejudice, it’s Anna Karenina! The rousing tale of love, betrayal, hypocrisy, and trains. Joe Wright–director of beautiful films, appreciator of Keira Knightley, lover of sunsets–is back again with Anna Karenina. The latest adaptation of the legendary Tolstoy novel features Knightley as Anna, a 19th century Russian socialite, who has the misfortune to fall in love with Count Vronsky, a man who is not her husband. Unfortunately, her husband is kind of a super nice guy who doesn’t really deserve what he’s getting. But is that a good enough reason for true love to prevail? Fancy Russians sure don’t think so.

The novel’s resolution is a famous one, but I won’t spoil it here for anyone who hasn’t heard. 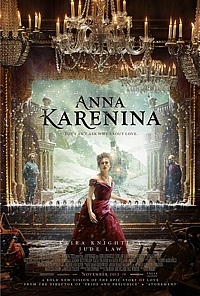 If you’ve seen Atonement or Pride and Prejudice, you’re no stranger to Joe Wright’s liberal use of sunbeams or vivid costumes. He’s a genius at creating rich textures and memorable imagery that give us plenty to look at while the carefully paced action unfolds. Anna Karenina manages all of the above while attempting an even more ambitious style; the characters weave back and forth between a soundstage and a theatre (and not just the stage–Wright uses every available space in the richly adorned playhouse).

And rightly so. Attending operas and plays was a chief social hobby for the idle rich in those days, who made their money from the land that peasants cultivated on their behalf. More interesting than the drama taking place on the stage was the constant shifting plots, sabotages, and subterfuges of who was accompanying whom, who was sitting in what box, and, of course, what everyone was wearing. Wright never lets us forget that, by virtue of being a member of the upper class as well as a woman, Anna’s misfortune is a source of thrilling entertainment for her peers. No one really cares who anyone’s diving under fur blankets with, but, as one prim character explains to Vronsky, “She broke the rules.”

Knightley is arresting as usual with expressive eyes, and her more mature bearing amps up her magnetism. Five years ago, she would have seemed too young to play Anna, but suddenly little wispy Keira is all grown up. She’s convincing as a desperate lover and a devoted mother, just as Jude Law, who plays her husband, Karenin, is uncharacteristically grim and righteous. I wasn’t quite as taken with Aaron Taylor-Johnson’s Vronsky. He overacts during the first act, marching around stiffly with a raised eyebrow in an almost satirical representation of a womanizing young swain, but he earns his stripes as his emotions become more complex later on.

Searching for the antidote to society’s endless drama, Domhnall Gleeson (or “one of the Weasleys,” as I call him) is Levin, a landowner struggling with various realizations about love, humanity, and hard work. He’s a foil for St. Petersburg’s hypocrisy, finding purity and satisfaction in connecting with the salt of Russia’s earth. He’s also constantly bathed in Wright’s beloved yellow sunbeams, while Anna gets farther and farther away from them.

Joe Wright makes an ambitious gamble with Anna Karenina’s constant stage/life shifts. It could be confusing, but it’s not. It could be annoying, but you get used to it surprisingly quickly. It could be heavy-handed, but it moves quickly enough so that you’re kept on your toes. Instead, it ends up feeling appropriate, innovative, and artistic.

You swoon with pleasure at the very thought of Atonement or Wright’s P&P, and you unabashedly defend Keira Knightley as a talented actress who can look as unusual as she wants to, dammit.

It’s just not your thing. One viewing of the trailer will give you all the data you need to make that decision. You thought Atonement was boring and you wouldn’t be caught dead watching a sissy Jane Austen movie. You’re far too busy polishing your icy, granite heart anyway.