This French film is nominated for Best Picture. Ummm…that’s about the only cheerful thing about it. The only thing more difficult than watching the Best Picture-nominated Amour is writing an entertaining review of it. Director Michael Haneke, who brought us such other light-hearted romps as Funny Games and The Piano Teacher, fine-tunes his supernatural ability to translate suffering, sorrow, and grief to the silver screen with the story of two elderly lovebirds who are facing what all of us eventually must.

Here’s the rub! I actually really liked both Funny Games (two boys torture a family physically and psychologically for no reason) and The Piano Teacher (Frenchwoman with disturbing repressed sexual proclivities is bossed around by her mother). They weren’t exactly pleasant to watch, but they made me feel things–hopelessness, repulsion, anxiety. It’s an odd set of emotions to explore, but…you know. Movies. They’ve gotta cover all the bases. 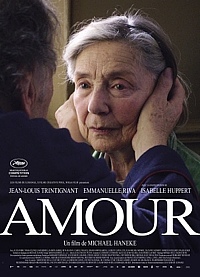 In Haneke’s latest, Georges (Jean-Louis Trintignant) and Anne (Emmanuelle Riva) come home from a pleasant night out in Paris…a night that WOULD BE THEIR LAST (night out) (dun) (dun) (DUNN). Well, they do briefly leave the apartment once more, after Anne suffers a mild stroke and goes under the knife. However, we as the audience never leave the confines of their gorgeous abode.

Bang-up job, Haneke! Through the course of this 2.5-hour film, we literally watch Anne read a book, George shuffle back and forth between giant rooms, grocery deliveries come and go–all while waiting for the hammer to fall. The very first scene is a flash-forward that Anne will die in her bed, so there’s no anxious tension of “Will she or won’t she??” Nope! Just a sluggish decline in her health, his mood, and their daughter’s patience with it all. Riva does an incredible job portraying a stubborn invalid who tries her best to die quickly and with grace, but in the end, she’s trapped in her fate. Just like Georges is trapped in his promise. Just like we’re trapped in the theater.

Amour’s take on life is the opposite of the brutal, random violence of Funny Games. As you age, your inner self is stuck in a deteriorating body, we all know that. But when the “you with all those memories and opinions you hold dear” becomes more like “flickering synapses setting off random reflexes in a brain that is really only functioning on a basic level”, are you still trapped? Or have you already left the building?

Or maybe it doesn’t even matter how many neurons are still skipping about in your noggin. Maybe it just matters how the person who is closest to you is handling it. I mean, let’s be honest, you’re on a downward slope, here, but how is your life partner going to handle such a huge change. What’s left for them?

As you can probably imagine, it was hard to hear the dialogue over the rousing cheers and jubilant popcorn-throwing of the audience.

But seriously, folks. It’s heavy, but it’s not quite a tearjerker. Amour is a reminder that this is how life is. We do what we can to minimize risk, but none of us can say for sure that we won’t be sliding bit by bit into a vegetative state as our family sits by helplessly.

Woooooooo, Haneke. Thanks for that.

This beautifully made film succeeds in what it was trying to do: show us exactly how boring and depressing it is to be old and infirm.