Virginia officials recently celebrated the 225th anniversary of the arrival of the plaster-of-Paris model that was the basis for building the state Capitol. Thomas Jefferson commissioned Frenchman Jean-Pierre Fouquet to make the model and ship it to the newly independent United States of America. It arrived on Feb. 28, 1787, and is still on display for the public. In the Virginia Capitol’s Jefferson Room, named for housing the larger-than-life portrait of the man himself, sits a relatively unassuming scale model of the building that houses the oldest legislative body in the Western Hemisphere.

In 1787, when the model arrived on the shores of the newly independent United States of America, Thomas Jefferson said it was “absolutely necessary” in order for workers to properly build the first Roman-temple-style structure in the New World.

Jefferson wanted to send a message to the rest of the world when he designed the state Capitol, inspired by the Maison Carrée, a first-century Classical Roman temple in Nîmes, France. In a letter to his friend James Madison, Jefferson said he wanted the building to be “an object as proof of national good taste” – something other nations would see and respect. The only problem was that the closest buildings to Jefferson’s design were across the Atlantic.

So the model served as the basis for building the statehouse. This year marked the 225th anniversary of the model’s arrival; it has been around longer than the Capitol itself. (The Capitol’s cornerstone was laid in 1785. In 1788, the building was completed and the General Assembly of Virginia began meeting there.)

Jefferson originally wanted to bring European craftsmen to Richmond to construct the Capitol. A more cost-effective option was to create a scale model of the Capitol-to-be in the style of famous Roman architecture.

In May 1786, Jefferson paid model-maker Jean-Pierre Fouquet 372 livres, the French currency at the time, to construct a plaster-of-Paris model. Another 84 livres were spent to pack the model appropriately for shipping across the ocean. In today’s dollars, the total bill would be the equivalent of more than $23,000.

According to Mark Greenough, the supervisor of tours and a historian at the Capitol, Jefferson felt the model was necessary because “there simply were no other buildings of its kind this side of the Atlantic.” Why would Virginia officials hold on to the model after completing construction of the Capitol? “When you spend that much money on something, you kept it,” Greenough said.

The model was built at a 1:60 scale – one inch representing five feet of actual building. It arrived in Richmond on Feb. 28, 1787. State officials celebrated the anniversary this year.

“It is absolutely remarkable, given its perilous maiden voyage, the ravages of time, and the sometimes tumultuous history that it has witnessed, that this fragile yet powerful manifestation of Jefferson’s vision made real by Jean-Pierre Fouquet is still wholly intact and on display for the citizens of the commonwealth and all lovers of history and architecture,” said G. Paul Nardo, clerk of the Virginia House of Delegates. His Senate counterpart, Susan Schaar, agreed.

“It is important to mark this special anniversary as a testament to the ongoing stewardship of our Virginia heritage, and as a reminder, to us and to our successors, of the importance of safeguarding and nurturing these treasures of our past that continue to inspire us today so that they may continue to speak to the generations to come,” Schaar said. She noted that the model is one of several pieces of Virginia history and art housed in the Capitol.

The Statehouse as Art Museum

Walking through the building, Schaar pointed out paintings and sculptures, from the portraits of Virginia governors to the busts of U.S. presidents born in the state. When Schaar arrived at a statue protected by a waist-high fence in the center of the Capitol, she made a point to stop.

“This is the jewel…It’s priceless,” Schaar said as she looked up at the statue of the first president, George Washington. “The head has a mold of his face, so you’re looking at what he looked like…even down to his missing button on his jacket.” The statue is one of two pieces of art in the Capitol that have not moved since their installation. The other is an enormous painting – “The Storming of a British Redoubt” – in the Old Senate Chamber. 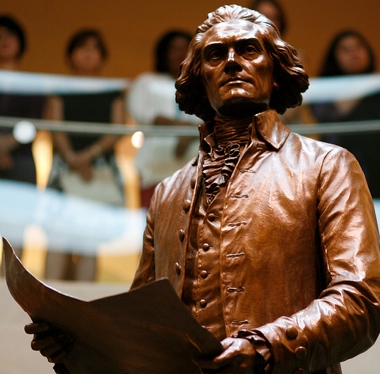 Ivan Schwartz of StudioEIS created the bronze statue, which stands about 8 feet tall and weighs 800 pounds. The statue depicts Jefferson in his early 40s, holding architectural plans for the Capitol. The Jefferson statue will be on permanent display in the Capitol Extension, greeting the more than 100,000 people will visit the statehouse each year.

Schaar, who has worked at the Capitol for 38 years, was part of a committee that oversaw the restoration of the statehouse from 2005 to 2007. That project brought the Capitol up to modern standards after years of being “held together by layers of paint, electrical wire and duct tape.” As it stands now, the post-renovation Capitol is a major tourist attraction, where visitors can enjoy lessons in history, art and civics, all while on a budget.

“Come here, because it is the public heart of the Commonwealth,” Greenough said. “It’s a national historic landmark. It has evolved into a really nice fine-arts museum. It can serve as an inspirational civics classroom to educate and inspire … and it has free admission.”