A blue man talks about performing in Blue Man Group

The world-famous Blue Man Group will come to Richmond later this month. We spoke with one of the performers who talked about the upcoming performance, the message behind the theatrics, and just how long it takes to put on that blue makeup. Most people go out of their way to avoid being blue. If you’re Bhurin Sead, however, it’s what you do for a living. As a member of the Blue Man Group, Bhurin is always blue while at work. Literally. “It’s a really exciting experience,” said Bhurin (pronounced: “pure-in”) of his extraordinary job while on a national tour with the famed group.

Bhurin earned a degree in human biology from the University of Texas at Austin. “Music was a big part in my life,” he said. While playing in several bands, Bhurin also wrote and performed “skits and vignettes” while in college. Although something he enjoyed devoting time to, the theatrical arts were “never really the focus” of his education.

After graduating, and while working in an Austin laboratory, he heard about an open call by Blue Man Group in Texas’s capital city. He recalled seeing the famous troupe perform earlier in his life, thinking “what a cool show” at that time. He thought it would be great to audition, so he did. And they were interested.

The group gave him a call-back, asking him to New York City for further auditions. He didn’t get the part, but while there he was encouraged to take acting lessons to develop what several in the group saw as being innate talents. Bhurin decided to “go for it,” and packed his bags for the Big Apple.

After moving to New York City, in 2008 the Blue Man Group contacted him and asked that he audition once again. After auditioning, a process that typically lasts two days, they made an offer to train him to be an official Blue Man Group performer.

Training lasts eight weeks. Working out of the group’s Manhattan facility, approximately four to five weeks are spent instructing new members in a studio. The remaining weeks puts trainees into actual shows, where directors and existing Blue Man Group members “constantly give you feedback.” The performances also serve as a sort of right of passage as trainees are finally “bald and blue,” performer parlance for adorning the famous blue makeup.

Approximately seventy full-time performers world-wide, along with other part-time contributors, each take approximately thirty minutes to adorn the recognizable makeup before every show. The first stage, and what Bhurin said is the most time-consuming, is to apply a latex “bald” cap, gluing it to the hairline and behind the ears to make the balding seamless and natural-looking. The next task is applying a “specially made” blue grease paint. Applying it is “actually really quick,” said Bhurin. However, he did say that character Tobias Fünke’s obsession with the famous group in the show Arrested Development was not far off. In the show, smatters of blue paint are often found on walls and appliances in the character’s home. Bhurin said that performers often inadvertently leave blue grease paint “all over the dressing room” in a similar manner. 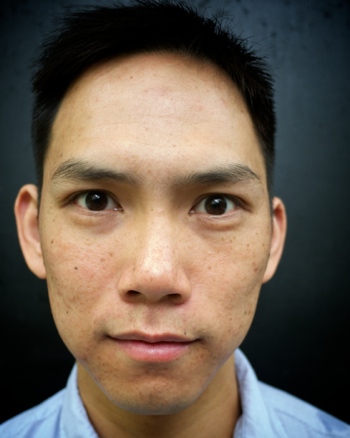 Although in his third year with the group, Bhuring is touring the country for the first time with them. The upcoming performance at the Landmark Theatre will mark his first time visiting Richmond. He started touring in July 2011 and has “been on the road since” with only about six weeks off. This tour is also a first for Blue Man Group, as it will feature a more “theatrical” show that Bhurin said is “totally different” from the largely music-based performances many have come to expect from the group.

The Blue Man group has a team of producers that constantly try to figure out ways to add new components to performances. Bhurin said that this tour features, among other things, a “gi-Pad” (a very large iPad) that is intended to be used, not only for stunning visuals, but to also as a comment on how some have allowed technology to wedge itself in between interpersonal communication. Ultimately, the Blue Man Group, in its own way, encourages communication. Not only with their audience, who are routinely invited on the stage during performances but for audience members to leave performances with an increased awareness of their surroundings. To “live in the moment,” is the most important takeaway that the Blue Man Group imparts. Despite the sights and sounds that the group’s show produces, ultimately Bhurin thinks there is a message in what the Blue Man Group does.

Bhurin said that the blue paint allows performers to “peel away social masks that we are forced to put up when we get older.” He offered that the “child-like innocence” of Blue Man performers is a “natural energy inside of everyone.” Not only has the Blue Man Group entertained over 17 million people worldwide, entertainment personalities such as Penn Jellette laude the Blue Man Group’s ways. It’s easy to understand why Bhurin and his fellow gang of blue men still draw a crowd.

The Blue Man Group will perform at the Landmark Theater from April 27th – 29th. Members of the group will be available to meet and sign autographs immediately after each performance.