With donations arriving from places like Bon Air and Barcelona. The VMFA announced that its first foray into crowdfunding (see below) raised $61,225 in its 26-day campaign, surpassing the museum’s $50,000 goal.

The funds will go toward the VMFA’s general fund for exhibitions.

Marsha likes small buildings, Greg and Peter aren’t really fond of columns, and Cindy didn’t like anything and had to be switched off. Luckily Jan and Bobby stepped in to help with the slack.

The 3D printers building two miniature Forbidden Cities inside the Virginia Museum of Fine Arts (VMFA) are affectionately named after The Brady Bunch children;1 fitting as the machines often feel like children to Courtney Freeman.

“You’re riding the wave of it,” said Freeman, the VMFA’s assistant production coordinator, by phone last week. “When something doesn’t print out, it’s very frustrating. And when it does, you feel so successful.”

Freeman and other VMFA staff, as well as two high school student volunteers, have wrestled with the new technology and capriciousness of 3D printing for the past several months to print 700 buildings needed to erect a scaled model of China’s Forbidden City in time for the VMFA’s Forbidden City: Imperial Treasures from the Palace Museum, Beijing exhibit opening October 18th. 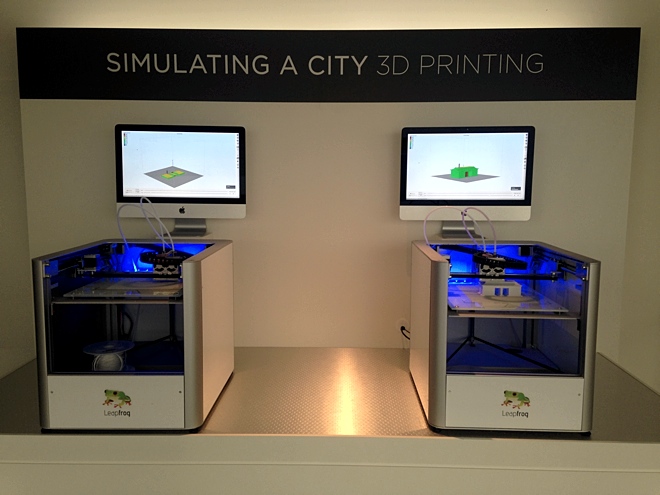 “We’ve been doing this since June, and it’s been a huge learning curve,” Freeman said. “We’re just hoping it sparks some interest and some curiosity with our visitors.”

The VMFA partnered with Amsterdam company Leapfrog, which back in January unveiled a 1:300 scale replica of the Forbidden City. The Amsterdam company donated six 3D printers and provided 29 files that make up the 700 structures in one scaled replica. “They’re all varying sizes. So you have anywhere from a 0.5” little house to [the largest one] which is a good 6” x 10”,” Freeman said.

The VMFA will eventually house two scaled models (1400 total structures). The museum will display one completed replica throughout the exhibit’s duration. Additionally, two 3D printers located in the museum’s atrium will continually build a second replica throughout the exhibit’s duration, giving visitors both completed and in-progress models to see.

“We absolutely think that the innovative design combined with the complexity, and just beauty, of the Forbidden City show is a way to incorporate new technology and bringing a new view and a new life to the exhibit,” Freeman said. “Just pushing the envelope on design as well as the accessibility the exhibit and getting people interested.”

But 3D printing isn’t the only way the VMFA is making itself more accessible. The museum recently forayed into another technological first: crowdfunding.

“It’s still somewhat new in the museum world,” said Claudia Keenan, executive director at the VMFA, about crowdfunding. She said the museum had “been toying with it” for a while, but waited until “we felt really secure in doing any kind of online initiative in a bigger way than we had in the past.”

Keenan said there were two goals for the museum’s first crowdfunding campaign: “One of them was to generate excitement in advance of the Forbidden City opening, and the second was to start putting ourselves into that social media philanthropic space we had not been heretofore.”

Instead of using Kickstarter or Indiegogo, the VMFA is using Razoo. “One of the biggest risks of doing a crowdfunding campaign is the possibility of public failure, which is why some institutions shy away,” she said. “Razoo is geared toward non-profits [and] allows you to keep all funds regardless of whether you reach your stated goal.”

Donation levels correspond with different Forbidden City structures. The Meridian Gate is at the base $10 level, Tea Houses at $25, etc. With a donation “you get information and a story about the significance of each one of those areas within the Imperial Palace in Beijing,” Keenan said. “So you’re learning about the upcoming exhibition and elements of it as you help us build the Forbidden City.”

But the museum has already exceeded that goal with the pledge by Frank Qiu and Ting Xu of local Evergreen Enterprises to double every gift, dollar-for-dollar, up to $25,000. That could net the museum over $50,000 by the time the Razoo campaign ends on October 17th.

Not only had the museum surpassed its fundraising goal, Keenan said 23 percent of donors are first-time givers to the museum. “We’ve done more online donations during this campaign than we have in the past three years of non-member philanthropy,” she said.

While the VMFA’s first crowdfunding campaign ties into its upcoming exhibit, funds will ultimately boost the museum’s leverage for additional exhibits.

“All of the donations will go to our overall exhibition fund at the museum, which allows us to bring banner, world-class exhibitions to Richmond and to the Commonwealth all the time,” Keenan said. That means more exhibits like Hollywood Costumes, Chihuly, and Forbidden City. “These kind of efforts allows us to continue to bring the world to Richmond.”