Winning a fight for his life

After a lifelong battle with Cystic Fibrosis and a lung transplant in 2006, Chris Nalley will be running Saturday’s half marathon with Dr. Mark Robbins, a physician who helped cared for him throughout his ordeal.

Double lung transplant recipient Chris Nalley (pictured above) will be running the McDonald’s half marathon on November 13th beside his physician, Dr. Mark Robbins. Runners have the choice of the McDonald’s Half Marathon, Suntrust Richmond Marathon and the HCA 8K. The proceeds from all three events support the organ donation charity Donate Life. In 2006, Nalley ran the 8k  just five months after receiving his transplant.

“The first breath I took when they took the tube out of my throat after the surgery was the deepest breath I had ever taken,” he says about trying out his new lungs. He compares the coolness of that breath to breathing with a mint in your mouth on a winter day.

Due to Cystic Fibrosis, 31-year-old Nalley has experienced labored breathing for most of his adult life, along with chronic and life threatening lung infections. The Cystic Fibrosis Foundation defines the condition as a life threatening genetic disease that causes mucus to build in the lungs and digestive system. The mucus traps bacteria in airways causing lung infections. It also blocks digestive enzymes from reaching the intestine.

Nalley was diagnosed at age nine after doctors misdiagnosed the condition earlier in his childhood. Following high school, his body began to resist the antibiotics needed to fight the constant lung infections. In the few years before his surgery, he suffered from severe bouts of pneumonia. Nalley was fighting for his life. His worst round was in January 2005 when he developed a grapefruit-sized pneumonia in both of his lungs — doctors could not treat without putting him into a five-month-long drug-induced coma. During the coma, a priest was summoned twice to give Nalley last rites because doctors thought he was not going to make it through the night.

After the ordeal, Nalley was put on the waiting list for a double lung transplant. According to his physician Dr. Robbins, a transplant is generally setup when the patient has less than two years to live. But recovery was not as simple as waiting for his donor lungs. After leaving the hospital he was emaciated at 126 pounds.

“My mom would just load me down with food” Nalley says about the effort to gain the 15 to 20 pounds needed to undergo surgery. Confined to an oxygen tank for 24 hours a day, he had no choice but to submit to a sedentary lifestyle and a loss of independence he calls demoralizing.

“I would literally get winded just to walk down the hallway to get to the bathroom,” he says.

His friends were supportive and inclusive, taking Nalley to concerts, bars, and clubs. They even helped him with his tanks on a beach outing, but Nalley felt embarrassed because of his condition. Although he tried to joke around and join in as much as possible, he says, “I was always the guy with the oxygen tank hooked up to him sitting in the corner.”

“The last two years I have been alive have been pure hell,” Nalley told his family before surgery. Although they were afraid of the outcome of such a complicated procedure, he was not.

“I am not super religious… but I had not been brought that far to die on the table,” he says about his desire to “get it over with” and experience normalcy.

But normalcy was a goal he surpassed years ago. At first he pushed too hard. After his surgery, he was prescribed a walking regimen of two miles a day to remove in fluid his chest cavity. He was sent to the ER for “irritating the trauma from the surgery” by doing more than recommended.

“I felt like…the faster I went the faster this [recovery] process was going to be,” Nalley explains.

Nalley continued to strive, and is now self sufficient and active. He was a gold medalist at the U.S. Transplant Games and is working to start a Virginia Transplant games. He and his friends also started a flag football league in Richmond.  “My initial problem was getting my body to handle the stress of running,” he says about his transformation. 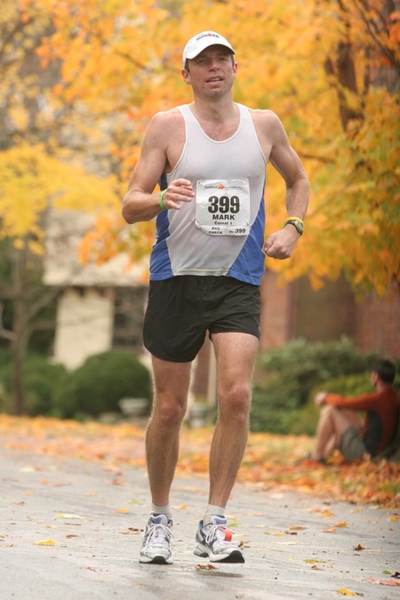 “The main person I am glad is going to be there is Dr. Robbins,” Nalley says when asked about the pair running the half marathon together. Their relationship has grown over the many years Nalley has been Robbins’s patient.

“He has been bugging me to run a marathon with him forever,” Nalley says about the encouragement he has received from Robbins over the years.

When he’s not at work serving as the medical director of the adult branch of UVA’s Cystic Fibrosis Center, Dr. Robbins (pictured to the right) can be found training for triathlons and running races. Robbins cared for Nalley before and after the transplant* and uses him as an example to his patients of how they can lead active healthy lives after transplantation. Dr. Robbins is still astounded by Nalley’s transformation.

“I have been doing this for 18 years, and every time I see that you can take someone’s old lungs out and put in these donor lungs and they work and people do well, it’s miraculous,” says Robbins.

Both men are ardent proponents of organ transplantation and spread awareness through lectures to the public and schools.

Nalley takes 36 pills on average a day in a regimen consisting of immunosuppressants to prevent his body from rejecting his lungs and supplements to replace the nutrients the medication drains from his body. But he calls it “a fair trade off” from facing death or a life of inactivity. After “a brush of rejection and a bout of pneumonia” in April, he is a healthy 184 pounds, can run 13.1 miles, and continues to revel in the feel of deep, cool and continuous breaths.

*Note: We previously reported that Dr. Robbins was the doctor who performed the transplant on Chris Nalley. As you can see from the corrected text above, Dr. Robbins is a specialist in pulmonary medicine who cared for Mr. Nalley before and after his surgery, but he is not the doctor who performed the transplant. We’re so sorry for the error. Still an inspiring story though.