A new way to use smart phones is quickly becoming the “in” thing, and local venues are jumping at the chance to take advantage of its offerings.

As do all things awesome, they came from Japan. I’m talking about QR codes, people, not Godzilla and Mothra. In 1994, a subsidiary of Toyota created Quick Response, a unique type of barcode that allows users to scan and decode data, similar to the barcodes that manufacturers use on their products. Although it was initially intended to track automotive parts during assembly line construction, it’s become popular with smart phone users in Japan and South Korea. The United States, however, has been slow to adopt the technology. The main reason is that few people know about QR codes. That, however, is changing.

One of the most active users of the technology is Jimmy Fallon, who routinely holds an LP-sized QR code before introducing musical acts on Late Night with Jimmy Fallon. Using an appropriate app (RedLaser, QR Code Reader and Scanner, among others) viewers scan the QR code with their phone which directs them to a website that further promotes the featured band. Hollywood, however, is not the only one jumping on the QR bandwagon.

The Children’s Museum of Richmond integrated the technology two weeks ago in two currently-running exhibits. The Living Tree House and Little Farm each have their own QR codes attached to the exhibit signs for museum goers to scan. The scanned QR code links readers to YouTube videos that showcase each exhibit. Although the Children’s Museum has no way to measure how many scans each QR code registers, as of this writing there are 193 views and 57 views of the Living Treehouse and Little Farm videos, respectively. Yet, the Children’s Museum is not the only Richmond venue to incorporate QR codes. 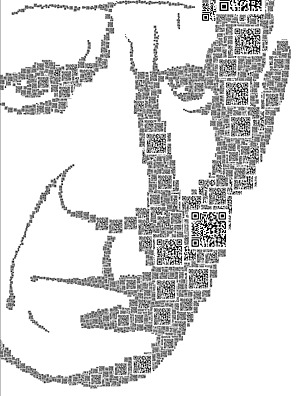 The Virginia Museum of Fine Arts (VMFA) partnered with local advertising titan, the Martin Agency, to utilize the burgeoning popularity of QR codes to promote the recent attendance record-breaking exhibit of Pablo Picasso’s artwork. Artists rendered an image of Picasso made entirely out of the coding’s aesthetic. Clicking on the image linked users to a website with information on the famed artist, as well as an invitation to buy exhibit tickets. Keith Cartwright, svp/group creative director at Martin said, “…we were able to take something technologically functional, QR codes, and use them as building blocks to create something arresting and beautiful.”

With both the Children’s Museum and the VMFA using QR codes, it’s very likely that other venues and promotions will start using the device. And as smart phones grow in ubiquity, there is a strong likelihood that we’ll be seeing more QR codes for a variety of information and entertainment purposes.