The Virginia Historical Society has introduced a searchable online database that will provide the public with essential facts and documents to help trace their ancestry to enslaved Virginians.

The Virginia Historical Society (VHS) has launched an online and searchable database that will help people from all over the world learn about their ancestry. Titled “Unknown No Longer: A Database of Virginia Slave Names,” the free service will be an ever-updating catalog that will feature a sizable portion of the over 8 million records in VHS archives.

Speaking of the benefits that the database will provide users in a telephone interview, Dr. Lauranett Lee, Curator of African American History at the VHS, said that people “can really get down to the nitty-gritty of research.” 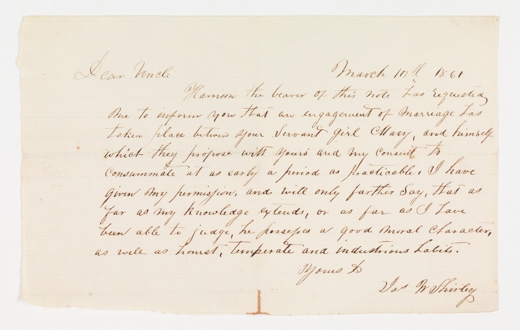 Virginia was the largest slave-owning state until the end of the Civil War. Because slaves were treated as property and not people (in some instances, listed after cattle on property documents), records of familial genealogy are extremely difficult to procure. The new database will provide individuals looking for their Virginia-based genealogical history with these rare documents, documents that have the potential of providing accurate, and previously unknown, family origins. The database, as Dr. Lee said, “helps put flesh on raw data.”

The Virginia Historical Society hired Richmond-based HeliumStudio to design the database. Speaking about the project is Owner and Creative Director, Chris Hull:

Users will be able to search documents using several different criteria: name, occupation, a slave’s purchasing price, plantation name, among others. Dr. Lee recognizes that even the smallest, most seemingly minuscule factoid may inspire a chain reaction of information discovery that can help people uncover their familial origins. “Anything you can find,” said Dr. Lee of what can be a very onerous research process, “is really important.”

In February 2010, the VHS began extracting names from four existing collections. Later that year, Dominion Resources (provider of Virginia’s electricity) became interested in the project. They ultimately awarded the VHS a $100,000 grant.

When the database becomes available for public use later this week over 1,600 names will be accounted for–of which only about 300 will be the names of slave owners, the rest slaves. “This is just the beginning,” said Dr. Lee.

To digitize and upload the database content, items (deeds and slave purchase receipts, among other types of sources) are read and analyzed, entered into the data system (which includes scanning the images), and approved by the Vice President for Collections. “It’s a tedious process,” said Dr. Lee. 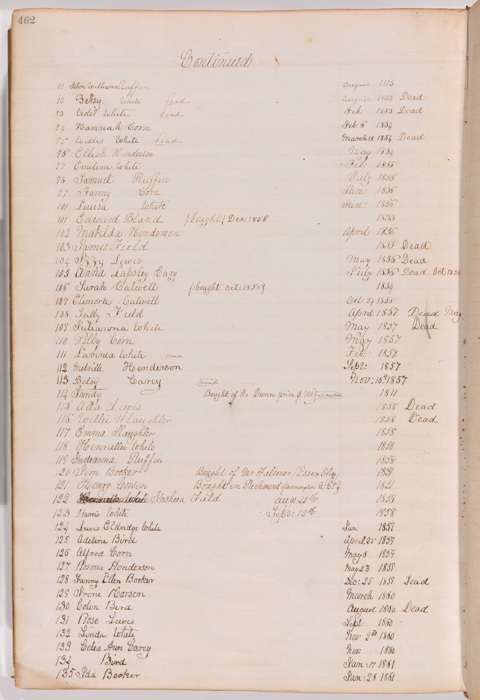 Negros belonging to the estate of Richard Eppes of City Point

Since slave owners are also categorized and documented within the database, descendants of these owners can learn about this aspect of their family’s history. The history of both former and current Virginians “are so intertwined,” said Dr. Lee.

“This service will be of tremendous value to scholars, genealogists and the general public,” says Dr. Katherine Bassard, Professor of English at Virginia Commonwealth University, and author of the recent Transforming Scriptures: African American Women Writers and the Bible. “Because of the importance of names in the enslaved community, having a database that allows us to connect and reconnect these names down through the generations will restore dignity and honor to those who endured slavery in Virginia.” 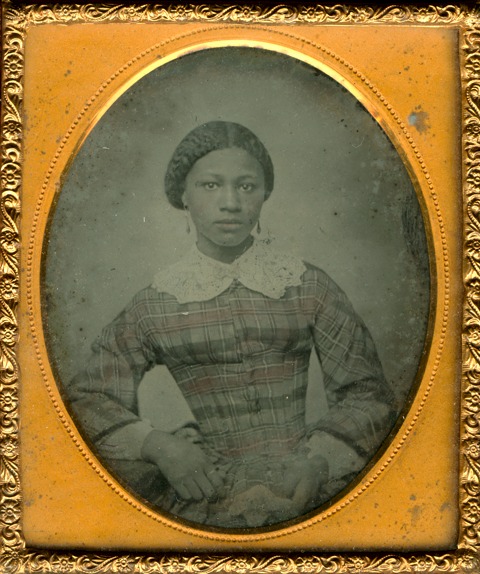 It is Dr. Lee’s hope that those who begin their search online will extend their research process and use the VHS library, where archived documents are available for free and open to the public six days a week. She also hopes that it will inspire individuals to donate historical documents to the VHS to sustain the new database.