We bought a farm: Autumn Campbell and Brian Garretson of Tomten Farm

Owning a farm is physically exhausting and emotionally taxing, but Autumn and Brian are devoted to the idea of growing great food. Autumn Campbell and Brian Garretson are up early, just like they are every day. When the first sunlight slowly spreads across the wall, or maybe before, when their restless roosters–Napoleon, Francisco, and Whitey–just begin to crow, they quietly rise, put on a pot of coffee, and begin another day on the farm. This is their third season as owners of Tomten Farm, a small, diverse operation in Prince Edward County. Autumn and Brian tend to nearly every task on the farm themselves, with occasional help from a seasonal intern. The work is physically exhausting and emotionally taxing, but Autumn and Brian are devoted to the idea of growing great food.

The couple were working on an organic farm in Madison County when an email from VABF sent them on a new course. Autumn recalls, “We instantly fell in love with the property, which was historically the center of a large dairy farm. The owners at the time had been farming organically for four years and had spent two years refurbishing and restoring the home. So in many ways they had set up the space, and it was more ideal than anything we had thought we would be able to buy.”

Since then, the pair have cultivated about two and a half acres of the 18-acre property to grow an array of produce including several varieties of tomato and eggplant, an impressive selection of peppers, and some less common items that are exclusive to Tomten, like purslane and shiso, which grow wild on the grounds. For Campbell and Garretson, farming is all about the food. They both have backgrounds in the culinary industry. For them, creating the best culinary experience means starting with the highest quality ingredients. “We are interested in cultivating a clientele that wants to cook, explore, and frankly eat really good food,” Campbell says.

Brian and Autumn recently shared their vision for the food they grow at their first ever Farm Supper, in collaboration with Sub Rosa Bakery. They had considered hosting a dinner as early as their first year on the farm, but found themselves too busy to plan until, as Autumn explains, a partnership with Sub Rosa bakers Evrim and Evin Dogu began to come together: “Over a year ago when they had the fire, we discussed doing this dinner, mainly because they had time and we all thought it would be fun. Plus they have a great reputation in Richmond, and we thought collaborating with someone on our first dinner would help people take a chance on being fed by a farmer.”

The supper begins with a farm tour, and we fill up our mason jars with wine and beer and, in some brave cases, a trippy, anise-flavored Turkish elixir called Raki for the walk. Brian leads the group around the grounds, calling our attention to the ‘structures,’ dotting the property, reminders of barns and silos long ago overgrown in a particularly enchanting manner by the surrounding vegetation.

The property sprawls on ahead of us. Each garden plot is its own story: vibrant, exceptional tomatoes in one planting, never to be repeated in subsequent attempts; spring brassica making way for fall brassica; basil plants bowing to basil blight, an increasing threat creeping up the east coast. Brian knows the past and future for each patch of land, down to the last detail. He casually recites last three crops to have come out of one plot and the next three they’ve planned for it.

We pass a pen of muscovy ducks, waddling amicably around one another, a couple of them flapping around in a kiddie pool. Brian and Autumn process their ducks by hand, he tells us, and they’re an extremely labor-intensive animal to process, taking one person easily ten times as long as it would take to dress as a chicken, but Brian insists they’re worth the extra effort. “Last year, we got soft and kept a few,” he shrugs.

In another area, a tall grass hybrid, Sorghum Sudangrass, covers row after row. Brian explains that this is supposed to help soften their notoriously difficult, clay-like soil. After just one mowing, its roots will drive down deep into the dense soil, adding essential organic matter and making way for new crops to thrive in its wake. Brian rattles off a list of the crops they’ll try to grow once the sudangrass has done its work. “We’re going to grow rutabaga here,” Brian laughs, pointing to one row, “even though no one likes it.”

A Pyrenees runs the perimeter along an electric fence, trying to get a glimpse of what all the excitement is all about. Brian tells us they got Aleppo, named for one of their favorite peppers, to protect the chickens, but, he says, Aleppo would rather eat them than save them, so they’re kept apart. Their chickens, red rangers and freedom rangers, are not the kind of chicken that’s stuffed into plastic and plopped onto grocery store shelves. That’s the ubiquitous quick-to-maturation, large-breasted cornish cross. These chickens, by contrast, have longer legs and fatter thighs, smaller breasts, and a longer maturation time; all of which results in a deeper flavor, more dark meat, and better quality. 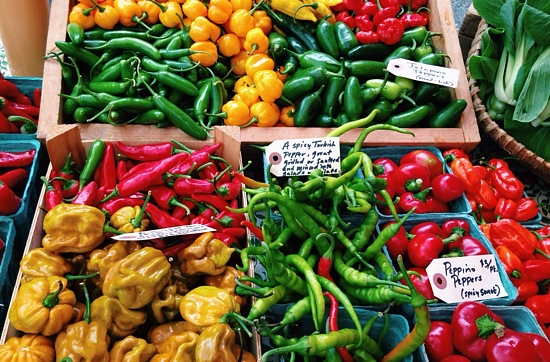 Brian rounds out the tour at a place of pride, the pepper patch. In it are paprika and cubanelles; spicy and mild Seyrecks from Turkey; bright red Lipstick peppers; and a trickster pepper, the aji dolce, which creates the illusion, upon first bite, that you’re in for a world of hurt, scovilles untold, only to playfully scamper off with a sweet, bright finish at the very end. We each chomp a few bites, wincing and then remarking to one another how mild, in fact, they are.

Somewhere between the ducks and the peppers, the sense of how hard these two, sometimes three, people work every day starts to set in. It’s constant movement. Listening to the weather, interpreting the soil, researching, guessing, failing, succeeding in rapid unending succession for months on end. And that’s just the growing part. Then there’s the business of packing everything up twice a week and driving over 60 miles to Richmond, where a combination of weather, market politics, and the mood of the shopping public has the ultimate say in whether or not Tomten Farm will be profitable.

They do it because they love food, the best food. They’re upfront about their struggles, but Autumn says, “we are happy to be located in a place where we can be part of a long-term shift and evolution of how people buy, cook, and think about food.” The tour winds back to three tables set along the black twig apple trees. Everyone refills their drinks and takes a seat, as caruncle’d muscovy ducks waddle by.

The connection between Tomten and Sub Rosa was a natural one. Brian and Autumn have been friends and admirers of Evrim and Evin since meeting as vendors at the William Byrd Community House Market. Autumn elaborates, “We all enjoy cooking with each other and have spent a lot of time together working on menus and focusing the dinner on what we have [an] abundance of right now…This partnership seems especially satisfying, as we are all good friends and have the utmost respect for each other’s craft.”

First a simple but flavorful red pepper soup, Alaca, arrives. Wheat berries and chickpeas add texture to the brothy soup, a chew and a soft pop, respectively. As soon as the last spoonful of soup disappears, platters of food come bobbing out of the kitchen, a seemingly unending procession of dishes, 14 in all, flavored with lemon and garlic, yogurt, cilantro and red onion, almost entirely vegetarian. Eggplant and peppers, in the peak of their season, are the stars of the show. 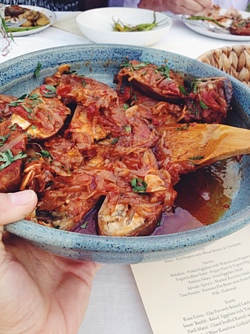 Starters are served family-style and include an unexpectedly rich red pepper and yogurt dip, best enjoyed with Sub Rosa’s pide, or flatbread, which is seasoned with olive oil and sesame seeds. Bowls of fried eggplant salad, mashed zucchini salad, and romano beans with cilantro fill the table. The gem of this course is something called Makdous, an olive-oil-fermented eggplant, stuffed with a paste of red peppers and walnuts. The eggplants flop like fat, oily lobes on the wooden cutting board, oil running onto the white cotton table cloth. At my table, there are eight bloated eggplant, to be shared among five people, and we easily eat them all, wondering at the science behind between each bite.

The main courses take the ingredients even deeper, pairing them with a clay pot lamb preparation and painstakingly hand-rolled chard-stuffed ravioli, simply adorned with perfectly caramelized onions and a thick yogurt sauce. More eggplant, this time baked with tomato and onion, and a platter of grilled Seyreck peppers round out the selection. The Seyrecks are very special, otherwise unseen in Virginia gardens, these seeds came all the way from Turkey to Tomten. They look like long, arthritic fingers and taste somewhat like a banana pepper.

After a salad of arugula, red onion, and black twig apples; the meal comes to an end with a Turkish-style french press coffee service and not one (of course, not just one) but two desserts. Evin’s fig and lemon tarts have a remarkably flaky crust and shine with a fennel-y glaze.

Muhallabieh, a milk pudding with toasted pistachios and bay leaf syrup, is not the type of dessert that most people order for themselves when dining. I can see it now, spoiling in the cooler while orders of flourless chocolate cake fly out to tables, one after another. But to pass up this incarnation of the traditional Turkish dessert would be a mistake. The pudding, traditionally made with flour, milk, and sugar, gets an extra bump from a dollop of Evin’s pastry cream. The dessert is comforting and sweet with just enough crunch from the pistachios. It’s like being told “thank you for coming” in pudding form.

Evrim, Evin, Autumn, and Brian thank us for coming in word form, answering the last few questions, “How exactly do you pickled the eggplant?”1 and “What was that pepper called again,” but the question on everyone’s mind is, “when, please, will all this happen again?”

The next installment of the Farm Supper, this time a Southeast Asian inspired meal that Brian and Autumn are doing all on their own, will be October 5th. And next season, the plan is to host three meals, possibly including a brunch. Whatever the inspiration or ingredient, it’s the concept that’s important for Autumn: “Really we just like the idea of having a small, intimate group of people out on the farm eating family-style with our food, made by us.”