Tucked away in the city’s busy financial district is a new restaurant that opened last week. Despite humble beginnings and not even a full week of being open, Citizen is already Richmond’s best kept secret in the restaurant world.

Whoever Gloria is, she must hate Citizen. When Greg Johnson, a 48 year-old chef who’s lived in Richmond for over thirty years, took over the 909 E. Main St. address, Verizon provided him, not with the 804.780.9098 telephone number that’s currently advertised on his storefront, but with one already owned by a woman–named Gloria.

Several times in the hour that we chat, Greg walks over to the telephone to quiet its incessant ringing in a manner much like a sleep-deprived parent comforting the fragile wails of their newborn in the dead of night.

After lifting the receiver and greeting the unknown caller, there’s a moment of silence as Greg listens to the other end. After a pause, he inevitably replies, “Are you looking for Gloria?” He then explains the predicament that the phone number has caused for the seemingly umpteenth time. Not only does the telephonic screw-up inconvenience Greg and the callers that expect to hear a female voice on the other line, the crossed numbers also means that Gloria is undoubtedly receiving phone calls intended for Greg and Citizen. “She probably hates me,” says Greg.

If Greg is right, and Gloria really does hate the first-time restaurant owner who opened Citizen just four days ago, Gloria is grossly misinformed as to the true character of the new restaurateur. 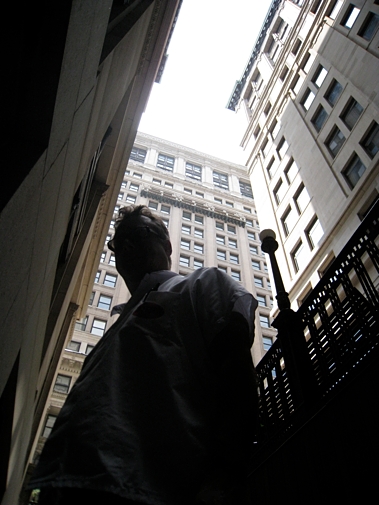 Patches of grey streak across the sides of his once all-brown hair, cut short on the sides and back with a fashionable unkempt pompadour. He and his black rimmed glasses remind me of the geekchic employed by Mark Mothersbaugh, the co-founder of the New Wave band Devo, now modern-day composer–a bit of nerd whisked together with a lot of brilliance. Greg is much younger, however: 48 to Mothersbaugh’s 61. “I wanted to own a restaurant,” says Greg, “before I was 50.” He crossed that endeavor off of his bucket list last Wednesday.

When I arrived at the restaurant at 2pm yesterday afternoon, Greg was in the middle of a rush, an odd phenomenon for restaurants this late in the afternoon. “I get the back wash,” Greg hypothesized, from those seeking lunch after the local food carts in the area have closed. Just prior to the rush arriving, Greg was slicing and peeling cucumbers; there’s a red-handled peeler sitting next to several of the unblemished fruit on a counter in his cozy kitchen. Next to the cucumbers is a large bowl of his recently prepared soup: Tuscan kale, white bean, and sausage. There are two women sitting at a table waiting for their takeout order, as they are dressed nicely, I assume that they work for the City, or the State, or maybe Greg’s next door neighbors, SunTrust. There’s also a young men picking up food whose family member once cooked in the restaurant’s previous incarnation: Clayton’s Cafe. It’s the young man’s first time in the restaurant. I can already tell by his and Greg’s friendly chat, to say nothing of the enticing smells wafting from the kitchen, that it will most certainly not be his last. 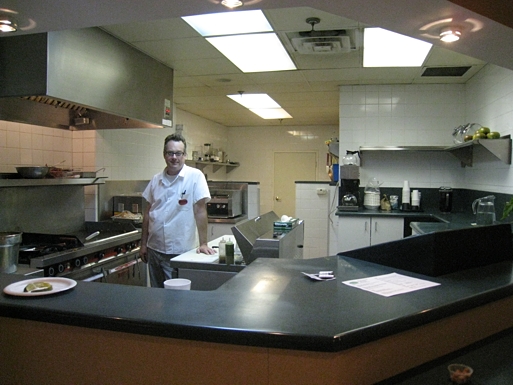 Johnson at home in his new kitchen

While I wait for Greg to finish making sandwiches for the last of the late afternoon rush he gives me chopped beets to sample–beets that look somewhat similar to red potatoes, seasoned with a homemade vinaigrette sauce. I typically avoid beets as the vegetable has never entered my gastronomical purview and, I am skeptical of their deliciousness this late in life. But Greg is so nice and so exudes a confidence in his kitchen prowess that I ultimately acquiesce; a decision that I do not regret. Greg knows that others, like myself, share a misapprehension to the beet–a reason that he calls his own concoction “baby beats,” as in giving his patrons the chance to take baby steps in their appreciation of the unfortunately disreputable vegetable. It’s an appreciation that Greg has had for fruits and vegetables for many years. There will be “no tomatoes in the dead of winter” at the restaurant, he tells me, reinforcing his commitment to using only seasonal ingredients.

He moved to Richmond in 1983, beginning a culinary career that has included restaurants Chez Foushee, Strawberry Street Cafe, The Country Club of Virginia, and most recently, Amuse Restaurant. He says, “I’ve always wanted to own my own place,” and two years before his age 50 deadline, he found out that Clayton’s Cafe’s owner, John King, had put the location on the market just three months ago.

While I swallow the last of the baby beets, Greg tells me that he closed on the location just two weeks ago, buying the existing furniture and fixtures from the now-retired King. With the help of his wife Sheri, his sister, brother, and parents, Greg and his family did nothing but “clean, clean, clean, clean” to prepare the restaurant for its opening. While wealthier owners have no qualms renovating a new restaurant space over a period of months, the “daunting” start-up costs for food financially mandated that Greg open his doors as soon as possible. He is far from done.

He plans to use the courtyard just up the stairs from his new restaurant to seat 20 people. He has applied for an ABC license that will enable him to sell beer and wine, which he would like to begin selling during happy hour this fall. Although now limited to paper plates and plastic forks, Greg will soon buy his own china, which means that he will have to find “at least two” full time kitchen and wait staff to help out. He’s looking forward to employing people, but he’s in no rush; he wants to take stock in his instinct to find the right people rather than just anyone.

In 1983, back when Greg first arrived in Richmond, he saw a restaurant on 14th and Main. He remembers nothing of that restaurant: not the owner, not even the kind of food that the restaurant served, save for one thing: the name.

It’s a name that appeals to Greg. A true citizen means someone who is committed to the city. “I think it’s important to support the city you live in,” he says. “I would like to see our city thrive.” He’s only worked within the city limits since his 1983 arrival, and currently lives with this wife in the Spring Hill neighborhood. He sees Citizen as a place that is “welcoming,” a place where “anybody can come.” Describing his vision for the restaurant, he says, “I wanted it to be metropolitan,” something “laid back, casual, and clean.” Something that sticks out from the glut of mobile food stands. 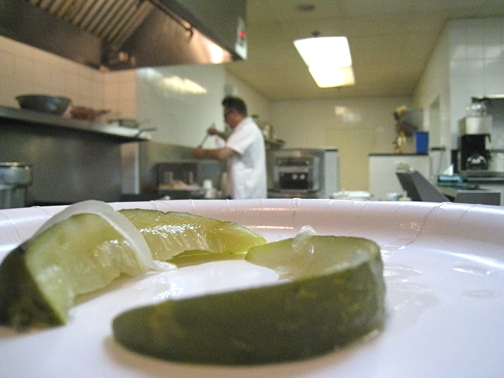 What sets him apart from the many food carts that populate the bustling downtown lunch corridor is that food carts are seasonal; an excessively hot or cold day keeps food cart operators away. Greg loves his neighboring food carts, however, but realizes a limitation, a lack of ambience. Citizen, in contrast, is “more intimate.” Those who do not wish to eat on the sidewalk or return so soon to their office desks can slip away, as well as come in for coffee and breakfast before beginning their day. Each time finding a bit of seclusion amid the work day denizens of downtown Richmond.

Typically the bane of many restaurant owners who rent their space from property owners, Greg has nothing but positive things to say about Parmenter, who he says have been “absolutely awesome.” Parmenter owns the Mutual Building, a 132,434-square-foot office building that has businesses strewn among the basement level (one of Greg’s neighboring businesses is a barber shop that opened in 1976). “They’ve given me everything that I’ve asked for,” says Greg, now sitting down with me at one of his tables, enjoying the quiet that comes when the last of the day’s customers have gone. Case in point: currently patrons who wish to use the bathroom must obtain a key from Greg that will allow them access to an upstairs facility. Not giving customers the obvious convenience of a toilet and a way to wash their hands presents obvious issues. Greg expressed them to Parmenter. They did something that few landlords do with their tenants: agreed.

And so, next week, someone will cut-out a portion of Citizen’s west wall that will allow his customers access to a closer, neighboring bathroom facility. Best of all (and this is the part that’s most shocking) Parmenter will do this without charging Greg a one-time fee or by increasing his rent to offset the costs. Despite this and other plans that Greg has in store for his first restaurant, he seems to relish the notion that Citizen is not as fully upright as he would like it. “I’m going to have to make the food that much better,” he says, not as a sarcastic lamentation, but a call to test his abilities.

At the end of our chat, he gives me a little plastic cup of a key ingredient in his slow-roasted pork sandwich, currently his favorite on the menu. It is part cumin coleslaw, part sauerkraut, with a bit of mustardy relish thrown in for (what I should admit to as being very) good measure. It’s what he uses on the pork instead of cheese, inspired by Cuban sandwiches that require a press to toast the bread, just as Greg does in his own kitchen–“I change all the time. I cook all kinds of things”. It is one of the most tasty components to a sandwich I have ever eaten. Although I am vegan I am envious of my carnivorous contemporaries who will get to scarf-down the sandwich.

Before I leave, the phone rings. I wave goodbye to Greg as he lifts the receiver. As I close the door behind me, I overhear what’s being discussed.

It’s someone asking for Gloria.