If you’ve seen brightly colored (and oddly placed) knits around Richmond, chances are it’s the work of the Knitorious M.E.G. Richmond’s most well-known knitter talks about her latest Christmas-related piece and what parts of the city may soon get a little cozy.

If Broad Street seems a bit more colorful than usual, there’s a good reason. The Knitorious M.E.G. has struck again.

Wrapping nearly the entire metal street pole on the corner of Broad St. and Brook Rd. is a red and white knitted covering that looks like a fuzzy candy cane. Vertically arrayed on the elongated design is “MERRY KNITMAS” in a vibrant Christmas green.

Although her canvas is a very public city, the Knitorious M.E.G. is one of the most reclusive Richmonders. She does not grant one-on-one interviews, and she conducts interviews using a phone number that, supposedly, is not her own.

“Take something everyday and make it surprising.” This, Knitorious–I address her by her knitting nom de plume,–says is her underlying motivation for knitting public objects. “I love Richmond,” she said. “I like adding something to it.” Her inclination to knit, however, is a fairly recent one.

While living in New York City, Knitorious would often see individuals knitting away on the subway. Years later, in early 2009, Knitorious took it up herself. By the summer of 2009, she was covering public objects with her knitting, a process known as “yarn bombing.”

Houston, Texas resident Magda Sayeg, who many regard as the mother of yarn bombing, knitted a cozy for a door handle outside of her boutique in 2005 one day while bored. People took notice. Later, the 2009 book by Mandy Moore (no relation to the actress), Yarn Bombing: The Art of Crochet and Knit Graffiti further inspired crochet and knit art across the country. 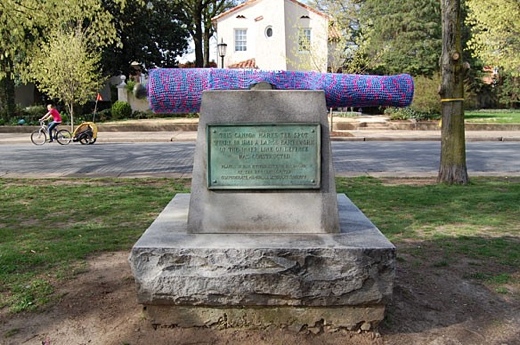 In April, during a year-long commitment to yarn bomb one public object per month, Knitorious undertook her most time consuming yarn bomb of all. Sandwiched between the Robert E. Lee and Jefferson Davis statues on Monument Avenue is a cannon that marks a 1861 earthwork constructed to defend Richmond from Union troops. While she knits much of her yarn bomb material at home before installation, she could be on site for quite awhile depending on the size of the project. At approximately 1:30am, Knitorious applied a large cozy for the cannon, a process that took roughly an hour and a half.

While some of her yarn bombs have remained for several months after their installation, the “knit cannon” didn’t even last twenty-four hours–a brief existence that Knitorious attributes to the nearby residents. Most of Richmond, however, seem largely appreciative Knitorious’s contribution. “I’ve not heard one negative comment yet,” she said. Some are even following in her foot steps.

Yarn bombs have been seen scattered throughout the Museum District, VCU’s Monroe Park campus, as well as in Short Pump, yarn bombs for which Knitorious is not responsible. “I’m always encouraging,” says Knitorious about those who take up knitting and yarn bombing.

Her local fame has inspired a few individuals to solicit Knitorious for private work. While the idea of artistic patronage would cause the mouths of many artists to water, she doesn’t want her work to be enjoyed privately. “I like to keep it public,” she says. 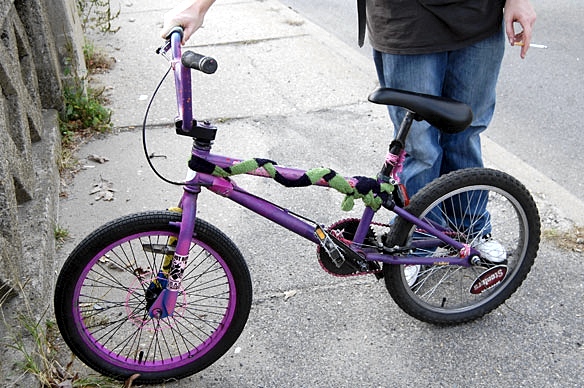 She recalls taking pictures of her November yarn bomb, a pink and yellow cozy for a decorative oval on Mayo Bridge. In the middle of documenting her work, a young man rode up to her on his bicycle. He asked her if she knew the identity of the mysterious Richmond knitter. She said that she did not. He then extolled the work of hers that he had seen, which inspired him to cover a small bit of his BMX bicycle with knitting. It is this type of response that bolsters Knitorious’ motivation to continue warming Richmond with her homemade artwork.

Knitorious plans to continue yarn bombing at least one object per month during the forthcoming year, “I’m not going to stop,” she said. She hopes to broaden her typical knitting territory to include areas she has yet to populate with her knit bombs, such as the Northside. “I would like to do more downtown,” she told me, although she has reservations about retaining her anonymity in such a highly monitored portion of the city.

People look forward to her knit bombs, which has an encouraging effect on her work. “I think it’s even more fun now,” she says. “I wouldn’t be doing it if it wasn’t fun.”

photos courtesy of The Knitorious M.E.G.