The Infectious ‘Flair’ of Chef Nate

One of Richmond’s most talented chefs and colorful characters will be closing the love of his life, Louisiana Flair, later today. By knowing what the city and restaurant means to Nate, we can know what the restaurant and Nate means to us. And why we can’t let him go.

Louisiana Flair ran out of food at 2:30pm yesterday. The same happened the day before, and will likely happen today when it closes up shop at Grace and 2nd streets in Downtown. Everybody’s trying to “get a little bit more,” says Chef Nate cracking a maudlin smile, one with more holes than teeth. We sit together at a table while his cooks clean the kitchen and his waitress restock condiments. He’s wearing black and white checkered pants and a t-shirt from the River City Blues Society’s 2nd annual Bobby Olive concert series. Zydeco plays out of speakers above us. Strewn across the walls are knickknacks, artifacts, and various Louisiana-inspired flair.

Born in Mandeville, Louisiana, Chef Nate was cooking at the age of 9. He relocated to Richmond in 1996 in a move done to preserve his life.

“I was strung-out on drugs,” he says. “Starting to get clean.” He worked under his brother at his siblings’ construction company. Not long after, he decided “couldn’t take it anymore.”

What he couldn’t take was not being around the smells and the heat of the kitchen. His kitchen (or whatever kitchen he happens to be in) strikes me as being a sort of sanctuary where he is free from the devilishness that drug addiction inflicts upon the mind.

In October 2006, Nate opened Louisiana Flair. “I love the food,” he says, speaking of the New Orleans food that he grew up with. He waves his hand around, directing me to the various flair that crowd its walls. “Mostly everything is from New Orleans.” Much of this everything was provided by friends and customers, past natives of the city, or simply those passing through who left with a relic that they wanted to leave on the walls of Louisiana Flair.

“This is my love,” says Nate of his restaurant. He speaks as if Louisiana Flair is not a restaurant, but a girlfriend, a first girlfriend. “I work 12, 14, 16 hour days. I love her this much so I will work this much.” After tomorrow his love affair will end. “This is my true love. She just got snatched from my heart.” This snatching was not sudden, but rather a gradual ending of the relationship.

It began 2 ½ years ago. “We lost hundreds of people,” says Nate. The people he’s referring to are not his people. On second thought, however, they were his people, the people that were laid off by Media General and the Richmond Times Dispatch. Located mere blocks away from both of these company’s respected buildings (Media General owns the Times Dispatch) the jettisoning of employees made Nate’s lunch-time crowd dwindle to unsustainable levels; he estimates that he’s taken a 65% hit, eventually running the business “out of my bank account.” 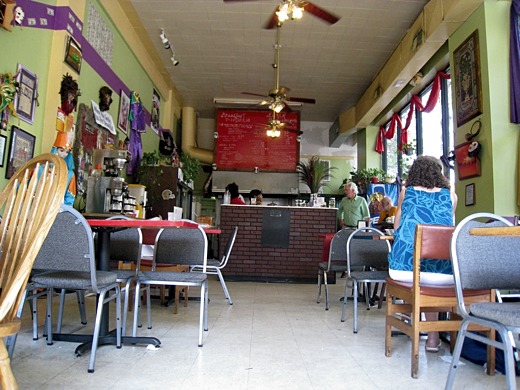 “I’m putting my reputation on the line with every dish that I put out.” Nate remembers one customer, who sat where I sit while the two of us talk, who licked his plate clean after eating his meal. Nate refers to this as the “ultimate praise.”

When he announced three weeks ago that he would close there was an immense outcry of sadness and disappointment. It even inspired a Save Louisiana Flair Facebook page. “[People] were all saying they didn’t want us to close.”

I ask him about his plans to open a new restaurant, and I mistakenly use a word that displeases Nate, albeit convivially. It is not if, he says, but when.

He is in the process of scouting locations for a new restaurant–one that he hopes will be larger than the current space, and one that will have off-street parking. In a delectable twist of the norm, Nate will post potential locations on his website for his customers and friends to scout. If they like it, he’ll take it. If they don’t, he won’t. “My customers are the reason why I’m here. Why not have them be a part in every aspect?”

I ask him if he thinks about moving back to Louisiana. “All the time,” he says. I ask him the inevitable: why doesn’t he? 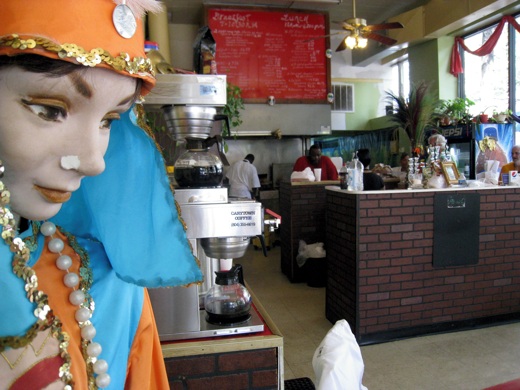 “I’ve got 600 reasons.” He means both customers and staff. “They are my heart and soul.” He both serves and employs “ex-cons, ex-addicts…everyone here has issues,” he says affectionately. “No employer would ever love them like I do.”

He pauses. Cracks a grin, exposing teeth that are very similar to himself–imperfect and charming. “And thank you for staying alive so you can come by another day.”

It’s unfortunate that I met Nate for the first time on the eve of Louisiana Flair’s last day. He smiles when he shakes my hand. And I leave through the doorway that will close for good later today. “When you walk into my door,” said Nate at one point during our chat, “you walk into my heart.” I trust that I and many others will walk through that door again.

Even if we had never really left in the first place.