Les Mis had a surprising influence on the South during the Civil War. Civil war? What does that mean? Is there any foreign war? Isn’t every war fought between men, between brothers? Victor Hugo, Les Misérables

Unless you’ve been living under a rock, or have an extreme hatred for musicals, you’ve probably heard of Les Misérables. Recently turned into an Academy Award-winning film starring Hugh Jackman and Russell Crowe, and a Broadway staple for decades, Les Misérables was first a critically-acclaimed French novel by author Victor Hugo. It’s a story of redemption and struggle, a story about a paroled convict named Jean Valjean who tries to escape his past and turn his life around–all set against the backdrop of political unrest and rebellion.

I grew up with Les Misérables. My parents took me to see the musical when I was 12, and I have fond memories of my brother and I building our own barricade made out of chairs and couch cushions in our living room. I’m always fascinated when my personal fandoms collide, so I was amazed to read about the impact that the book had on the American Civil War. 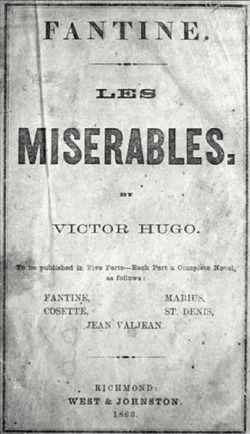 Les Misérables was released and translated for American audiences in 1862, and the book was a huge hit worldwide. It was basically the 1860s equivalent of the Harry Potter series–not exactly critically-acclaimed, but loved by the public. The novel had a particularly strong impact within the Confederacy, who identified with the themes of rebellion and suffering for a cause. West & Johnston, a Richmond publisher, printed the book for Confederate audiences in the capital and throughout the South. Despite serious shortages of paper and ink, they managed to print the book in a serialized form, splitting it into pamphlets that they released separately from their office on Main Street. The pamphlets featured “inferior ink, bad type, and worse paper,”1 but the public was happy to pay to find out what happened next in the story.

It’s important to note that the version West & Johnston printed was significantly censored for Confederate audiences. Hugo, a known abolitionist, made several political statements and commented on the evils of slavery throughout the book. These portions of the story were written off by the publisher as “rather rambling dissertations on political and other matters of a purely local character”[^1] and were removed in the Confederate version. Union audiences read the full uncensored version, political commentary included.

It wasn’t just the citizens of the Confederacy who were moved by the story of Jean Valjean–the story also resonated with soldiers. John Esten Cooke, one of J.E.B. Stuart’s aides, said:

Gaunt figures in their tattered jackets bending over the dingy pamphlets – ‘Fantine,’ or ‘Cosette,’ or ‘Marius,’ or ‘St. Denis,’ and the woes of ‘Jean Valjean,” the old galley-slave, found an echo in the hearts of these brave soldiers, immersed in the trenches and fettered by duty to their muskets or their cannon.

Despite their love for the novel, the Southern soldiers had a bit of trouble pronouncing the French title. Referring to the story instead as “Lee’s Miserables”, they soon took the name for themselves after their commander Gen. Robert E. Lee. “Lee’s Miserables” felt like an accurate reflection of the Army of Northern Virginia as they trudged through the muddy trenches of Petersburg with scant food or equipment. As the summer of 1864 came to a close, soon the cold winter weather in the trenches would make “Lee’s Miserables” an even more accurate nickname.