Over the last several years, Bobby Kruger has become a staple of Richmond’s craft cocktail scene. Part science with a splash of art thrown in the mix, Bobby is giving Richmond tastebuds a whole new appreciation for cocktails.

If you need a drink, just about any bartender will do. However, if you need something more than just any drink, then Bobby Kruger is your man. He knows exactly how Richmonders like their drinks, and he knows the stories behind them.

In the context of nightlife, the term mixology affords a more artful, and even scientific, study of cocktail preparation. Bobby Kruger is one of the city’s best and best known mixologists–although you wouldn’t gather that by talking with him.

“It’s all about what you have at your disposal,” says the soft-spoken bartender. He approaches cocktails from a “mathematical and analytical” angle, one far more advanced than someone who thinks that mixing grape Kool-Aid, Red Bull, and low-end vodka is some sort of profound cocktail breakthrough. No, there’s far more to it than that.

While attending Thomas Dale High School in Chester, VA, Bobby and a close friend were fond of throwing parties that featured alcohol. It was then that Bobby became enamored with the various bottles and flavors that arrayed the shelves of the ABC store. It wasn’t just another example of a high school student having a good time before the legal drinking age–it was the origins of a future career (note: Bobby’s birthday is St. Patrick’s Day; see the sidebar below for his special St. Patty’s/Bobby’s “birthday” cocktail you can make at home).

In 2001, he “got into the restaurant scene” by working at Surf Fish Station in the Museum District, a spot later taken over by Bandito’s. In May 2003, he moved to Julep’s where he worked as a waiter. During the busy times, the bar would find itself in need of an extra pair of hands and would call upon any available waitstaff. “I was always the first one to volunteer,” said Bobby. After a brief move to Chez Foushee and then Acacia where he got his “first real taste of trying to run a bar,” he returned to Julep’s where he served as Beverage Director and Bar Manager, the position he held until August 2011. During this time he cultivated his approach to molecular mixology and helped establish the Mint Julep as a signature drink at the Shockoe Bottom restaurant. 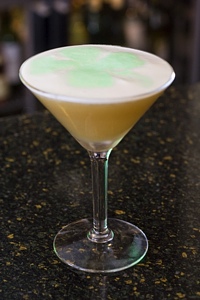 Put all ingredients except Creme De Menthe into a shaker and shake without ice for 30 seconds. Add ice and shake for another ten seconds. Strain into a glass and mist Creme de Menthe on top of drink.

Over the past several years, Bobby said he has seen “a lot of changes” when it comes to Richmond’s drinking habits. Not only has he seen a rise in the popularity of craft beers, but when it comes to cocktails, the mixologist (who works with twenty homemade mixers each night) sees “a continuing evolution of people wanting more quality out of their experience.” Fresh juices and organic ingredients are what people want in their cocktails and an overall “return to quality” in their nightlife libations. Not only are “fresh” and “organic” the new buzzwords in mixology, but an interest towards classic drinks is also seeing a resurgence.

Among those classics is the Clover Club, which dates back to the 1910s and features gin, lemon juice, Grenadine, and an egg white. Other vintage drinks experiencing new life are The Monkey Gland and the Sidecar. Not only do drinkers want a taste of these classic concoctions, but also the stories behind them. This lends to what Bobby calls “part education, part libation” to describe the modus operandi of the modern cocktail drinker.

One reason that Bobby is such a credible expert when it comes to cocktail connoisseurship is simply his position in the bar–both figuratively and literally. “You get to read people,” he said. It gives him an “experience with the human condition” from a multitude of personality types in various stages of drunkenness. Richard Braunstein famously said that “The hard part about being a bartender is figuring out who is drunk and who is just stupid.” Bobby’s infectious geniality doesn’t come close to sharing that cynical sentiment.

“I love making the drinks almost as much as I love interacting with people,” he said. “So many of my close friends are people I’ve met behind the bar.” However, interacting with people outside of the bar isn’t always so easy for him. He said that he typically falls asleep no earlier than 3am (“I’ve trained myself to be up until the wee hours of the morning”). He’s currently dating a woman who works more typical daytime hours. Due to their contrasting schedules, they tend to meet up for lunch during the week (lunchtime for most is breakfast time for Bobby). “It’s definitely a commitment,” he said about his lifestyle, one that is fueled by Richmond.

“I love the food culture here,” said Bobby. He’s been offered positions in large-market cities, including a recent offer that would have relocated him to New York City. While he said that he would like to “get into one of the larger market” cities in the future, he said that it hasn’t “felt right” just yet. Enjoying his current home makes things even harder to leave. “I love this city,” he said. “There’s so much character and diversity here.”

Recently, he worked under prominent restauranteur, Jimmy Sneed, at the latter’s newest spot, BlowToad. Bobby said the move was to allow him to gain management knowledge from one of the best restaurant owners in the region. “The level the guy is on,” said Bobby, far exceeds others in the business.

Even more recently, however, Bobby has moved to Bistro 27, which will put him in one of the city’s most talked-about restaurants, as well as give him the chance to run its beverage program, beginning on March 17th.

One day, he wants to create a restaurant and bar that unify both the dinner and beverage menus into a single experience. He lamented that most restaurants conceive of their food menu first and add beverages last, sometimes as a mere afterthought to the dining experience. “Food and beverage go hand-in-hand,” he said and should be designed as such. “We don’t really have a whole lot of that right now,” said Bobby–something that he hopes will change in the future. In the meantime, the soft-spoken mixologist will continue to hone and expand his skills at Bistro 27, to the benefit of Richmond tastebuds.