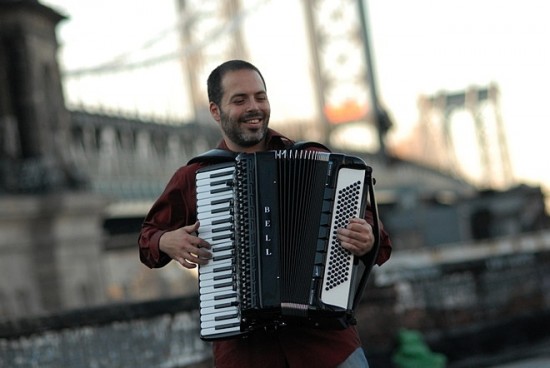 The sounds of Brazil’s lilting, romantic bossa novas and swaying sambas are known throughout the world, but in the dry northeast interior of Brazil there is a different musical force. Forró Pé De Serra All Stars is dedicated to a distinctive style of music from Northeast Brazil. The group performs traditional forró pé de serra with a sensibility born of New York City’s diverse and dynamic musical culture, while continuing a joyous Brazilian tradition that welcomes all comers.

Forró is social music created at the turn of the last century from the melding of Portuguese button-accordion tunes and African rhythms. In the cowboy culture of the rocky, arid Brazilian sertão, the word “forró” became a catchall phrase for the music, the dance style, and the event. A forró can last all night long, with couples young and old dancing close, legs locked, rocking to the infectious rhythms of the sanfona (accordion), the zabumba (a type of bass drum), the triangle and the rabeca, a unique Brazilian folk-fiddle.

The term “forró” may have derived in the early 1900s from the English expression “for all.” English construction workers on the Great Western Railroad would throw balls, some for railroad personnel only and some for the general populace, or “for all.” Another theory is that it came from “forrobodó,” meaning “great party” or “commotion.” Whatever its origin, forró became associated with a unique musical style that emerged in Northeast Brazil’s ranching culture. In the 1940s, accordionist and singer Luiz Gonzaga, brought the music to Rio de Janeiro and became forro’s first big star. Idolized by the city’s migrants from the Northeast, Gonzaga blazed the trail for other northeastern musicians, who have enjoyed national popularity from the 1960s forward. His music continues to inspire new generations of forró fanatics around the world.

Forró Pé De Serra All Stars is led by master accordionist Rob Curto, who spent years in Brazil studying and playing with legendary forró musicians Dominguinhos and Arlindo dos Oito Baixos. Curto’s musical collaborations include performing and recording with Lila Downs, David Krakauer, Frank London, and Kiran Ahluwalia. Joining Curto are some of the finest Brazilian musicians from the U.S. and abroad. Scott Kettner is a master percussionist, and founder of Brazilian-American dance bands Nation Beat and Maracatu New York. Liliana Araújo is one of the most celebrated Brazilian singers in the U.S. today, bringing the music of the Northeast, and her native state of Ceará, to national audiences as the lead singer of Nation Beat, Forró da Madame, and Maracatu New York. Zé Maurício is an original member of the internationally recognized percussion ensemble, “Cyro Baptista’s: Beat the Donkey,” and recorded the Grammy-winning Obrigado Brazil! with Yo-Yo Ma. From Brazil is special guest Cláudio Rabeca, a master of the rabeca and traditional Northeast styles including forró, maracatu rural, coco, and maracatu. Cláudio leads the popular forró ensemble Quarteto Olinda, and engages in solo projects that foster appreciation of the rabeca and its place in Brazilian musical tradition.