Thor: The Dark World: But, like, the dumb kind of dark

Beautiful meathead wields hammer in attempt to save the world. You’d think there’d be something compelling about that. As far as comic book heroes go, you don’t hear a lot of clamoring for Thor. He’s part of the Marvel family, sure, but for some reason Thor’s “Norse God with Magic Hammer” doesn’t trump Iron Man’s “Rich Guy in Suit.” Blame the earnestness of Asgard, I guess. Maybe it’s less interesting when a guy’s royal duty is to keep the peace between realms than when a guy defeats incredible odds while a piece of shrapnel hovers perilously close to his heart. I don’t know, folks, are we becoming a little too choosy here?

I myself was late to both, cheerfully going along my ignorant way in life until I was stopped short by the inescapable charm of Robert Downey, Jr.1 and Chris Hemsworth2.  And now, crap, I’m stuck in Marvel world, for better or for worse. 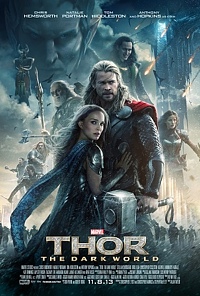 And sometimes it’s for so, so much worse. Thor: The Dark World piles a boring plot, a lackluster script, and a director who seems to be in way over his head together to form a simplistic, tedious waste of celluloid. I know! You expected better! The first one, directed by Kenneth Branagh, was fairly good! The Frost Giants were a little hokey, and Thor’s banter isn’t exactly comic genius, but an enormously muscled Norse god kicking back in New Mexico in a flannel shirt is bound to please. Plus: Hawkeye!

This one has little comedy at all and zero flannel shirts. There’s one scene where Thor, in full regalia, hilariously boards the London tube, as the astonished passengers snap photos with their smartphones. He grabs a pole, and when the car jerks, the woman next to him steadies herself by placing a hand on his seriously ripped chest. Their expressions are priceless, his a stifled smirk, hers…well, exactly the expression I was making throughout the entire film. But that’s just one lone moment of self-awareness. There are some cameos, but they feel forced, and Thor in revenge mode is too noble to be bothered with making jokes.

Plus, ugh, when you introduce a new villain, you’ve got to make him or her make sense within the entire framework. These one-off “Oh, you thought the last one was bad, turns out this one is WORSE” dudes don’t do anyone any favors. It just means we get the same themes, the same plot, and the same rhythm as the last iteration, and without an entertaining script to back it up, it begins to feel like we’re all being tortured in the Asgard prisons.3

Dr. Jane Foster, played by a Natalie Portman who I guess makes questionable decisions sometimes, continues to be sexually frustrated by her Asgardian prince. She’s been spending the last two years moping around, while her mentor Erik (Stellan Skarsgård) has been onto some bigger stuff. Some SCIENCE stuff. I guess Science is picking up on the fact that all of the Nine Realms are about to align for like a day. Somehow this is related to how these Dark Elves of yesteryear hid a dangerous fluid deep in the Dark World or something or other. I honestly can’t remember. All I know is that the Dark Elves looked like they should be hanging around Mos Eisley Cantina and that Thor’s evil-ish adopted brother Loki wasn’t in the film enough. Oh, and there were shirts. Lots and lots of shirts.

There are connections between worlds, due to this realm convergence, and the only purpose it serves is to let people run through convenient wormholes to get to other parts of London. Meanwhile, Mos Eisley guy is trying to get at his dangerous liquid, which has decided to set up shop within Jane Foster’s body. Will Loki help? Will he betray everyone? Who can tell? Besides everybody!

I did find some salvation at the end of the film, when my friend (who had already grimly asked me exactly what on earth I had just dragged him to) and I were peacing out during the credits. An exasperated supernerd reminded us in the most contemptuous tones possible that there was another scene on the horizon. This isn’t my first rodeo, guy. But I had weighed seeing Samuel L. Jackson stalk around in an eyepatch for the umpteenth time against getting in my car and trying as hard as I could to forget about the last two hours of my life. I had decided on blissful ignorance, but I found it difficult to let that unfortunate soul down. It was so important to him that we not be total morons and waste one moment of precious Marvel time.

And the result was just that. A wasted moment. Mind your own biz, supernerds of the world. I’ll leave a movie when I want to.

Maybe the theater will jerk and you will get a chance to steady yourself on Thor’s chest. That’s about all I can think of.

Pick your reason! Any reason!

Surprisingly enough, it passed handily! Jane Foster and her intern Darcy talk about science a fair amount. Jane Foster talks to some Asgard ladies, also about science. Then she talks to Thor’s mom about a couple of things. AND she kind of saved the world while Thor punched some dudes around. Go get it, Jane!