A quiet weather pattern in the upcoming days meant we that we were going to have to cut our trip short. We had one more chase day, and we went all in to try to find our tornado.

We had one last chance to see a tornado. Saturday (May 19th) was going to be our only big chance at severe thunderstorms.

“We need a storm,” trip leader Dave Carroll repeated multiple times in the 24 hours leading up to our chase. He didn’t mean that we just needed to find a thunderstorm–we needed to maximize our chances for finding a tornado.

There was a lot of pressure on this chase day. We knew at this point that the weather in the days following would make chasing opportunities very limited. Rather than stay out burning money on a limited budget, we made a decision to come back home beginning Sunday. It meant that our chase would consist of a total of two storm days, while spending twice as many days on the road to and from the plains. It also meant that we wouldn’t be out chasing on May 22nd, traditionally one of the best dates for our group.1

A low pressure system moving into Nebraska during the day Saturday was forecast to spawn thunderstorms in eastern Nebraska and Kansas, with a 5% tornado risk in a small area near the Kansas-Nebraska border.

That was our play. We had to figure out exactly where and when to be to intercept storms, and time was not on our side. National Weather Service forecasts from the Storm Prediction Center and local forecast offices indicated that developing storms would remain discrete, before forming into storm clusters and squall lines within about 90 minutes of initiation. Discrete storms are desired because they’re not competing with other storms to develop, meaning they have the best environment for things like tornado development.

Mammatus clouds - a sign of sinking air - loom overhead as we travel north on US 81 near the Kansas-Nebraska border.

Storms began firing after 3pm, and we left our post in Belleville, Kansas, and headed south. However, we quickly turned around and headed back north toward Nebraska, where a pair of storms had developed and were looking very attractive on radar.

Despite reports of a funnel cloud from the northern storm in the image above, no tornado was ever confirmed by the National Weather Service from either storm.

Chasing a wall cloud, a lowered cloud below the base of a thunderstorm, along US 81. Wall clouds are often the sign that a thunderstorm may be strong enough to spawn a tornado.

We rolled east, playing tag with these storms as they morphed into a squall line, eventually passing us to the east. We were feeling a bit dejected as we stopped for dinner in Beatrice (pronounced bee-AT-triss)2, Nebraska. We knew this was our last chase day, and while there was still daylight left, it felt like there wasn’t much else for us to chase. Our dinner was cut short and spirits lifted, however, by news from the chase leaders: there were storms developing just to our west that we had a chance to pursue. We scarfed down dinner, piled back into the vans, and raced north. 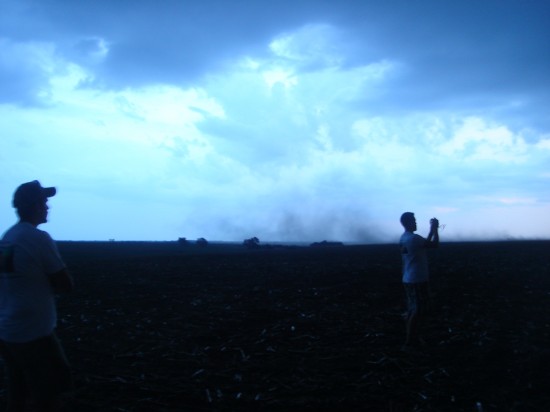 Hokie Storm Chasers Peter Gleichauf (left) and Henry Cantrell (right) watch a thunderstorm pass over while a gustnado passes behind them.

Daylight dwindled as we danced with this storm cluster, observing another well-defined wall cloud and having more than one close encounter with a gustnado. We turned north after dark, lightning illuminating the horizon as we made our way back to the interstate and back home. We didn’t get a tornado this trip, but it wasn’t a total loss. As I write these last few words, the crew is heading back out on the road, starting the second leg of the trip with some fresh faces. They’re looking at a chase in either Texas or Oklahoma on Tuesday, and plan to be out until the second weekend in June. I hope their trip is much more successful than ours was.

The sun sets behind our chase vehicles at a rest area somewhere on Interstate 70 in Indiana.