The Lone Ranger: The glory days of (someone else’s) childhood

Maybe if I’d been alive in the first half of the 20th Century, I’d be able to overlook this overblown film’s flaws, but I was too busy trying desperately to become a human being, sooooo… Now might not be the best time to spend $225 million on a movie about the Lone Ranger and his sidekick Tonto. The best time would have been, like, 1950. Or maybe 1970, when people who loved the show were now grown-up and ready to wade into a happy puddle of nostalgia. Although, back then, $225 million would probably be enough to buy a small country, so that might not have been a good time either. 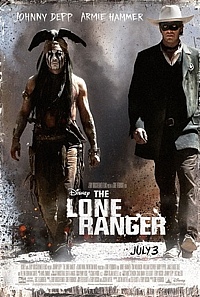 But its irrelevance for today’s viewers is only one of this doomed Disney flick’s issues. It labors under a torturously slow screenplay by two writers (Ted Elliott, Pirates of the Caribbean: 1-6,1 and Justin Haythe, Revolutionary Road) who should definitely know better. It misses a huge opportunity to try and undo some of the racist damage cheerfully inflicted by the original series. And its action sequences, although relatively free from gratuitous explosions, are about as excitingly choreographed as a middle school dance.

But really, I just keep coming back to the fact that no one in this film’s audience gives a flying horse about a masked guy charging around the desert. We’ve got very little connection to that dude, if we can even remember who he is, and that nostalgic eye-glisten that we’re missing is probably the only thing that could have saved a film like this one.

The sad thing, too, is that The Lone Ranger had a whole lot of good elements! Gore Verbinski (Pirates) is a talented director (rumor has it that Johnny Depp wouldn’t play Tonto without ol’ Verbinski at the helm), and there were so many sweeping shots of the American West that I began to consider a vacation. Johnny himself is decent but not really necessary to play this boring Comanche, and I found Armie Hammer (The Social Network) to be extremely talented-I-mean-handsome-I-mean-talented.

But even extremely tall drinks of water cannot quench the thirst of a nostalgic film that doesn’t inspire nostalgia. Particularly one that stretches a lame 80-minute plot past the two hour mark.

What happens is, see, the Lone Ranger gets an origin story (maybe he already had one? I dunno). He’s filling in for his big bro, Dan, who gets killed by a Western Bad Guy named Butch Cavendish (could be a traditional villain for the franchise? No idea). LR meets Tonto (Depp) who is also looking for this Butch fellow, and everything gets played out as (I assume) a normal LR episode would play out—bad guys are brought to justice, a helpless female is saved, and horses gallop on top of trains.

SPEAKING of trains, the film’s climax centers on a dual-train action scene with the pacing, humor, and excitement of a decent film. Everyone’s bustling around, leaping off bridges and onto other trains, unhooking cars from each other, throwing coal, jamming the accelerator thing, and just generally being funny, exciting, and adventurous. It seems sacrilegious, but Buster Keaton’s 1926 silent film The General came to mind,2 such was its entertainingness. Throughout the scene, the William Tell Overture (aka the Lone Ranger Theme) (pretty sure) blares semi-comically, and for a second, just ONE second, I thought, “Maybe those elderly Lone Ranger fans are onto something!”

Unfortunately, I’d been subjected to this joke over and over again for the previous 2.5 hours:

Lone Ranger: “I’m saying something exasperated!”
Tonto: <long silence as he sniffs the wind or hands someone a feather>
Lone Ranger: “What are you DOING?? Some sort of INDIAN MUMBO JUMBO?”
Tonto: “Consulting spirits. They say big white man is stupid.”

Those elderly fans are welcome to it.

If you enjoy a good, lengthy action sequence. Also, there are a couple of really funny lines scattered about, and Armie Hammer delivers them charmingly. That guy will probably smile at all of us and turn us to jelly and take us for his personal servants at some point, so you should probably get acquainted. I do recommend skipping the first two hours of the movie, though. The spirits tell me it is stupid.

You aren’t amused by slapstick, absurdly racist undertones, and remedial movie plots that were probably written on the back of a napkin by someone who was saying, “I mean, look how easy it would be to write this script.”

Considering the only two women in the movie were a helpless mom (Ruth Wilson, Anna Karenina) and a hooker with a heart of gold (Helena Bonham-Carter, Sweeney Todd), who never cross paths once, I’d say no. But on the bright side, one of them does have a pointless ivory leg!