Pirates of the Caribbean: On Stranger Tides (Not Really)

I predict the next episode in this overlong series will go straight to DVD, joining the likes of The Little Mermaid 20: Original Fin and Aladdin 14: Turns Out Prince Ali Is a Real Guy, and He’s Pissed. Ho hum, ho hum, a pirate’s life for me.

As always, it’s a dark day for me when Johnny Depp can’t save a movie, especially when that movie is backed by a trilogy of well-made romps that range from pretty great to seriously great. But Pirates of the Caribbean: On Stranger Tides, the fourth installment of a series that had already reached a comfortable stopping point, is not entirely unlike one of its own nautical zombies: a reanimated corpse that sluggishly resembles the original, only without any of its vim and/or vigor. 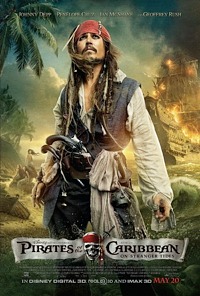 My sister, who has been my fellow unashamed POTC fan since the first iteration came out eight years ago (gasp), leaned over to me during the opening credits and asked, “Quick, does anyone even remember what happened in the last one?” Nope! In my memory, it was just a convoluted yet still enjoyable tangle of dreadlocks, cutlasses, and Orlando Blooms. Luckily, On Stranger Tides doesn’t ask you to recall a single moment from any of the previous films (except for a few “Believe me, I’m PRETTY familiar with danger,” type of lines that the main characters keep saying to make us laugh knowingly). Capt. Jack Sparrow finds himself on a quest to discover the Fountain of Youth, along with the semi-supernatural Captain Blackbeard (Ian McShane) and his seaworthy daughter Angelica (Penelope Cruz), who happens to be one of Jack’s jilted lovers. Unluckily for all, both the Spanish and the English are also after the Fountain, with the typically clueless English navy getting a wooden leg-up on the competition with the help of their new captain, a “reformed” Barbossa (Geoffrey Rush).

Well, the rest is….what it is. Obstacles present themselves (for instance, you have to have a mermaid’s tear to activate the Fountain’s waters, duh), and Sparrow gets himself into lots of scrapes. The whip-smart script and genius timing was what carried the last three films (particularly the first), but in this one, the waters are a little diluted. A lot diluted, actually. The special effects are decent,* the action scenes entertaining, and the jokes smile-inducing, but nothing went out of its way to surprise, delight, or intrigue (besides an adorable cameo during the opening chapter).

In fact, even JD’s Sparrow was a little subdued, or perhaps he needs a frustrated Keira Knightley or a noble Orlando Bloom to really help him reach his former eccentric heights. Those two are missing, sadly, and though Cruz storms around admirably, her character is one-dimensional and just plain uninteresting. Blackbeard, however, has the makings of an interesting fellow, but we don’t linger long enough with him to get a sense of who he is and why he’s so diabolical.**

Pirates of the Caribbean: Heave Ho or Whatever is not a bad movie, just a forgettable one. And, up against its sometimes-brilliant predecessors, its sail never feels fully unfurled. Although, for a movie based on a Disney ride, maybe our expectations are just a little too high.

Don’t worry, JD, we’ll always have the DVDs. It’s still, for the most part, a pirate’s life for me.

* I have to say, I did not expect vampiric mermaids to scare me as much as they did.
** The Wikipedia article, though, is very enlightening, especially that fancy shmancy picture.