Zombies return to Carytown on Saturday

While many are watching The Walking Dead on AMC, Richmonders don’t have to rely on television to see a throng of undead parading around in post-apocalyptic pettishness. The 7th Annual Richmond Zombie Walk will take place this weekend. Here’s how the event started, what charity it supports, and just how many hundreds of zombies we can expect in Carytown this Saturday.

According to the Richmond Zombie Walk website, today’s events have been postponed until later in the day on account of the inclement weather. The walk will begin in Carytown around 4:30pm. Participants are asked to gather at Byrd Park at 3pm.

Roughly 300 people met at Monroe Park two weeks ago to take part in the Occupy Richmond protest. If history is any indication, there will be more than double that amount in Carytown this Saturday.

And they will all be zombies.

The 7th Annual Richmond Zombie Walk will take place in broad daylight within the Carytown corridor, beginning at approximately 2pm. “There aren’t too many public events around Halloween,” in the area, says Anthony Menez, one of two organizers for the Richmond event. “There’s nothing like this [the zombie walk] here.”

The Richmond Zombie Walk started in 2005 through the coordination of Roger Barr, who had heard of similar events, notably in Toronto. He created ZombieWalk.com as a place for people to organize zombie walks across the country. When scouting a location for a Richmond walk, the then-recently opened Short Pump Mall seemed to be perfect. 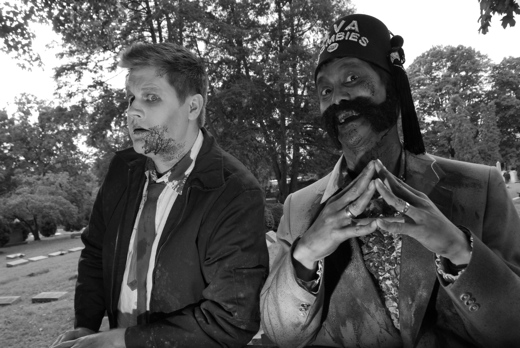 “I worked with Roger,” says Anthony, as Circuit City web designers in 2004. Barr’s plan was to organize a cloak-and-dagger flash mob of about 100 people, which, says Anthony, required “a lot of calling and emailing people.” Ultimately, local police got wind of the event and threatened the would-be group with arrests. Wishing to remain law-abiding citizens, but resolute in creating a successful zombie walk somewhere in Richmond, they decided that Carytown was a perfect alternative.

So in 2005, zombies shambled first through Carytown and then down to VCU, where they entered the Cabell Library. “What the hell is going on?” is the look that Anthony saw on onlookers’ faces throughout that first walk. Afterwards, despite a few snafus, everyone thought the event “went off pretty well.”

Every year that the Zombie Walk takes place, there is an uptick of participants. First 150, then 400, and by last year the horde had grown to 600 reanimated dead. As the turnout increased, and as public recognition and appreciation of the yearly event spread, Anthony kept thinking “we can turn this into something.” That something came out of personal loss.

In 2006, Anthony’s father-in-law was diagnosed with lung cancer. The grieving and difficulties that follow when cancer afflicts a family member made Anthony respond in a positive way. “I wanted to do something.” 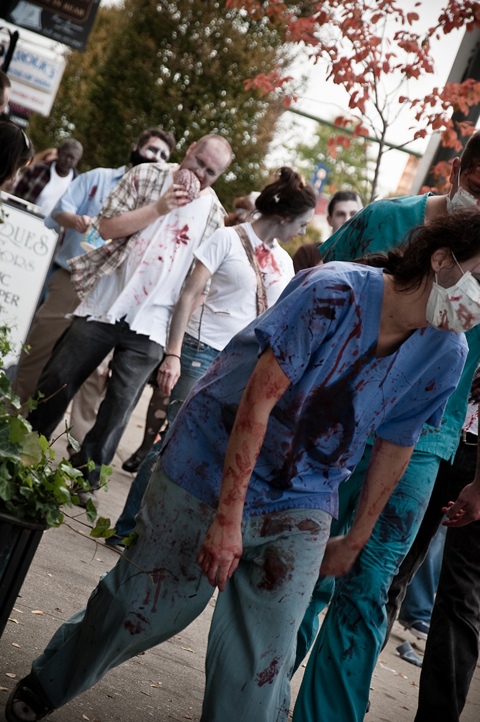 Beginning in 2007, the Richmond Zombie Walk began raising money for the American Cancer Society. All donations are placed in Anthony’s father-in-law’s name, who died as a result of his lung cancer. “As attendance grows,” says Anthony, “donations follow.” Last year, the Zombie Walk raised $1,000.

Just as in previous years, zombie walkers will meet at Byrd Park at 1pm, were the Zombie Walk rules will be reaffirmed:

With 600 stumbling ghouls, including zombie families and zombie children, wrangling so many of the living dead in a not so terribly spacious location presents logistical challenges. “We don’t want to get in the way of traffic,” says Anthony. As such, the zombies restrict themselves to the sidewalk, and they cross the street to the other side of Cary on only once during the 45 minute walk–at the opposite end of Carytown from where they begin. Anthony remembers being at the front of the zombie line last year. When he and the others in front reached Cary Court, they looked across the street to see a wake of undead still connected–the rear of the line nearly stretching the entire length of Carytown in a single file of zombie flesh. Anthony is still bowled over at how many people continue to participate. The event, he says, is still “gaining a lot of momentum.” If trends continue, this year’s walk could bring out 800 zombies.

Despite the crowd concerns, both business owners and police seem to have no issues with the annual event. “There’s usually a large crowd at Carytown just to see the Zombie Walk,” says Anthony. To deal with the increasing crowds, police officers have helped the group cross the street during their walk, and shop and restaurant owners have vocally appreciated the foot traffic of both zombies and spectators.

“Just doing the event itself is so much fun,” says Anthony. “It’s a labor of love.”