A strong area of low pressure is moving into the mid-Atlantic, bringing with it buckets of moisture. Grab the umbrella – it’s going to be a rainy one today.

It’s been a relatively quiet start to 2012. Temperatures have been on a bit of a rollercoaster – highs went from 65 on the first down to 35 on the 3rd and back to 68 by the 6th, and other than 0.19” of rain we picked up Monday, January has been mostly dry.

That all comes to an end today. A strong area of low pressure has fired off some storms in Alabama overnight last night, and is bringing a healthy batch of Gulf moisture with it. As it gets closer, it will begin pulling in additional moisture from the Atlantic, giving us no shortage of precipitation over the next day or so. Rain is already moving into the mountains of southwest Virginia, where flood watches have been posted as some areas may seen up to 2” of rain in the next two days. 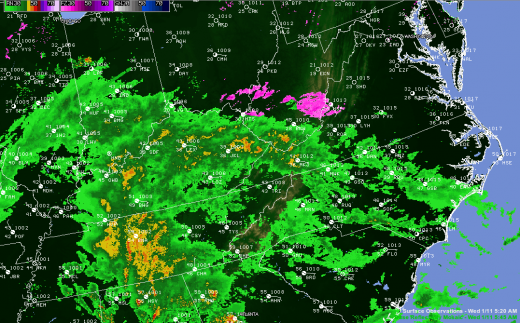 Wednesday: Temperatures are hanging out near freezing this morning as a thick cloud deck begins to move in ahead of this low. Some of the rain you’re seeing on the radar image above will disperse as the showers move east, but don’t be surprised to see our first rain showers by lunchtime. Keep your umbrella and rain gear handy all day today – showers will continue into the night. We’re likely hitting our low for the day as I write this or soon after, temperatures will continue to climb through the day as warm, moist air from the south advects into Virginia. Look for temperatures to hang out in the mid to upper 40s from this evening into Thursday morning. Total rainfall tonight will be anywhere from 1/2 to 1”, with the heaviest showers coming during the afternoon and evening. Tonight’s PM commute could get extra tough; plan accordingly.

Thursday: The rain begins to taper off in the overnight hours, and should be completely ended by sunrise. Winds will shift, coming from the southwest, breaking up some of the clouds and allowing some sun to help temperatures get into the mid 50s. Skies will still be partly cloudy through afternoon and evening, with winds gusting up to 20 mph. Temperatures will cool off rapidly after sunset Thursday night, falling into the mid 30s by Friday morning.

Friday: The low lifts off to the northeast pretty quickly, and we’re left with sunny skies and colder weather in its wake. Partly to mostly sunny skies will be in store, with highs in the low 40s. Continued gusty winds will help it feel even colder, with wind chills in the upper 30s to near 40 at times. Temperatures fall into the upper 20s Friday night. West winds will continue to be gusty all day, reaching 20 mph again during the peak of the day.

There are some long-term signals that we’re going to transition to a more zonal pattern, swinging some weak systems through every couple days. These would mean some clouds and some temperature fluctuations, but nothing too extreme in terms of either precipitation or temperature. There are also some hints that we may get at least a temporary shot of some cold air in the coming weeks, giving us one of the major ingredients for some of that sought-after snow. At this point in the season, I’m not quick to jump on any solutions that give us quick, serious shots of cold air.

As an aside, one of the biggest things keeping us from getting more cold air this season? The lack of a snowpack. Snow provides a positive feedback, where the presence of snow on the ground helps keep reflect solar radiation and keeps air temperatures colder. Just a little something to think about.