The National Weather Service has issued a TORNADO WATCH until 8pm for pretty much all of eastern Virginia from the Blue Ridge Mountains eastward to the Atlantic south of northern Virginia.

The National Weather Service has issued a TORNADO WATCH until 8pm for pretty much all of eastern Virginia from the Blue Ridge Mountains eastward to the Atlantic, with the exception of northern Virginia.

A very sharp cold front crossing the mountains today, combined with some incredibly warm, moist air flowing in from the southwest, is creating a very favorable environment for thunderstorms today. After some radar-indicated tornado warnings in far southwest Virginia, storms are now becoming severe again as they cross over the Blue Ridge and into the Piedmont.

Multiple reports of hail and damaging winds have been submitted this afternoon, and these likely will continue as the storms move east and into a more favorable environment. 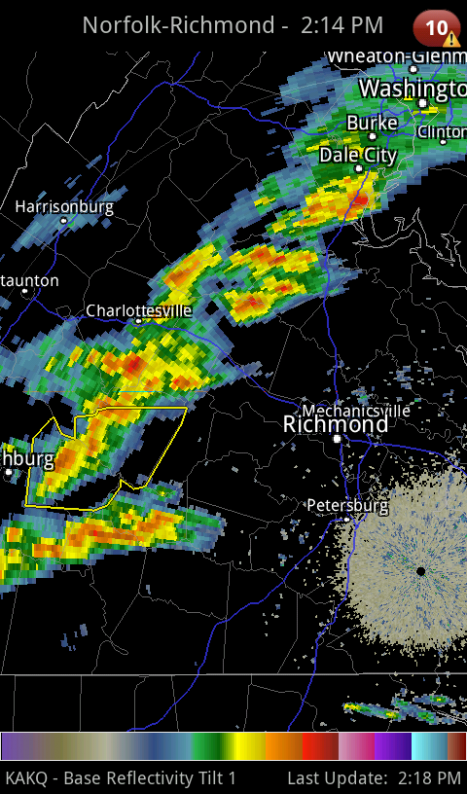 I already see the leading edge of one storm out ahead of the line beginning to move into Amelia County now; this will be ahead of the main line, but the entire Richmond metro will be under the gun within the next hour.

The biggest concerns with this system as it passes through are going to be damaging wind gusts – with the rain and snowmelt we’ve already had this week, the ground is pretty saturated; it won’t take a lot to bring some trees and power lines down. Additionally, hail near 1” in diameter has been developing in some of these storms.

These are also FAST MOVING storms – upwards of 60 mph in some cases. If you’re notified of a severe thunderstorm or tornado warning, it is going to be imperative that you take immediate action to get to safety. You aren’t going to have much time to get inside or to a safe place once the skies turn dark.

While the first line represents most of the threat, there have been individual cells developing behind the line that have also received severe thunderstorm warnings. Continue to keep an eye on the weather until the tornado watch is cancelled or expires.

Temperatures are going to drop this evening after the front passes, and we’re going to return to cooler weather for the weekend. I’ll be back later this evening with a full weekend update.