The week ahead: Mild for Thanksgiving, colder this weekend

Gorgeous weather for one of the busiest travel days of the year is certainly a good thing, and it’s going to stick around through Thanksgiving Day. More cold air is on the way for this weekend, unfortunately. Heading to Blacksburg on Saturday? Grab a few extra layers- you’re going to need them.

Welcome to the the beginning of what may be the five craziest days outside of the five days prior to Christmas.

Luckily for all of us here in Virginia – and for most people around the country, the weather’s pretty great. If you’re not on the Pacific coast, or in Idaho or Montana, then your odds are pretty good that you’re not seeing anything in the way of significant weather. 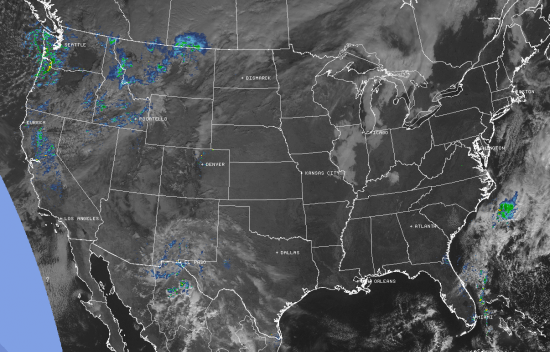 Unless you’re in the Midwest. O’Hare Airport in Chicago is current reporting a visibility of only 2 miles, which is way up from the 1/8 mile it reported at 8:00 am. Ceilings (the height of the cloud deck) are only a couple hundred feet off the ground, so pilots aren’t able to see the runway until they’re virtually on top of it. Midway Airport on the southeastern side of the city is up to 3 miles now, after being down to 1/16 mile at 9:00 am. The story is similar in St. Louis, where visibility is currently only 3/4 mile and the ceiling is a whopping 200 feet.

Flight delays? You got ’em. So much so that the website for the FAA flight delay reporting system has crashed.

Great weather will continue to be the story for both Thanksgiving Day and Friday, thanks to a big ridge of high pressure lodged along the entirety of the east coast. Temperatures are already in the mid 50s today, and there’s no doubt that we’ll see highs in the 60s tomorrow – absolutely spectacular for any November holiday.

That ridge begins to break down on Friday as a large area of much colder air begins to work its way down from western Canada. Here’s a look at temperatures in the US an Canada from 9:00 this morning: 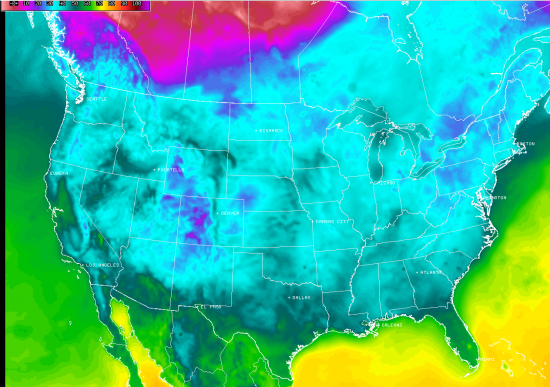 The sun had just come up in the last hour over the east coast, and it was still dark across the west, but temperatures were fairly uniform across most of the country – in the 10s and 20s in the coldest spots way up in the Rockies, and in the 30s and 40s across most of the eastern US aside from the Gulf Coast.

See that big purple patch up in Canada? Those are temperatures that are in the positive single digits and below zero. And they’re coming our way. Here’s a look at the NAM model for 7am Saturday morning: 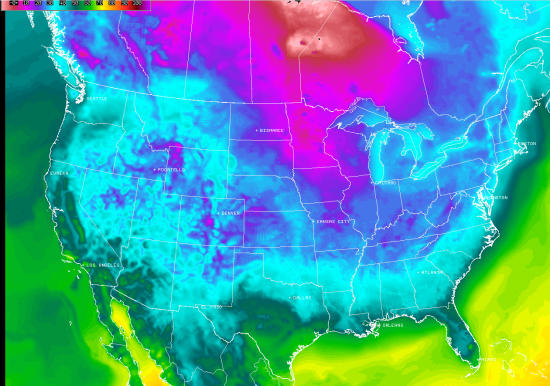 While the coldest of the air will remain up toward the Great Lakes and in Canada, we will get quite the cold snap beginning Saturday. Clouds will begin to increase Friday afternoon and evening. There’s not a whole lot of moisture with this system, so I don’t think well see much in the way of rain, but there’s a chance for a sprinkle or two on Saturday as the front blows through and the cold air comes crashing in behind it.

Here’s the temperature forecast for the next week:

That crash Friday night and Saturday is your cold front.

Speaking of cold, if you’re headed to Blacksburg on Saturday for the Virginia-Virginia Tech game – bundle up. If you think the mid 40s will be cold, Blacksburg is looking at a high of 36 with wind gusts near 30 miles per hour, putting wind chills in the low to mid 20s. It’s going to be an icebox out there, folks.

Temperatures will stay in the same ballpark – upper 40s and low 50s – into early next week. The next cold front moves into the picture next Tuesday and Wednesday, and we just might get a little bit of rain out of that one.

In the meantime, enjoy the warm weather while it lasts, and stay warm this weekend. I wish all of you safe travels and a Happy Thanksgiving.