150 years ago one of the baddest badasses of Richmond fought in his last duel: newspaper editor John Moncure Daniel. “Phil, it’s pretty late in the Civil War, you’ve been doing this column for a while, and surely we’ve run out of interesting characters from Richmond’s Civil War history, right?”

Today I’m going to tell you about one of the baddest badasses of Richmond. No, he wasn’t a Confederate general or an officer in one of Richmond’s POW prisons. He was a newspaper editor named John Moncure Daniel. Before becoming the editor of the Richmond Examiner at the start of the Civil War, Daniel had a career as both a librarian and a diplomat serving under President James Buchanan. Sounding more badass by the minute, right? OK OK, I’ll get to the good stuff. 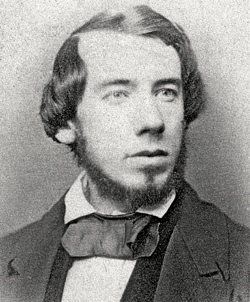 During the war, Daniel was famous for being a firebrand with a printing press. He was a man of very strong opinions and made them known throughout the city of Richmond in the Examiner. He was particularly critical of the administration of Confederate President Jefferson Davis and took bold stances against him when it wasn’t politically popular to do so. His fearless editorial opinions made him well-liked by the public-at-large, but for those with whom he disagreed, he was pretty much hated. Daniel wouldn’t shy away from conflict off the newspaper page either, so when someone made their displeasure known…it tended to escalate quickly.

Over the course of his life, Daniel fought in nine duels, several of them stemming from opinions he expressed in the Examiner. He was once challenged to a duel by a young poet by the name of Edgar Allen Poe:

In 1848, Poe was again in Richmond. Hearing that Daniel had made disparaging remarks about him and his close friendship with Sarah Whitman, Poe sent Daniel a challenge, and, apparently primed with alcohol, went to the Examiner office to demand satisfaction. Poe walked into Daniel’s office and found him sitting with two pistols on his desk. The editor asked the poet to sit down. Daniel said that he did not care to have the matter get to the police, that they could settle the dispute between them then and there. The newspaper premises were roomy enough, and the pistols were ready. Poe is reported to have suddenly grown sober…the two agreed that they should resolve their differences. Bridges, Peter; Pen of Fire: John Moncure Daniel

After deciding not to proceed with the duel, the two joined friends at a nearby tavern where Poe recited some poetry. The men went on to have an interesting friendship, where Daniel did much to promote Poe’s genius as a poet, but also didn’t shy away from criticizing his work either. At one point, he even offered him a job at the Examiner.

Daniel’s final duel took place in August of 1864. How he had managed to not get shot in the previous eight duels is a bit of an impressive mystery to me, but in this last one, he was a little less lucky. That summer, the Examiner wrote a piece of gossip about an unnamed high-level official in the Confederate Treasury using (and subsequently losing) ill-gotten government funds in one of the many gambling halls in Richmond. The treasurer, a man named Edward C. Elmore, assumed the article referred to him and wrote a letter to Daniel demanding an apology. After a few back and forth letters, a seemingly inevitable challenge for a duel came from Elmore and Daniel accepted.

The duel took place at dawn on August 16th and the Richmond Whig reported the story:

The chivalry, as well as non-combatants, for the first time for many a day, were thrown into an excitement this morning by a rumor that a hostile meeting had taken place between John M. Daniel, Esq., of the Richmond Examiner, and E. C. Elmore, Confederate States Treasurer. The current report is that the meeting took place at 5 1/2 o’clock this morning, on Dill’s farm, two miles north of the city.

Mr. H. Rives Pollard, of the Examiner, acted as the friend of Mr. Daniel, and Lieut. Thomas Taylor, of S. C., as the friend of Mr. Elmore. The weapons used, it is said, were the ordinary smooth-bore duelling pistols; the distance ten paces. Only two shots were exchanged, Mr. Daniel being wounded at the second fire in the flesh part of the right leg, a few inches above the ankle. His wound, though not dangerous, is said to be very painful. Richmond Whig, 8/17/1864

So, while Daniel finally did end up getting shot in a duel, he managed to dodge death one last time and escape with just a minor flesh wound. Daniel must have expected a more deadly outcome because he had updated his last will and testament just a few days before the duel. To be fair to Daniel, however, the odds were stacked against him. During a brief stint as a Confederate soldier at Gaines’ Mill in 1862, he was shot and wounded in his right arm and could no longer lift a pistol with it. He fired with his left hand during the duel with Elmore and missed his shot.

Daniel spent some time recovering after his final duel, but was back on his feet and managing the Examiner in a few months. As things began to appear more dire for the Confederacy and the siege of Petersburg continued, he kept up his editorial onslaught of the Davis administration. In April 1865, Daniel fell ill with pneumonia and passed away in his home just three days before Richmond fell into Union hands. There was some speculation that his recent wounding made him more susceptible to illness, but there’s no way to know for sure.

While he held strong opinions on the Confederacy, he held out hope until the end that they would succeed in winning the war. His death spared him one more insult: the fires that swept out of control through the city in the wake of the Confederate evacuation did not spare the Examiner. Daniel’s offices, and all the printing equipment, were destroyed. The Examiner and J.M. Daniel were no more, followed shortly after by the Confederacy itself.