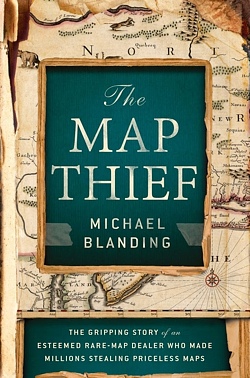 Though he was once part of an elite circle of antiquarian map dealers, E. Forbes Smiley’s career came to an abrupt end when he was caught stealing maps from the Yale University library. In The Map Thief, Michael Blanding details not only Smiley’s elusive career and eventual downfall but digs deep into the fascinating world of rare maps.

The Map Thief catches readers from the start as it begins with Smiley’s end. With detail that rivals the best heist films, Blanding describes the steps Smiley took on the day he was caught and the glaring mistake he made that set the library staff, and eventually the police, on his trail. From there, the book makes a perfect parallel into the world of antiquarian maps while also becoming somewhat of a history of Smiley’s life. As Blanding discusses the paths that led Smiley toward map dealing, he details the oldest and rarest maps the man was aching to find.

While history buffs will certainly find themselves in a world of joy here, the style and pace of The Map Thief has much to offer for those just dipping their toes into non-fiction. 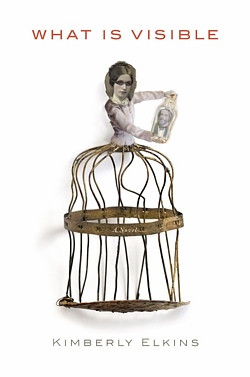 At the age of two, scarlet fever steals all but Laura Bridgman’s sense of touch. At seven, she is taken to the Perkins Institute, where she is placed under the direct care of Dr. Samuel Gridley Howe and is taught to read, write, and sign. Before long, news of Laura’s miraculous abilities spreads, making her one of the most famous women of the nineteenth century. But alone in her thoughts, Laura questions herself, the role of god and her possibilities for the future.

From her meeting with Helen Keller in the first pages back to her childhood with Dickens and Dorthea Dix, What Is Visible is peppered with a historical who’s who. But despite her famous visitors, the novel’s most compelling character is Laura Bridgman herself. Feisty, whip-smart, and witty, Laura alternates between moments of unfailing self-confidence and harrowing self-pity as she watches the world evolve around her. Elkins crawls into Laura’s mind while also digging deep into the issues that impacted those at the Perkins Institute and in the country as a whole.

Despite what Laura lacks, the novel is lush with sensory images. Laura’s sense of touch is magnified tenfold, which Elkins captures as clearly as Laura’s desire to taste, see, and hear. Through her fingertips, What Is Visible fills the spaces between the lines of Laura Bridgman’s history with the story of a vibrantly real, endlessly fascinating young woman. 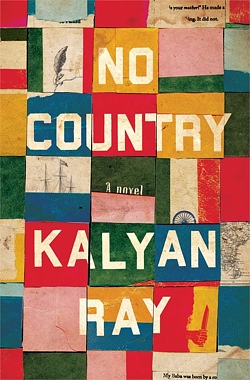 No Country opens in 1989, when an Indian-American couple is found murdered in their upstate New York home. Within a few pages, the novel shifts to introduce best friends Brendan and Padraig in 1840′s Ireland. Through a series of events, Padraig is forced to leave behind his love, Brigid, and winds up headed for Calcutta on a ship chartered by the East India Trading Company. Brendan is unable to help Brigid survive the Great Famine, but manages to escape to America with Padraig’s daughter in hopes of starting life anew. No Country traces the branches of Padraig’s family as they grow outward from Ireland toward the United States and India, weaving forward through history toward the present.

From the beginning, Ray establishes the center of his story firmly in Brendan and Padraig. As children and decades tumble forward, each is connected to the pair through the questions they ask and the home they seek. Though the coincidental links between characters can feel like a stretch at times, the story is told on a grand, cinematic scale that makes anything seem possible.

The patchwork of the novel’s cover is reflected in the historical events pieced together to form major marking points throughout the story; the Irish War of Independence, the partition of India, the Triangle Shirtwaist fire. Yet, the strength of No Country is in the moments between those landmark events.

Even as the eye glances away from the painting, even before I turn the glossy stiffness of the page, I think how the miraculous and the mundane must exist side by side to make possible these ageless moments–these loci of inward radiance–surrounded by the everyday earth and light. They become a pentimento in my memories, so that the unforgetable can be held in the palm of memory.

Throughout the novel, “the miraculous and the mundane” are handled with equal measure. The color of a mother’s hair is described with the same care as the tragedy of a deadly fire. All the while, Ray seamlessly adjusts his style to the era of his narrator, able to make passages shine regardless of the voice behind them.

Over several continents, multiple decades and hundreds of pages Kalyan Ray turns over complicated ideas of identity and belonging beyond what we usually see in our stories. Yet, through the layered perspective of several splintered family journeys, it’s possible to see just what it means to have No Country. 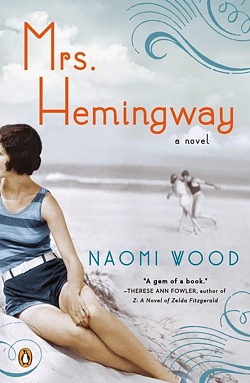 Hadley, Pauline, Martha, and Mary were the four women who called themselves Mrs. Hemingway. In sections that stretch from Paris in the 1920’s through the Florida Keys to 1960’s Idaho, Naomi Wood relays the stories of the women who loved the infamous writer.

The magic of Mrs. Hemingway is Wood’s ability to make readers feel frustration and spite toward a mistress in one section but feel empathy toward her as a wife in the next. While each of Hemingway’s wives is set apart with a distinct personality, the impact he has on all of their lives binds them together in a unique way.

Ernest and the woman laugh as they shelter under the eave until the woman says something and looks ready to leave. Ernest watches her walk away, but his stare is one of accomplishment, as if, later in the night, he will come to possess what he appears to be losing now.

Mrs. Hemingway’s prose is stunningly effortless and moves with a lovely, constant cadence. Throughout the novel, Wood finds ways to bring new light to otherwise worn commentary on marriage, particularly in the section from the perspective of Mary as she grieves Hemingway’s death. Though bookstores are well stocked with “Mrs.” and “Wife” titles, Mrs. Hemingway is one that truly deserves to stand apart from the others.