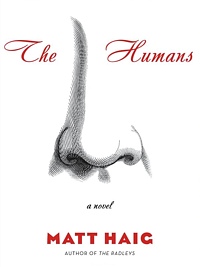 Matt Haig’s new novel The Humans is narrated by an alien sent to inhabit the body of a professor in order to prevent him from sharing his world-altering mathematical discovery with those around him. What seems like a simple task becomes increasingly difficult as the narrator’s disgust toward the human race gradually turns to affection.

It is in the early, fumbling moments of the narrator’s journey that Matt Haig’s keen sense of observation stands out the strongest. Naked and hungry, but unable to properly handle either situation according to Earthly standards, “Professor Andrew Martin” ponders the rules humans have established to govern their species. These hilariously critical anecdotes fill almost every page in the first few chapters of The Humans, giving readers endless quotes to highlight and share.

As things stood, there weren’t even two fun days. They only had Saturdays, because Mondays were a little bit too close to Sundays for Sunday’s liking, as if Monday were a collapsed star in the week’s solar system, with an excessive gravitational pull. In other words, one seventh of human days worked quite well. The other six weren’t very good, and five of those were roughly the same day stuck on repeat.”

While the entirety of The Humans has subtle notes of humor, there is a shift in tone as Professor Martin navigates his way toward his home, family, and ultimate mission. What starts as a funny satire of our ridiculous quirks becomes a careful examination of the very things that make us human: sacrifice, forgiveness, and love. Certainly not the sci-fi novel it might look like at first glance, Matt Haig has written a book that causes readers to consider the flaws in humanity while also appreciating its powerful beauty.

Pilgrim’s Wilderness: A Story of Faith and Madness on the Alaska Frontier 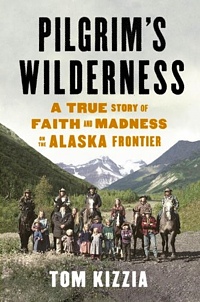 Tom Kizzia’s forthcoming book, Pilgrim’s Wilderness: A Story of Faith and Madness on the Alaska Frontier, recounts the story of Papa Pilgrim, who set up an ideal Christian homestead with his wife and fifteen children in the small town of McCarthy, Alaska. Initially welcomed to Alaska’s remote wilderness by those in the area for their gentle manner and charming musical ability, the Pilgrim family soon starts to divide the community as they begin clashing with the National Park Service over their property rights.

Tom Kizzia’s time living in McCarthy allows him to uncover Papa Pilgrim’s past as Robert Allen Hale, a Texas teenager with a surprisingly tangled history, while also getting close enough to the family to sense their hidden turmoil. As the family’s struggle with the government grows, cracks in their once solid foundation reveal the years of controlling abuse Papa Pilgrim has used to keep them under his thumb.

Fascinating from dozens of angles, Pilgrim’s Wilderness starts as a lens into extreme Christianity, environmentalism, and government property rights. However, the book soon morphs to examine the rigid hold that a charismatic, but crazed, storyteller can have on a group and the trail of damage he can leave behind. 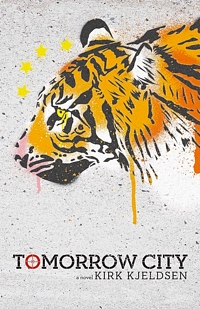 Kirk Kjeldsen and his first novel Tomorrow City were brought to my attention due in part to his connection to Richmond. Kjeldsen is an assistant professor in the cinema department at Virginia Commonwealth University, however he lives in Shanghai and teaches classes online. His background in film and experience in China provided him with a perfect canvas for the events of Tomorrow City.

Recently released from prison but quickly getting back on his feet, Brendan Lavin is enticed by the money offered to him if he helps with the robbery of an armored car. Though he plans for the robbery to be his last, plans go horribly wrong and Brendan is forced to flee the country to avoid being returned to jail. Twelve years later, living under a false name with a wife and child in Shanghai, Brendan has completely changed his life for the better. But when the men from his past find him and threaten to kill his family, Brendan must decide if he will risk everything to take part in the risky robbery of a diamond merchant.

At just under 200 pages, Tomorrow City is a quick read that’s hard not to fly through in one sitting. Within the first few pages, Kjeldsen establishes his fast pace and does not let go until the end. His film background is clear, as most of the novel can be easily imagined on the screen, and movies like The Town and Killing Them Softly quickly come to mind while reading. Tomorrow City is a strong debut from a unique perspective that’s surprisingly hard to put down. 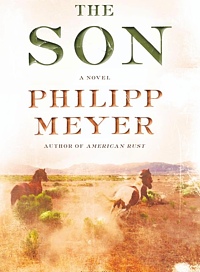 I let my copy of The Son sit for too long before picking it up in late June. So, even though it was published two months ago, I had to share.

Philipp Meyer’s The Son focuses on three generations of The McCulloughs, a family made wealthy through years of oil drilling on their vast Texas ranch. In alternating chapters, the novel begins with the family’s patriarch Eli McCullough, who is kidnapped by the Comanches prior to the Civil War and slowly adopted by the tribe. Haunted by an incident involving his landholding Mexican neighbors and unwilling to fully prescribe to the McCullough way of life, Eli’s son Peter struggles to find his place in the early 20th century. Jeanne Anne, Eli’s great-granddaughter, looks back from modern day on her life as a fiercely independent businesswoman, wife, and mother.

It occurred to me, as I watched the oil flow down the hill, that soon there will be nothing left to subdue the pride of men. There is nothing we will not have mastered, except, of course, ourselves.”

Meyer’s novel starts small, allowing the reader to navigate both the McCullough family tree and the book’s structure in short snapshots, but gradually builds to beautiful chapters that more deeply explore each character. The Son is a perfect example of successful plot building with a non-traditional narrative; despite a jumping timeline, it is easy to follow and feels like a fully examined world.

The Son breaches a number of topics in its journey through the centuries: success, power, feminism, war, legacy. Instead of leaving trails of each theme throughout his novel, Meyer weaves them into the plot, making connections through the bloodlines of his central characters. Each generation must live with the choices of the one before them while also trying to carve out a life of their own.

That struggle to find a compromise between the ideals of her great-grandfather, her father, and the modern world is what makes Jeanne Anne such an incredible character–now one of my favorites in my reading history. Meyer’s ability to get into the mind of a strong minded woman questioning her place in society, both as a single girl and later a married mother, is uncanny. Yet, like all of the novel’s characters, he holds her accountable for her choices, leaving her vulnerable to tragedy.

A big read that begs to be both devoured and savored, The Son is an epic novel of a family’s history that will soon find itself on shelves alongside our treasured American classics.