GWAR, Me, and the Onrushing Grip of Death: Part 33

The show at the Revival Hall in Philadelphia was an eye-opening experience for us. It was one of the first times we played a big city as a headliner and actually got a good crowd. Everybody from snotty punk rockers to greasy metalheads wanted to see the band that everybody was talking about.

Hello there, everybody! Missed an episode, slept a lot. You’ll do that after four months of non-stop GWAR shows. So what do I do with my spare time? Go to New York and break things!

Well,we are back in effect and we are gonna go extra hard this year! Unless of course I lame out as I am known to do from time to time. But here’s this one, anyway! 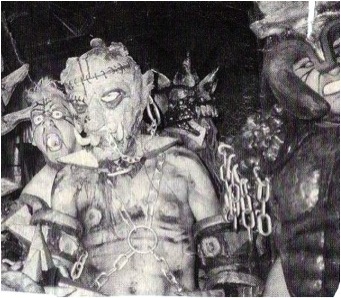 Techno Slave, Sexecutioner, Flattus Maximus, and Beefcake the Mighty, somewhere on tour, 1987 (thanks to Danny Black for the pic)

The show at the Revival Hall in Philadelphia was an eye-opening experience for us. It was one of the first times we played a big city as a headliner and actually got a good crowd. Everybody from snotty punk rockers to greasy metalheads wanted to see the band that everybody was talking about. Thanks to El Duce and The Alter-Natives word was spreading about the fucked-up band from Antarctica (by way of Richmond). And we were eager to expand upon our modest success. We had an album in the can, a Slave Pit to work and practice in, and a Golden Battle Barge parked outside that would take us anywhere a gig beckoned —  at 45 miles per hour, of course. But sometimes gigs led to situations that were embarrassing, dangerous, and painful.

We had made the trek all the way to Atlanta to play at the infamous Metroplex. El Duce had lived out behind the club in an old abandoned railway car and had convinced the club owner (whose missing girlfriend was featured on an episode of Unsolved Mysteries) to book us. It was one of our first headline shows and there was even some money involved. And even better, The Meatmen were playing the night before we were. We decided to go down there a day early and see if we could drum up some support for our show at theirs. Nobody really knew who the fuck we were and we drew more than a few dubious glares as our Battle Barge heaved into view, slewing into the parking lot with a shower of gravel. The plan was to throw on the costumes and run around the show a bit, but of course as soon as I saw the ugly crowd of semi-hostile skinheads I chickened out immediately, and instead embraced the indolent pleasure of swilling beer and chasing ass. I abandoned the plan, but somehow I still managed to talk Sleazy into throwing on the Techno suit, even though memories of the Chinese Dragon Disaster I had thrust upon him were far from old. He stumbled around the club for a while, drawing jeers. Nobody knew who the fuck he was and soon they began throwing trash. Sleazy could feel the situation disintegrating and tried to reverse fate with the desperate gamble of actually running up on stage during The Meatmen’s set, which he did just as “Crippled Children Suck” came to its thundering conclusion. The applause slowly faded as the audience stared on with a mixture of bewilderment, pity, and rage. Completely out of place and utterly unsupported (by me), Sleazy’s (as Techno) dramatic entrance had assumed the dynamic of a deer caught in the headlights of an oncoming truck. Tesco Vee took one look at the costumed clown, made an insulting remark, and proceeded into the next song, completely ignoring the chagrined cyborg, who shuffled off.

We didn’t learn from this episode, and indeed repeating our mistakes with mind-numbing regularity is a time-honored Slave Pit tradition. But when Sexy came up with the idea of walking around on the Virginia Beach Boardwalk to attract people to our show at the Peppermint Beach Club, for some reason I didn’t worm out. Instead I joined Sexy in a booze-fueled romp through downtown Virginia Beach, which was crawling with gangsters, rednecks, and drunken sailors. We didn’t have any Grammy nods or international tours back then; in fact we had no clout whatsoever…but we were about to get clouted. Approaching a group of menacing troll-people, Sexy began to mouth off about humanities insignificance, and was quickly punched in the face.

Exercising the better part of valor, and avoiding a flurry of blows, we ran for our lives, dodging a hail of beer bottles, rubber feet flapping all the way.

One of our early sick-outs was the classic “Oderus Gets Raped in the Ass by a Dead Dog”scene. After getting beaten on for a good part of the show, Techno would gain his revenge by savaging Oderus’butthole with the snout of a deceased canine — Pookie by name. I would paint latex on my ass and stick corn flakes in it It looked gross! Then Techno (played by Sleazy back then) would carefully stick the snout between the skin of my real ass and the gross rubber one. When he did the fake ass-rape action, the latex would bunch up around the dogs snout…and it looked really fucked up. We had done the scene a few times and it was becoming a standard. It was a real crowd pleaser! Then one night Techno was buggering Oderus with the dead dog, but not really…until he slipped, or something. Maybe it was his way of getting back at me for the Chinese Dragon disaster, or the Meatmen abandoning, or maybe it was me backing up suddenly, but at any rate the fiberglass snout of the filthy dead dog prop got rammed about two inches up my butt.

And on that note we bring this chapter to a close. We’ll see you in two weeks (yeah, right…) for the next…episode…of…

GWAR, Me, and the Onrushing Grip of Death!