Over a dozen local corporations have contributed money to help promote and manage the international cycling championship that the city will host. It was announced today that corporate partners with Richmond 2015, the non-profit corporation tasked with overseeing the city’s hosting of the 2015 UCI Road World Championships, have raised $11 million towards funding their operations ahead of the international cycling competition.

“It is great to see Richmond 2015 making so much progress so early in the preparation for the Road World Championships,” said Thomas Farrell III, chairman and CEO of Dominion, one of the 13 Founding Partners (see sidebar). “This collective support from the community1 clearly demonstrates the excitement and enthusiasm around this tremendous opportunity.”

The funding announced today at Lewis Ginter Botanical Gardens represents roughly half of the $21 million goal set by Richmond 2015.

Gov. Bob McDonnell believes the event will advertise the city to an international audience estimated at over 300 million viewers.

“Staging a world-class event with more than 1,000 elite athletes representing more than 70 nations will bring positive attention to the Commonwealth,” McDonnell said. “We are excited to showcase our region to the hundreds of thousands of on site spectators and the hundreds of millions watching on global television.”

Mayor Dwight Jones touted economic impact projections that would lead to $158 million throughout the state, largely from the estimated 450,000 on site spectators that will attend.

“The long-range impact will be even more significant by attracting talented new residents and growing businesses to our region,” Jones said.

Although unable to attend today’s announcement, Sen. Mark Warner, former governor of the Commonwealth, wrote a letter, read by Gov. McDonnell, expressing his excitement for the cycling competition.

“I know as a former resident of Richmond, I am looking forward to seeing the best cyclists in the world go through these familiar streets,” Warner said.

The Mayor said that current projections would net the city $86 million as a result of hosting the internationally-renowned event, one that, the Mayor said, is commensurate with cycling’s famed Tour d’France. The event itself was only an introduction to the mayor’s address. He spoke most about the long-lasting impression that the event will have on Richmond’s biking community “long beyond the races.”

Last week, the Mayor visited Copenhagen when the UCI, the governing body of the international event, announced that Richmond would host the 2015 event. The mayor said that 40% of Copenhagen residents ride their bikes to work. Although admitting that reproducing that percentile among Richmond’s population would take years, he nonetheless used the statistic as inspiration for Richmond’s ongoing bicycle initiatives. The mayor put forth the idea that that “bikes will be greeted more friendly in Richmond” as a result of the upcoming 2015 event. 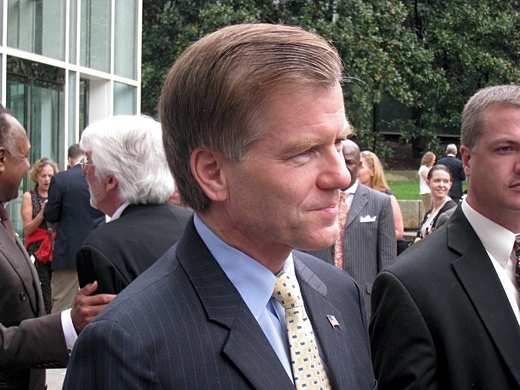 After the mayor spoke, Governor McDonnell addressed the crowd. He spoke more to the financial aspects of Richmond winning the 2015 bid. He said that, not only will the event do well in “promoting Virginia around the country and around the world,” but that increased sales tax revenues would be a boon for both the city of Richmond and the state at large.

Flanking Mayor Jones and Gov. McDonnell were CEO of Dominion, Tom Farrell, and Tim Miller, Executive Director of Richmond 2015, Inc., the non-profit corporation responsible for the organization, management, and promotion of the 2015 Championships. Miller indicated that staging the event will cost $19 million.

In press interviews, Gov. McDonnell stated that a total of approximately $8 million had already been raised to put on the event: $2 million coming from the city of Richmond, the state, businesses, and private donations, respectively. Gov. McDonnell said that Virginia can expect “two-to-three times” that amount, what he referred to as “good value and good return.”

When asked about the future plans that the city and Richmond 2015, Inc. have, Miller said that “building the organizational structure” is to be the most immediate (e.g. performing budget reviews, organizing committees, and analyzing contractors and vendors).

Public funding will also be a top priority. Miller said that when European cities host events such as the UCI Cycling Championship, most of the funds are paid by national and municipal investments. Miller said that the 2015 Richmond event will be largely funded by corporate sponsors, many of which will likely be national and international brands (i.e. Nike, Anheuser-Busch, etc.). Miller did say, however, that local Fortune 500 companies based in Richmond have expressed interest. Miller hopes that many will follow through in their interest to better make the event “Richmond’s own.”