The women of #rvadine

Seven female cooks and restaurateurs working in Richmond right now sat down at Pasture, sharing a spread of Sub Rosa’s finest and a pot of strong coffee, to talk about family, loyalty, and the future of women in the industry. In the year since The Southern Foodways Alliance debuted Sara Wood’s stirring oral histories “Women at Work in RVA,” as part of their series chronicling women throughout the food system in the South, women in the food and beverage industry have been the subject of increased attention on a national level. As though deploying some sort of bizarre reverse-psychology bomb, Howard Chua-Eoan’s November 2013 TIME article, “The 13 Gods of Food,” a circle-jerk on the forefathers of the current food movement, marginalized the contribution of females in the industry to little more than a sidebar. The article has served as a discussion point around which women and men across the country vehemently argue that women are, in fact, the backbone of the industry: strong, influential, and irreplaceable.

Cherry Bombe, a biannual magazine that focuses on women and food, recently held its Spring Jubilee, “a celebration of women in food.” The event boasted a jaw-dropping lineup of panelists including April Bloomfield, Christina Tosi, Anita Lo, Gabrielle Hamilton, and Ruth Reichl and addressed topics ranging from the media to motherhood, to a standing-room-only audience of 250 women (and maybe a dozen really smart men) that were the envy of the countless twitter followers who hung on their every hashtag. And culinary publications from Eater to The New York Times have sought to reexamine the perennial subject of women in the kitchen.

All that noise might not make much difference to the women who are cleaning out the walk-in, breaking down the fish, plunging toilets, and filling out schedules; but it signals something important nonetheless: now is a great time to be a woman in the restaurant industry. Such was the consensus among seven female cooks and restaurateurs working in Richmond right now. The group sat down at Pasture, sharing a spread of Sub Rosa’s finest and a pot of strong coffee, to talk about family, loyalty, and the future of women in the industry. 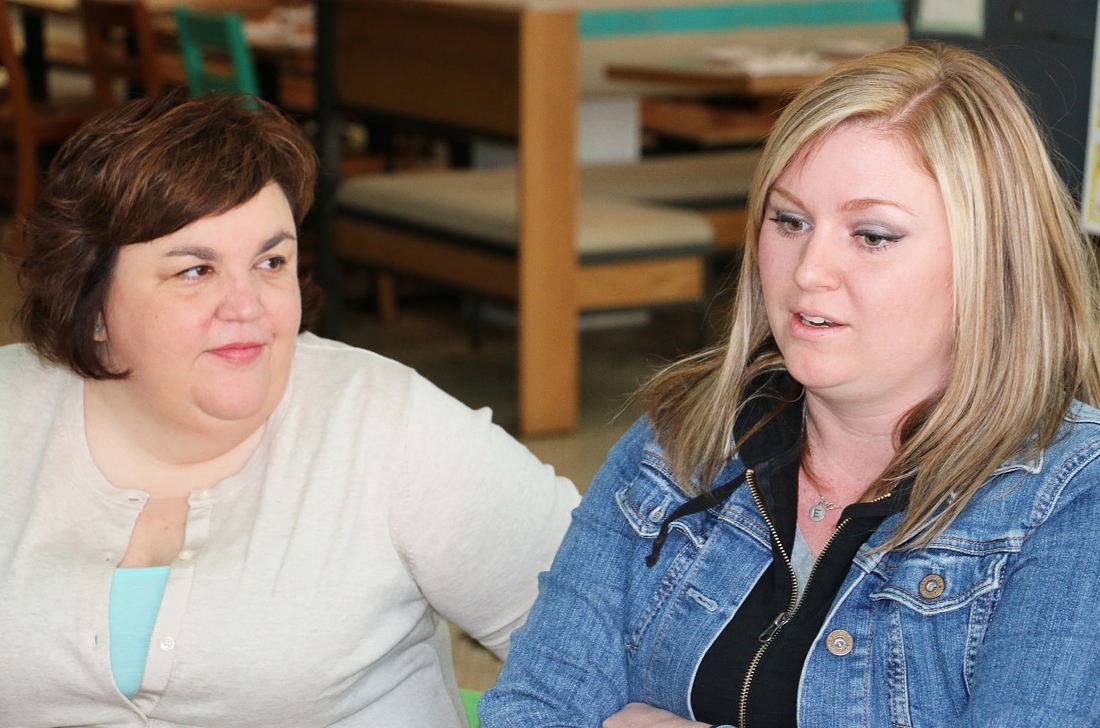 Michelle Jones grew up in the restaurant industry. “In Virginia Beach, you get your first job bussing tables when you’re about 11,” she says. Michelle owns and manages both Pasture locations with Jason Alley.”I always joke that my job is mostly camp counselor and, you know, big sister. I’m involved in the people’s lives because I care about them, and I want them to stick around.” That’s not hard to imagine when Michelle admits that Pasture is her life or that its staff are her family. She says her real family jokes (a bit grimly for my taste) that Michelle will die alone, but she, with characteristic cheer, smiles and says proudly, “But I won’t be alone. I know I’ll be with all sorts of people.”

Among them could easily be Beth Dixon. I’m sure the two, who consider each other family and speak to each other even more frequently, would be fine with that. They have an obvious mutual admiration, and it’s easy to see why. She describes herself as the “co-beverage director” at Pasture, to which Michelle adds laughing, “event planner, manager, photographer, social media head…We wear a lot of hats around here!” Beth identifies that kind of multitasking as a female characteristic and says that’s one of the things that “makes women so good in this business.” The single mother is also an intrepid homesteader, who canned, jammed, and pickled her way to creating RVA Swappers, a monthly group of likeminded food makers who get together to swap everything from homemade tonic syrup to olive tapenade.

Beth’s role at Pasture allows her to advance professionally while recognizing her needs as a mother. Michelle points out, “we knew you wanted to do more than just bartend, so we made it so that you could, ’cause you’re awesome at what you do.” For Beth, that consideration is invaluable: “I’ve worked places where, if you’re sick or something bad happens, they don’t care. They want a note from the doctor, a death certificate” There’s tsking and head-shaking among the other women. “Whereas, in this place, they’re like, ‘You’re sick. We don’t want you in this building. Go home, get some rest. And I’m a mom…that kinda thing really makes you feel more like a family when your boss is like, ‘your daughter’s sick, we’ll get you covered. Just go be a mom.””

For Jessica Bufford, owner of Estilo, Toast, and most recently, Dash, creating an atmosphere where the staff feels valued personally is essential: “The humanity of this business is so touching because you are so much more involved in these people’s lives than in a corporate setting. People aren’t just coming in and punching a clock. They’re representing everything you’ve worked for.” For her, it’s natural that women would excel at creating that type of environment. “If you don’t devote as much time as you possibly can to make sure those people feel like they’re well taken care of and they are a part of what’s going on, then it’s just not going to work. And I think that’s why women are so strong in this business because it is something that we do that most men just don’t, it’s that maternal instinct.” 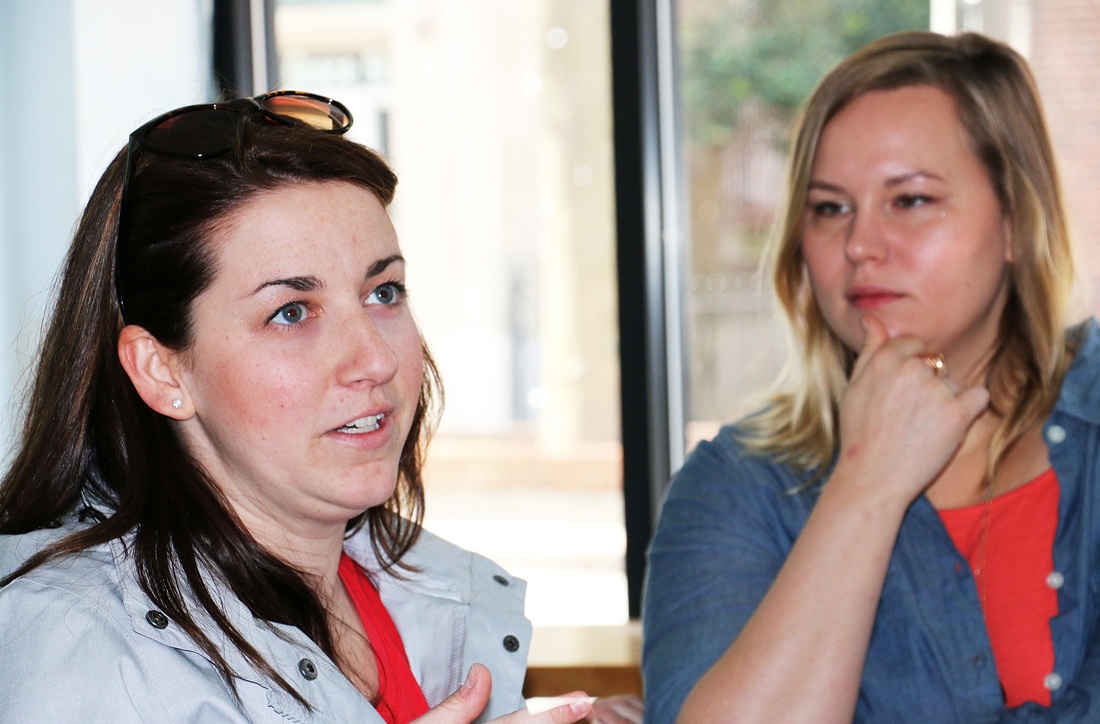 With Estilo’s Elby’s win in the ‘best new restaurant’ category, Jessica Bufford emerged from her self-proclaimed obscurity as a woman in the Richmond restaurant scene who makes things happen. The Bufford’s family of restaurants recently expanded to include Dash in the former Cous Cous location, which was the latest host of the Shindig potluck, benefitting The Leukemia and Lymphoma Society, a cause for which Jessica is a Woman of the Year nominee.

Jessica has orchestrated a ticketed charity dinner1 benefitting LLS, which will feature an all-female crew of chefs, servers, bartenders, and bussers: “We’re trying to, from the front of the house to the back of the house, have all women, so [Michelle Jones] agreed to wait tables, and Kendra [Feather] is waiting tables.” Teams of prep cooks and chefs will be grouped together by dish. “Katrina Giavos and Stella Dikos are going to do a dish…All of the female food writers have all offered to do something. They’ve actually all offered to be the buswomen…Karri [Peifer,] Brandon Fox, Deveron Timberlake, and Robey Martin want to be, like, the bussers.” She adds, laughing, “They’re like ‘We could clean up after y’all.'” Someone mumbles the requisite “We’ve been cleaning up for them for years,” and they all chuckle.

One chef contributing to the April LLS dinner is RVA native Brittanny Anderson, who sharpened her knives on the whetstones of NYC before moving back to Richmond with her husband, Roosevelt bartender Kjell Anderson. Brittanny says that the decision to move back to Richmond was influenced by the couple’s interest in starting a family, a reality that Brittanny attributes to the loss of some female chefs, but one she’s confident she and her husband can make work. She credits new moms and restaurateurs Emilia Sparatta and Kendra Feather as inspirations and also finds encouragement in Gabrielle Hamilton’s experience of cooking while nine months pregnant in the memoir Blood, Bones & Butter: The Inadvertent Education of a Reluctant Chef, a must-read for any woman in the restaurant industry. When Brittanny admits frankly that the idea still scares her, Velma “Mama J” Johnson, cuts through the murmurs of support with a sage motto: “Don’t be scared. Be consistent.” 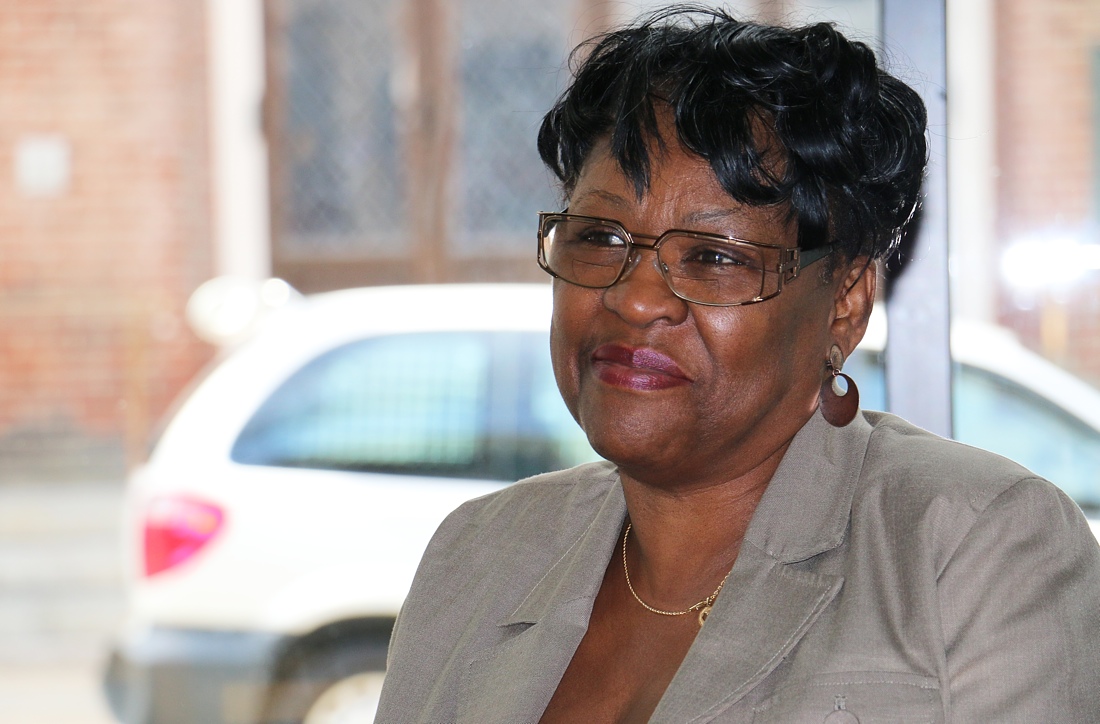 Mama J is such a warm, maternal influence that a moment in her company feels like a well-timed hug (and is usually followed by one). The former deputy sheriff of 17 years grew up cooking her mother and grandmother’s recipes among her 13 brothers and sisters. “My mama was always pregnant,” she remembers. Velma opened MamaJ’s with her son almost five years ago. She recalls, “The first year was hell, it really was. My son came to me and said, ‘Why [are] we doing this?’ And we shook our heads, we didn’t know.” They soon realized that they would need to hire people they could trust, people they could make a part of their family, people who would treat MamaJ’s as dearly as they did.

She tells a story about one employee who spent 31 years in prison for a robbery gone wrong, incarcerated at the age of 17. She says, “He’s the best employee you could ever have, so sweet and kind…You could trust him with your life, leave your pocketbook there, and he won’t touch it.” Velma nurtures the potential in her staff with an unmistakably motherly touch. For her, success isn’t about playing by someone else’s rules; it’s about doing what comes naturally to her. Once instructed on the proper way to cook yams by a charismatic culinary school graduate, she set the record straight, “That’s what you do. This is what I do. This is how I do it.”

Now in the process of opening Metzger Bar and Butchery with partner Brad Hemp, Brittanny Anderson wants to be an advocate for young females in the industry and hopes to create an environment in which they can thrive. She says, “we really need to be mentoring young women cooks…If we, as female cooks, can be kind and bring other girls into the fold, even from front of the house, I think there are women who might be really interested but are afraid of the ‘Boys’ Club.'” And that’s exactly what she wants to do at Metzger if she can find the right cooks for the job: “They’re out there, and I’m trying to find them.”

C’est le Vin’s Executive Chef Carly Herring has worked in Richmond restaurants for over a decade. She and Lilly Clem, Pasture’s newly appointed sous chef, agree that part of succeeding in the boys’ club is beating them at their own game. Carly says, “I started joking years ago that when you work with a bunch of guys in the kitchen, all you’ve gotta do is pull your dick out and put it on the table to see whose is bigger. I’ve found that the best way to get guys to respect you is to blatantly show them up…You play their game and just play it better.” Lilly nods and adds, “You have to be tough.”

Carly and Lilly both say they knew from a relatively early age that they wanted to be “lifers,” in the restaurant industry–to put in the time, work the line, and come up through the ranks, learning from every chef they could. Neither says much during the interview, instead quietly and intensely listening to the veterans, occasionally cracking a joke or a sly smile, suggesting a hint of what they must be like in the kitchen–keen and focused. They’re the type of chef that doesn’t broadcast their triumphs; they don’t have time for it.

Richmond has plenty of examples of women filling important roles in the food system, from food policy coordinator Anne Darby and GrowRVA’s Karen Atkinson, to farmers like Amy Hicks of Amy’s Garden and Autumn Campbell of Tomten Farm, as well as restaurateurs like Michelle Williams and Katrina Giavos, and increasingly as owners, executive chefs, and front of the house managers at Richmond’s most acclaimed restaurants. Its their humility that keeps women out of the spotlight, which leads to a lack of realistic female role models, making it hard to attract women and creating a weird self-fulfilling cycle. Brittanny, Carly, and Lilly, agree that supporting one another and recognizing each other’s triumphs is one easy way to help the media, especially on a national level, tune into what’s really happening in RVA and throughout the industry.