For the RVA News Mother’s Day Guide I set out to find letters between soldiers and their mothers. What I found was a mix of both profound words and minutia. Letters home often contained the minor details of camp life and questions about events, friends, and family back home. But hey also often contained reflections on the cause they were fighting for and the possibility of their own death.

For the RVANews Mother’s Day Guide, I was asked to reflect on the role of mothers during the Civil War. There’s no question that the war had a profound impact on women, and that certainly rang true for women in and around Richmond. However, I wanted to dive a little deeper and focus in particular on mothers who had sons fighting in the war, so I set out to find letters between soldiers and their mothers. What I found was a mix of both profound words and minutia. Letters home often contained the minor details of camp life and questions about events, friends, and family back home. But they also often contained reflections on the cause they were fighting for and the possibility of their own death.

Eli Pinson Landers was a 19-year-old Confederate private from Gwinnett County, GA. Landers was stationed in Richmond during the war and later fought in several Virginia battles. He wrote home often to his mother. His first several letters describe the excitement of going to war and life in camp. In this letter, he talks about going into Richmond to get an ambrotype picture taken:

I went up in town today and got my ambertype taken which I will send to you and I want you to keep this one for me and believe it to be the same boy that left you. This one cost 3 dollars but you won’t take $100 for it when you get it. Mama I want you to keep my picture as long as you live and show it to all the girls. Tell them that it is a Virginia Ranger. It is just like me now so you can guess how I look. “It” tells the girls and you all howda for me. It can’t talk with you but if I was there I could. Look on the cartridge box and you will find my name which was put there with a lead pencil…So keep this picture My Dear Mother for it is just like I am now…Give my love to all of the Gwinnett friends. I want to hear of you smiling when you get this. Remember that it is a son of yours who is in the noble cause of his country and who will willingly stay with it till death if needed. So let the Sweetwater girls see it. Tell Henry that it is Eel. So farewell dear friends. I know you are my friends. I return my sincere thanks to you for the presents. Farewell dear Mother.

The Civil War in Georgia

Later, after fighting in several engagements, the tone of his letters take a significant shift. This letter was written after the Battle of Chancellorsville:

Knowing that you will be uneasy till you here from me I will write to you for you will be sure to hear that I was killed in the fight last Sunday, for it was currently reported here that I was. But I write this with my own hand to testifying that I am yet in the Land of the Living and all honor and glory be to God for his care over me. We have had some awful times here for the last ten days. We have been in line of battle all the time marching through the woods, muds, and swamps and some part of the army was fighting all the time. We have lost a many a good solger during the time but the 3rd of May our Brigade got into it heels over head and our regiment lost more men than we ever have in arry fight yet. We had to fight them behind their entrenchments. There was some of our company killed fifteen steps of their trench. Our company is nearly ruined.

The Civil War in Georgia 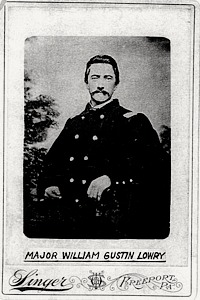 Also stationed in Virginia during the war, Second Lieutenant William Gustin (Gus) Lowry wrote regularly to his mother Rhoda Lowry back home in Pennsylvania. Lowry fought for the Union in the 62nd Regiment of the Pennsylvania Volunteers. His regiment saw action in all the major battles of the Army of the Potomac and he would later be killed in action in the Battle of Gettysburg. In this letter, he writes of their progress in the Peninsula campaign east of Richmond near Yorktown:

Dear Mother, when I last wrote to you on Sunday, we were under marching orders and expected to be off before this, but we have been held back as a reserve, but expect to go up the river today.

There has been a battle in front. Our troops came up with the retreating army. We heard the cannonading all of Monday. We don’t know any thing about the fight more than McClellan is victorious.  We don’t get the news here as soon as you do, only just what we see ourselves. We see by the paper that the people up north are down upon McClellan because he didn’t have 1000 or so of us killed at Yorktown, and drove the enemy out of their strong hold with the shovel & pick. Perhaps the brave people at home don’t know that a soldiers life is as sweet to him as theirs is to them. And that soldiers love a General that loves & tries not to lose them.

If I ever get home and / any person says any thing against Gen. / McClellan I’ll whip them if I can.

I am well. The company / are pretty well. If we move today I may not have a chance to write soon again. Love to all my friends. Send this to Mag. I am not writing to her today.

Lowry’s letter was more of a matter-of-fact update on the progress of his regiment. Others who wrote home to mom got a great deal more philosophical. In this letter, Leroy McAfee, a Confederate soldier from South Carolina, promises to live a better life if he makes it home to his mother:

I have been protected before by a higher power when danger was nigh and I have been thankful for it. Not as much as I should have been. I have at times been led astray and have wandered from the path of duty. I hope to be humbler, live a better life and love God more. I pray his protection in the hour of danger and his deliverance from disease death and the cursing influences of camp life. I pray to live to the good and be of service to my country. I pray to get back home to comfort my poor mother and make her happy. I pray to live the life of a Christian and after the war is over and my country free and my labors on earth completed I pray to die the death of all humble followers of Christ.

When I first set out to find these letters, I thought it would be easy to find some correspondence from mothers to their sons serving in the battlefields. I even enlisted the help of the Museum of the Confederacy who was only able to find one such letter in their collection. After giving it more thought, it made sense. It was often a logistical nightmare to get letters from home to troops out in the field. Add to that the difficulty of keeping a letter safe and dry throughout the war so that it still survived today, and it starts to make sense why we don’t see a lot of these letters today.

The letter they found was from a Richmond mother, Mary Jane Greer Baughman, to her son Charley who was defending the city of Petersburg during the last months of the war. It must have been frustrating for her son to be so close to home, but still in harm’s way. In her letter she expresses frustration about the delivery of the mail:

I hope you get some of my letters. I am sure you do not receive half that I write. From what you say, I know we don’t get all that you boys write, from the references you make in the letters we do get, to those we do not receive.

She then writes about conditions in his camp and discusses mailing him supplies and food from Richmond to Petersburg. I’m not even going to comment on the questionable nature of mailing ground beef, but hey, it’s 1864! See below:

Do you like your present quarters better than your old position in the trenches? I should judge from your letters you were not very much improved as to comforts and you are further from supplies. Could you not go to Petersburg every Saturday and meet a package which I would send by Express on Friday or is there any means and more convenient place?

She ends the letter on a more emotional note:

Christmas is just five weeks off. Oh how I do wish you could all be at home on that day, and no more war. No more army to go to anymore. In God’s own good time it will be brought to an end I know, I hope we shall be enabled to wait this time with faith and patience. That we shall be successful I have not a doubt, but I dread the prolonged trials and hardships of our men, but we may have cause to acknowledge that these many trials were blessings in disguise. I pray we may all so see and feel that all my dear children may be brought back in safety and in honour.

I was a bit taken aback while I read Baughman’s letter, because it read so similarly to something my own mother could have written to me. Even in the midst of war and probably facing incredible hardship in Richmond, she’s asking her son what food she can send to help him out. It’s that doting kind of love that can only come from a mother worried about her son’s wellbeing.

A huge thanks to the Museum of the Confederacy for finding such an amazing letter. Members of the MOC can make an appointment to view the actual letter itself and read the rest of its contents in the museum collection.

To all the mothers reading this, thanks for all that you do. Hope you enjoyed this little window into the letters between soldiers and their mothers.

If you’d like to see Mary Jane Greer Baughman’s letter, you can download the first page of it here. Careful though, it’s a pretty big file.