GWAR, Me, and the Onrushing Grip of Death: Part 32

Writing from Australia while preparing to take the stage for yet another show on GWAR’s most recent tour, Dave Brockie picks up where he left off a couple weeks ago, this time telling us about making his first record in 1987 New York. 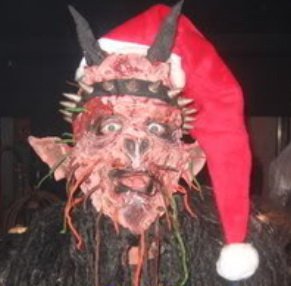 Season’s Beatings from GWAR! We are currently wrapping up what has been an absolutely circum-navigational year for the hardest working band in show-biz history with a run of shows in Australia, New Zealand, and finally the U.S. Then we will finally be done with our light tour schedule and be able to enjoy a well fagged-off break. But before we do (and I really am going to write about recording “Hell-O!” this time, like I said I was going to the last couple times) I have an important announcement for those of you who just don’t know what to get your Mom for X-mas. My first novel has finally become a physical reality…check out the press release for “Whargoul”, and then read Episode 32 of “GWAR, Me, and the On-Rushing Grip of Death”. Muzzles off! 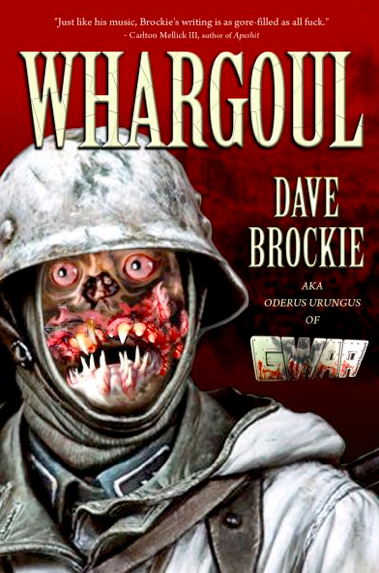 DAVE BROCKIE, A.K.A. ODERUS URUNGUS OF GWAR, PUTS OUT HIS FIRST NOVEL, THE WAR-HORROR EPIC “WHARGOUL”, AVAILABLE NOW AT AMAZON.COM

For many years Richmond, Virginia. artist/musician Dave Brockie has been known to the world as GWAR’s pig-snouted and bellicose lead “throat-thing”, Oderus Urungus, playing to semi-packed houses around easily 35% of the world. Never one to shy away from using GWAR’s success as a way to gain attention for a bewildering variety of side projects, including a glut of bands (X-Cops, Death Piggy, DBX), a variety of bizarre performances (F-Art Players, Chippy the Chippopautamus, The Crack-a-thon), and a slew of demented drawings and illustrations (see some here), Brockie has now added literature to his already bulging quiver of artistic arrows. Eleven years after its completion, Brockie’s sprawling epic of modern war and ancient necromancy, Whargoul, has finally been released in book form by Eraserhead Press.

I’d never been to New York until Thuglas, GWAR-Woman Three (number one being The Temptress, number two being Surfer Girl) and I went up there in the early spring of 1987 to meet with the Pot Jew and try to score some cheap publicity. Walking around with our asses hanging out had worked at the Easter Parade — why not in New York? We piled into Thuglas’s faithful red “crime van” and hit the road. I don’t remember much of that trip other than that I decided it would be more effective if I made the other two wear costumes while I walked around wearing a stupid wig and a Hawaiian shirt, pretending to be GWAR’s manager. I noticed immediately that we had far less impact on the denizens of the Big Apple than we did on the boob-esque bumpkins of Richmond, even with GW2’s hot ass bouncing around Times Square. But we received a warm and pot-drenched welcome from the Pot Jew at his studio, the semi-legendary Noise New York, located just south of Canal Street and right next to the heart of Chinatown. His studio was upstairs from some kind of hat factory and was stuffed with overflow from the place. He had an apartment on the same floor and assured us it would be totally cool for us the crash there, despite the fact that his wife seemed less-than-thrilled at the prospect, as her glares and occasional screams from unseen rooms were livid testimony to.

We returned to Richmond and after a few more weeks of frenzied songwriting we were ready, more or less. Again we loaded up Thuglas’s (great seeing you in Melbourne!) crime van with Hoseby, The Bishop, Spewy, and myself, threw in our battered gear, and set off for Noise, N.Y. Also in attendance was the Weed-wolf, who was the closest thing we had to a sound man/ producer (before the Pot Jew) and accordingly had horned his way into the venture. Plus he had a tape filled with weird noises (smashes, crashes, animals in pain…) which we were unsure of how to use on the album but wanted to try anyway. After all “samples” were just about as unknown as CD’s back then! The best thing about this tape was the breathy, oozing-with-raw-sex voice of his girlfriend, Tits Migilicutty, (who I had always lusted after, but that was really nothing, after all, at that stage of my over-sexed and under-fucked life if the sole criteria of a woman being hot was me lusting after her then this world would be FULL of hot women) saying the words that are the last thing you heard on the album — “it got so big”. If we had only known just how big it would get, and what we would have to do to get it that way, maybe we would have packed it in right there!

But in addition to his studio skills, obtrusive attitude, and large-titted girlfriend, The Weed-wolf had an additional bonus which often proved vital — he usually had pot!

I did my best to keep my patented Richmond “cooler-than-thou” vibe going on, but in reality I was completely blown away. Not even a lifetime of hype could get me ready for New York. Just the first sight off the Manhattan skyline, glimpsed from the northward-bound Jersey Turnpike, was like sighting the skeletal remains of some far-off, immense and glittering beast, whose towering rib cage was still draped with great swaths of decaying, corroded flesh, studded with a dizzying array of pore-like windows and doors, decaying water towers, garish billboards and the like, all bursting with pus and scabby with age. As we went through the Holland Tunnel it was like being ushered into the bowels of some monstrous, ancient necropolis, still swarming with the legions of parasites that tended to its eternal funerary rites. Reigning above all was the sinister outlines of the World Trade Center, its twin towers jutting into the diseased sky like massive tombstones over an open grave. The first time I ever saw it saw it, I knew it was going fall down. How different is the skyline of Gotham today, where once again the Empire State Building is king, and awaits the return of Kong.

We loaded in and got to work, and almost immediately began to notice things were not going to be quite as cool as we had hoped they would. “Crashing at his place” was actually crashing in the studio, an un-padded and spartan environment that afforded us little comfort. Pot Jew’s apartment was a no-go zone, at least for us…but he would disappear into it with maddening frequency, disappearing for hours as a steady stream of pot smoke came from under the door, which we desperately tried to inhale. You see, this was one of those times when Weed-wolf didn’t bring much pot with him! When Pot Jew would finally emerge, stoned, nervy, and shiftless, we would plunge back into work, at least until Pot Jew’s bitch wife piled into the control room, screaming at everyone, but mostly him. Soon Weed-wolf and Thuglas were fulfilling a surrogate producer role, and at night I would curl up under the console to the sound of PJ’s (Pot Jew, if you are an idiot) wife screaming him to sleep. Not an ideal studio situation, but I was still happy to be there.

That week I finally started hanging out with The Bishop. His wide-eyed high school veneer had quickly been replaced by the cynical and sarcastic, yet always humorous, bastard that we know and loathe and love today and would one day go on to quit the band while making everybody else as miserable as possible. But for now (then) it was great fun to walk around crumbling 1987 New York (pre-Disney, a complete shithole), drink cheap beer, and listen to him make fun of anybody else in the band that didn’t happen to be around. Always up for cruel fun, I jumped right aboard. Basically, anybody older was fair game, especially Thuglass and Hoseby, the truth of the jest being painfully unapparent to me. The Bishop was fresh from high school and I was already on his list. It’s weird, but at that point just about everybody in GWAR was older than me!

We sailed through the basic tracks, mostly because the considerably more experienced Thuglas, Hoseby and Spewy knew what they were doing and wanted to get the fuck out of there as soon as possible. They worked so fast that they recorded large sections of the album with the window wide open, and in fact you can hear street sounds and sirens on much of the record. We only had one week to get it all done so I shut about the alarmingly tinny sounds PJ was getting, and busied myself getting my lyrics together. I loved writing fucked-up shit and this was a great chance to show everybody I deserved my job, even if I had never wanted it and then gotten it simply because there was no better choice. Classics like “I’m in Love with a Dead Dog”, and “Jémme Apelles Jacques Cousteau” flew from my flair pen as I huddled at the two dollar burrito hut which had become my primary source of nutrition (we were forbidden from using the kitchen). When it was my turn to do my thing I knocked it out fairly quickly, mostly due to the fact that time was running out, the weed was completely gone, PJ was getting pissier, and everything was sounding like it had been recorded over the phone.

Finally we had finished the entire album and I decided to celebrate by blowing my last bit of money at the three dollar Chinese food store and listening to the rough mixes. Both experiences left me violently ill, and I proceeded to projectile vomit all over the bathroom and the hallway leading to it. Gripped by severe food poisoning, and wondering why GWAR didn’t sound more like Black Flag, I was all too willing to accept PJ’s explanation of it’s “just a rough mix”. I think even the Weed-wolf abandoned me at that point, and even if he didn’t, I am pretending he did.

I left New York the next day and met the guys in Philadelphia where we were playing for the first time. I was flushed with pride as I leapt on to the Golden-Battle Barge and jammed the rough mix tape into the boom box, around which everybody was gathered. How their delighted faces turned crestfallen and grey as we made our sonic journey into bad-sounding-ness. In short, they hated it, and my use of the “rough mix” excuse didn’t work as well as when Pot Jew had said it…

Crushed, I said fuck it and was about the business of getting set for the show, taking care of the guys, and collecting the money. So much was going through my head I almost passed out. I knew the record sounded a little thin but, fuck, we had been working with a hippy! I had no doubt we were going to get a good mix out of it and I had every confidence in our performances, art, and song-writing.

Fuck, I have to stop writing now I have to be onstage in 15 minutes!

Merry Christmas and a Happy New Year to all! See ya in 2011 with the next episode!