150 years ago today, Captain Henry W. Sawyer’s life hung in the balance as he awaited execution in Richmond’s Libby Prison. Captain Henry W. Sawyer of the 1st New Jersey Cavalry, one of the newest residents in Richmond’s Libby Prison, arrived there in June of 1863 taken prisoner in the Battle of Brandy Station. 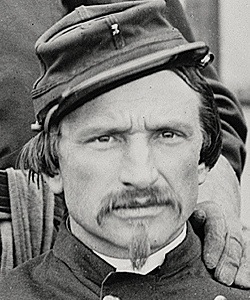 While Libby’s prisoners lived under the constant threat of sickness or violence, Sawyer found himself in a particularly bad situation. Hundreds of miles away, weeks before he was even imprisoned in the first place, Union Gen. Ambrose Burnside had authorized the execution of two Confederate spies in Kentucky. The men, William F. Corbin and T.J. McGraw, were caught recruiting Confederate sympathizers in the state and sentenced to death by firing squad. In retaliation for their execution, Confederate Gen. John Winder, commander of Libby Prison, ordered that two Union officers from the prison population be executed in turn.

The prisoners were assembled in a room, at 12 o’clock, by Capt. TURNER, the commandant of the prison, and after being formed in a hollow square around a table, were informed of the order of Gen. WINDER. Slips of paper, each containing the name of one of the officers present, was carefully folded up and deposited on the table. Capt. TURNER then informed the men that they might select whom they pleased to draw the names, and the first two names drawn would indicate those to be shot. New York Times, 7/11/1863

The first name drawn was Henry W. Sawyer. He and another soldier were sentenced to be shot in fourteen days. In his short time, Sawyer wrote multiple letters to family and friends. One such letter is reprinted below:

My Dear Friend: You must have heard of my solemn condition before this time, but notwithstanding, I will give you the particulars. I was severely wounded and taken prisoner on the 9th of June, near Brandy Station, Virginia, and arrived in Richmond on the 13th of June.

The Confederate Government claims that Burnside has executed two of their officers for recruiting in Kentucky, of which I know nothing, nor of the circumstances attending them.

On the 6th of July, all the Union Captains, now prisoners, drew lots for two to be executed in retaliation, and it fell on me for one. This is my present situation, and you can imagine my feelings upon so serious a matter.

I have been upon many hard-fought fields of battle, where death seemed to stare me in the face; but, sir, all that is nothing to compare with what I experience every hour. It is a great inconvenience to which prisoners of war are in all cases subjected, to have their letters inspected, but this is the rule in all countries. A third person, cold-blooded at best, if not what is worse, with an inelination to hold up to ridicule the expression of grief or affection, is permitted to have the review of a man’s heart toward a beloved wife and children, a dear old mother or friend. The correspondence loses its value, and forces me to keep within bounds of discreet caution.

I cannot in justice complain of those who have me in their charge. Gen. Winder, military commander at Richmond, has treated me with great consideration. Capt. Turner, commander of the prison, has treated me with courtesy and feeling; also, the rest of the officers with whom I have come in contact have all treated me with uniform kindness. And let me here say that, should the fortunes of war smile upon me in this my severest hour of trial, and compromise this matter between the two Governments, (for I have nothing whatever to do with it,) should I ever be in a position to return this act of kindness towards me, I should feel myself under obligations to do it.

I have strong hopes, and shall hope to the last, although it may be in vain; but I cannot think it just that I should suffer for the offences committed in a different department than the one in which I served, nor is there the least similarity between those two cases.

I received a letter from my dear wife. Truly, it is enough to kill her, and my two children, who are both old enough to realize my situation, and all the rest of our family. It is hard thus to part with all of them.

I have only the consolation that it is not through anything that I have done, or anything that I could evade doing, to bring this severe affliction upon my family. Again, I say, I have strong hopes yet that the bitter cup may pass from me; but it will always be a lesson in life should I get out of it. But you must not understand me that I am broken hearted with my trial. Nay, I am resigned to anything that God in his mercy may put upon me. I feel that I have done nothing wrong–nothing more than my duty toward my country, my God, and friends, in the hour of my country’s trial. I have stood by her to preserve her noble rank among nations, and to perpetuate her noble institutions to the inheritance of my children.

My dear friends, should I suffer death, look to my children. By law my family will be entitled to one-half of my actual pay, which will be thirty-six dollars per month. See to them, and let friend Magonagle know all about me, and the rest of my friends.

Will you send this letter, or its copy, to John T. Nixon and John F. Starr, to enlist them in my case, to procure for my wife and children their just value? Hoping you are all well, I remain yours, truly,

Fortunately for Sawyer, his wife acted quickly, rushing to Washington DC to meet with President Lincoln and imploring him to intervene and save her husband. As a result, the Union government upped the ante, threatening to execute two imprisoned Confederate officers if Sawyer and the other officer were harmed. One of those Confederate officers was none other than the son of Confederate Gen. Robert E. Lee. Not wishing to bring harm to the son of the Confederacy’s most important general, the Confederacy capitulated and no one was harmed on either side.

Sawyer was eventually exchanged for Lee’s son and released from Libby Prison. He rejoined the fighting and ultimately survived the war, settling in his home of Cape May, NJ where he opened a boarding house called Chalfonte which still operates today as an historic hotel.