On the evening of December 26, 1811, the Richmond Theatre was packed with visitors to see “The Father, or Family Feuds” by Denis Diderot and “Raymond and Agness, or The Bleeding Nun” by Matthew Gregory Lewis. A chandelier in the theatre started a fire that spread across stage.  Panicked audience members were pushed through tight doorways while others jumped out of the theatre winders. The fire caused the death of more than 70 audience members. Monumental Church was later built on the site of the theatre. The ashes of more than 70 victims of the 1811 fire are currently buried in a crypt beneath the floorboards. The Richmond Theatre fire was one of the worst disasters of the time. 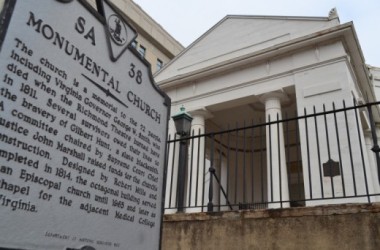 Henley Street Theatre Company and Richmond Shakespeare, in partnership with Historic Richmond and UR Downtown, invite you to a historical play reading of the two works at Monumental Church on January 20 at 7:00 PM.

Following the reading, a talkback will feature:

Food, wine, and beer will be provided by Historic Richmond.

Tickets are $15 each and my be purchased online.

FREE Parking is available in the parking lot of the  Virginia Department of Transportation (1401 East Broad Street) across from Monumental Church.