Two of Richmond’s donut darlings are baking up West End locations–one is confirmed, and the other is all but set in stone. Following on the heels of Duck Donuts’ announcement of its first Richmond location, at Willow Lawn, Country Style Donuts confirmed they are opening their second area location. The shop will be located inside Gold’s Gym Plaza at West Broad Street and West End Drive. From Richmond BizSense:

After 46 years in business, the elder of the Richmond doughnut world is sinking its teeth into a second store.

Nader Nassereddine, who will run the second location with brother-in-law Ramzi Rabah, said it will be a slightly modernized version of the East End institution.

“The donuts are going to be the same, nothing is going to change with that, but just the presentation will change some,” Nassereddine said. “The taste is the same, just a fresher look.”

The family-owned business will open the new store in the next three or four months, Nassereddine said. Country Style will add a new coffee and drink menu for the West End location and has touched up company logo.

The expansion is perhaps the biggest change for the doughnut shop’s brand since the Nassereddines bought the original Country Style at 4300 Williamsburg Road in 1984.

Sugar Shack Donuts, which recently opened a location downtown, is headed for Short Pump, according to recent tweets from the local shop’s account. But just where exactly? Owners won’t say.

But what they aren’t flat out saying actually says a lot. Sugar Shack tweeted the photo below, possibly hinting at a location inside the West Broad Village mixed use development (near Whole Foods Market and Trader Joe’s), last Friday.

No official word on the new location, which would be the company’s third, but the photo would place the storefront between the Which Which? sandwich shop and the ACAC fitness center on Old Brick Road. 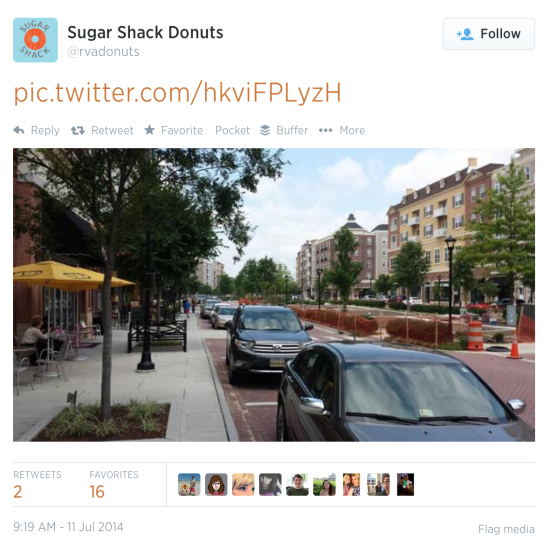