The group is protesting the construction of a sixteen-story condo in Historic Tobacco Row.

The 180° River View Advocates have been distributing flyers recently, decrying the construction of a new condominium complex, which they claim will destroy the 180 degree view of the James from Libby Hill Park.

You can find a .pdf of the flyer here. You can also find the organization’s petition here.

According to the flyer:

This proposed 16 story condo would tower in front of Libby Hill Park and be incompatible with Historic Tobacco Row…It’s everyone’s view – not just a few. Protect the Libby Hill Park historical view. 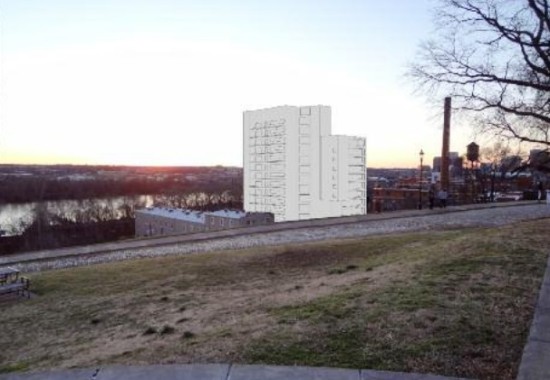 The flyer goes on to outline five reasons why the project is a bad idea. The 180° River View Advocates say that it sets the wrong precedent, it’s size is inappropriate, it negatively affects the overall view, the zoning was not intended for buildings of this height, and it ignores both the Downtown Master Plan and the Riverfront Plan.

On their website, the Advocates make it clear why they are so passionate about this issue:

…we need support in the form of signatures to petition the building of towers that would obstruct the view that allowed our city to exist/to be. The 180 degree view is something that we can still appreciate as much as our ancestors did. What you see, they saw. Without the view, the most intimate connection we have with our city will be severed, and that is why Richmond City Council in 1851 purchased Libby Hill Park for its citizens.

Last week, the Richmond Planning Commission approved the plan in a 6-2 vote. Tonight, the City Council voted to carry over the issue until the meeting on May 27.