This film practically sings, “Oh to be young again!” But then it mutters, “JK not for a million dollars.” You can approach this summer’s coming-of-age flick from a few angles:

The Way Way Back opens on a shot of 14-year-old Duncan, riding in the rear-facing seat of an old station wagon.1 Pale, spotty, with some baby fat still hanging around his face, Duncan endures a soul-eroding lecture from the front seat about all of his failings, delivered by his mother’s boyfriend, Trent. As Trent (Steve Carell) confidently explains why Duncan (Liam James) is merely a “3” on a 1-10 scale of attractiveness, our own memories of painful adolescence drop on us like a pile of cold fish. This could be the 1960s, 70s, 80s…any time at all, so relatable is it, that when Duncan puts on his iPod headphones to drown out the pubescent horrors of being judged by a dude who is doing it with your mom, it’s almost a shock that this film is obviously NOT taking place in 1994 or 1967 or whenever your own specific awkward stage took place. 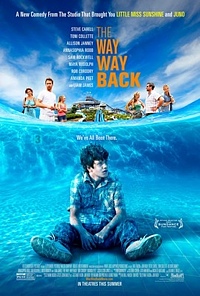 As the carload of drama reaches its destination, Trent’s beach house in Massachusetts, there’s a lingering feeling that time has been stopped somewhere in…the early 1980s, maybe? Who knows. The houses are that grey driftwood color, the water park is of the unflashy, chipped paint variety (we’ll get back to that later), and the muscular teens playing games on the beach are named Chad. The film itself will honor the throwback aspect, touching on familiar themes like “growing up” and “looking at girls’ bikini-clad butts,” as well as organizing itself into a predictable yet satisfying pattern.

It takes us a little while to realize that Trent sucks as much as Duncan believes he does. Duncan’s mom, Pam (an underused Toni Collette), pretty much lets everyone walk all over her. She doesn’t have control of her relationship, her son, or her summer vacation. Her character is so wishy-washy as to be unsettling, but she’s only a prop for Duncan and Trent to fight over. Much more interesting is their embarrassing, braying neighbor Betty (Allison Janney), who’s there for some comic relief. Her daughter Susanna, is a fringe member of the local Cool Girl Crew, and she and Duncan strike up an unlikely friendship (she’s hot and older and Duncan’s shuffling posture doesn’t exactly get him invited to be on a beach volleyball team with Goose, Maverick, and a bunch of Chads).

Duncan doesn’t know what to do with himself during the day. His mom and Trent keep running around in the dunes with their friends Kip (Rob Corddry) and Joan (Amanda Peet). Trent’s daughter Steph uses the house as a staging area for the beach, and everybody else just seems so sure of their place. He starts exploring on his own and discovers the Water Wizz water park, owned by an eccentric guy named Owen (Sam Rockwell, who is always awesome) and managed by his exasperated employee Caitlin (a WAY underused Maya Rudolph). Within the chain-link boundaries of this health inspector’s nightmare, awkwardness rules the day. Pudgy kids bound around, people spontaneously breakdance, and the rulers of it all are a group of entertaining misfits.2 After a couple days of loafing, Duncan is offered a bona fide job, and soon finds himself in a groove that gives him confidence. He’s bikini-butt-ogling with the best of them within a week.

The grey house set among gorgeous dunes and filled with people who own boats is a place of sadness—”Spring Break for adults,” as Susanna calls it, but a murky parade of hypocrisy and confusion for the teens. The bright blue, sunny water park, as a foil, is a an oasis of good, cleanish, kid-friendly fun, looked over by disheveled grown-ups with a heart of gold. When the two eventually overlap, things come to a head.

It’s all so twee! Yet charming and fun. I will probably not remember this movie until my son begins his own awkward shuffle and I find myself writing letters to Sam Rockwell, urging him to come show him the way to self-assurance. But even though it could be laid on top of any other movie and shown to be identical in many ways, The Way Way Back does satisfy just as those other films did. Adolescence is beatable, and parents are humans, too.

You want to be challenged or surprised in any way. The film’s faults are disappointing, but they’re no more grievous than the faults of every other film in the genre, and its great parts are nothing special. But the male performances are great, and there’s a cast of realism over the whole enterprise that is pretty impressive.

It could probably pass on a technicality. Pam and Betty exchange some reassuring lines here and there that may not technically be about men, but the tone is very much “I feel bad for you because of how a man is treating you,” so I’m not sure that counts. One interesting moment happens when Trent’s daughter, Steph, accuses Susanna of not being there for her lately. And it’s true, Steph’s own life is in a weird teen upheaval, and just because she’s pretty and has a douchebag boyfriend named Chad doesn’t mean she couldn’t use someone to talk to about it. But the movie doesn’t allow that to happen. How cool would it be if that little irony were on purpose! Nope, this story was written by dudes, about being a dude. The opposite situation—an awkward gal on a family trip attracts the attention of a hot older guy who helps her discover the mature young woman beneath several layers of frumpy cardigans—exists, too. It’s called Dirty Dancing, and it doesn’t pass either.