(The New) Carrie: It’s definitely kids that are the real monster

A faithful remake of a classic horror movie about what happens when you make fun of nerds and weirdos (hint: bad things). What’s worse than high school? Maybe literally nothing?1 That’s why it’s totally the perfect setting to tell terrifying stories about what would happen if the downcast and downtrodden were suddenly given incredible powers to fight back.2 Usually what happens is not awesome for innocent bystanders. 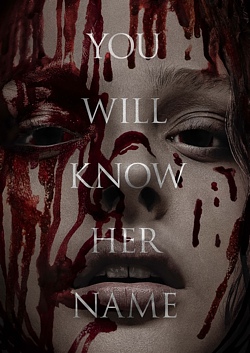 Carrie White (Chloë Grace Moretz) is one of the downtroddens. She’s unpopular at school because…she’s pale and was once homeschooled? Which is weird since she’s beautiful and pretty normal. Regardless, she sucks apparently, OK? After an awkward water polo session in gym class, Carrie heads to the showers3 and has her first period. Her incredibly religious and not terribly balanced mother, Margaret (Julianne Moore), failed to clue Carrie in to the fact that menstrual cycles are, you know, a thing that happens. So Carrie, understandably, thinks that she’s bleeding to death and begs the other girls in the locker room to help her. They all laugh at her while throwing maxi pads and tampons and chanting “Plug it up! Plug it up!” Kids, man! WTF! As Carrie starts to lose her shit, the lights explode and the various vaginal accoutrement fly around the room a bit. Because Carrie has telekinetic powers (just like Jean Grey)!

Miss Desjardin (Judy Greer), the gym teacher, punishes the ringleaders of the shower shaming by giving them the choice of running endless suicides or banishment from senior prom. GASP! NOT SENIOR PROM! Most of the girls begrudgingly go along with all the running, except for Chris (Portia Doubleday) who flies off the handle a bit and is banned from prom, vowing (bloody) revenge on Carrie. The very same Carrie who has discovered she suddenly has incredible powers to fight back, which, as we all know, never ends well (for innocent bystanders or batshit meangirls).

The Original Carrie (1976), which you can (currently) stream on Netflix Watch Instantly, is a horror movie classic featuring John Travolta(!), Sissy Spacek, and Piper Laurie–the latter two giving Oscar-nominated performances. Two Oscar-worthy performance in one horror movie!? Can you imagine such a thing today? Of course not, but it was the 70s, man, a different time when full frontal nudity was NBD and movies felt gritty and grown up. Original Carrie is all of these things (including a surprising amount of full frontal).

Now, since we’ve used up all the ideas, we’re busy remaking classic movies like Evil Dead II and Carrie. But times have changed, full frontal nudity is now a total big deal, and movies feel…infantilized. Director Danny Boyle calls it the “Pixarification of movies”. He talks about contemporary action films (and I’d throw horror films in there with them) which are violent, “…but it’s not violence that hurts. It’s kind of costless violence.” This film definitely has some “costless violence” in the endbits that feel weird, silly, and out of place. After watching New Carrie and Original Carrie back to back, lots of the newer iteration feels a bit silly and more like a teen movie than an adult horror movie.4

So New Carrie is no Original Carrie, but it’s not without merit! In fact, this is probably the best horror movie you’ll see in 2013. Julianne Moore, who looks shockingly like an older Sissy Spacek, turns in an awesomely (terribly?) believable performance as guilt-filled, overly-religious woman who’s missing a few of the critical brainparts. Moretz’s bloody climax is pretty great to watch and might, in some ways, even be superior to Spacek’s subtler mass murder in Original Carrie. But Moretz, unlike Sissy Spacek, is a handsome individual, which is pretty distracting. It’s easy to believe that weird-looking Spacek would be an outcast strictly based on her odd and slight appearance. With Moretz, not so much. The filmmakers even sexualize her a bit, which is weird because 1) she’s only 16 in real life and 2) that totally doesn’t fit the storyline at all. Compare and contrast the original movie poster to the new one: 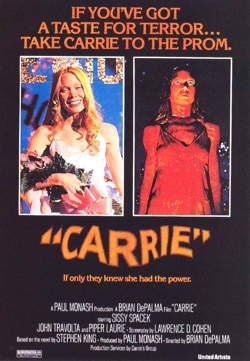 While it’s certainly not mind blowing in any way, this film faithfully reproduces the original keeping most of the lines we’ve all grown to love and repeat to our friends and family.5 “Plug it up! Plug it up!”, “crazy Carrie, crazy Carrie”, “dirty pillows”, and “they’re all going to laugh at you” all make welcomed appearances.

And hey! That’s kind of what this movie is: a (mostly) welcomed reappearance of a thing that you’ll probably want to share with your friends and family.6

You loved Original Carrie, were a downtrodden outcast in high school, or you’ve recently acquired the ability to move things…WITH YOUR MIND.

Julianne Moore and/or teenagers creep you the heck out.