GWAR, Me, and the On-rushing Grip of Death: Part 47

This episode we get a peek inside the domicile of El Duce, where Courtney Love used to live, and a chance encounter with two members from the classic all-female punk band, L7. It’s GWAR time, baby! 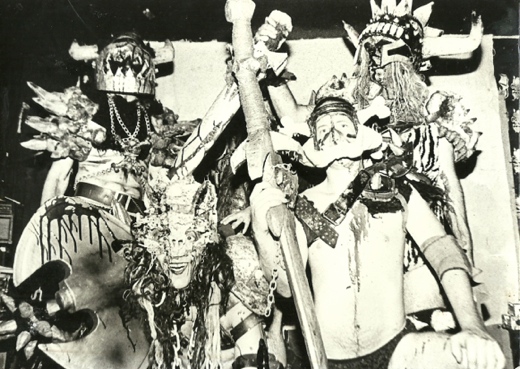 GWAR promo shot, 1988. At first I was unsure of why Beefcake (then portrayed by The Bishop) wasn’t in the picture, unless it was “his turn in the bucket” day. Or perhaps he was taking the picture. But with closer scrutiny, you can see that he is actually in the shot, just obscured by the rest of the band (obscuring Beefcake is no mean feat). See his baby-hand reaching out from the middle? The Bishop has tiny child-hands, which until recently were covered in Russian prison tattoos. Welcome, dear readers, to 2012! Which means it’s time to start another year of…

After a thoroughly forgettable show in El Paso (I think The Rhythm Pigs were there), we once again clambered into our up-until-that-point-faithful Battle-Barge and pointed it’s snout due west. We slowly made our way through the trackless desert which gave way to trackless mountains, which would occasionally be festooned with gigantic letters made out of random rocks denoting whatever college was stupid enough to have a campus in the middle of fucking nowhere. These mountains were the first serious obstacles the Battle-Barge had thus far encountered and soon the blessed beast was wheezing brake fluid and oil in a final near-cataclysm that left us stranded a mere hour from our goal, the city of angels, Hollywood and Dogtown…Los Angeles.

Spewy once again proved his worth as a mechanic and after several hours spent under the bus declared it fit to make the final push into the city where only the sea would finally stop us. After spending several hours stuck in a paralyzing traffic jam, the bloody towers of downtown suddenly loomed out of the smog only a few blocks away. We finally pulled behind the warehouse where El Duce had told us he was living, and after scouting around a bit, we discovered that “living behind it” would have been a more apt description, as El was at last sighted crawling out of a refrigerator box that served as his domicile. El was homeless at the time, but his box suited him well, besides the fact that he was woken every morning from his drunken stupor by the chattering sprinklers of a nearby bank. It was of no matter anyway, as El fully intended to cash in on the huge favor he had been doing us for the last year by telling everyone he met about how great we were. So great that El immediately moved into our bus for the majority of our LA stay.

The warehouse was right on Hollywood Blvd. and was occupied by a group of bohemians who played as a band called Celebrity Skin. That’s right, Courtney Love would later steal the name for an album title for her horrible band. It wasn’t surprising that she would, as at the time she was living at the warehouse (along w/ about 20 other people, including Germs/45 Graves drummer Don Bolles), and was one of the first people I met. Courtney, who for the purposes of this tale shall be known as Coochy (for reasons that will be told later), was in LA on a mission. She was going to “find a rock and roll star and take all his shit.” As proof of her success thus far produced a picture of her and Axl Rose all cuddled up together. Only later did I find out that it was actually a picture of her and a slightly larger-than-life size cardboard cut-out of Axl, whose band, Guns and Roses, I had never heard of. It fooled me!

El, also known with reverence amongst the locals as “Eldon” or slightly less-reverentially as “The Doosh”, had donned a Nazi helmet and led us into our first LA gig at Hollywood’s Candlahaus. It must be remembered that at this point GWAR was exclusively a product of the world of hardcore. It was from hardcore’s web of fax and phone numbers that I had used to get us to this point…a punk rock gig at a punk rock club at a time when the hardcore scene was arguably over, at least in the sense of it being a new thing. Hardcore had been around long enough at that point to re-define itself several times over, and the growing staleness of the offerings were at least a part of why we created GWAR. We looked like a ridiculous metal-band parody, and indeed we were, but we were still undeniably a part of the punk scene, and indeed the need for punks to ridicule the metal scene (which at the time was filled with nauseating bands like Poison) was a major part of our appeal to them.

We gave “The Doosh” a GWAR t-shirt (his first clean one in weeks) and blazed into our set for a crowd of a 100 or so stunned onlookers. Jaded old LA got a faceful that night as we blew the first of would turn out to be many thousands of subsequent loads (both on and offstage). I set the groundwork for a future one as I noticed a couple of tough-looking hotties in the front, covered in blood and grinning madly. These gals would turn out to be none other than a couple the L7 girls, Finch and Donita, who we befriended after the gig with amazing results. Finch invited the whole bloodstained horde over to her house. The Celebrity Skin palace was great, except for the fact that it didn’t have a toilet. Finch had a real house, the like of which many of us hadn’t seen in years, which she shared with her Dad, who apparently was never home. Showers, food, TV…we plunged into blissful recovery, even though I noticed with alarm that Spewy was already employing his main (and only) pre-make-out maneuver, the back rub. As we passed the bong around, Spewy and Finch disappeared into another room. I was smitten with the girl but had little choice but pass out. But the next morning she told me she had spent a restless night fending off Spewy’s relentless advances.

“Everytime I woke up, he would be sitting next to me, rubbing my hand!” she said.

Maybe there was hope!

IN TWO WEEKS: Fang and SF…the return to LA…and will I have sex with Finch from L7? All this and that in the next mind-blistering episode of this bunch of…episodes. In the next episode of–

“GWAR, Me, and the On-Rushing Grip of Death”
EPISODE 48
“Cannibalism and Corn-nuts”

There are 25 reader comments. Read them.