Ender’s Game: Boys will be boys EVEN IN SPACE

A gangly teen must save the human race in this adaption of Orson Scott Card’s classic novel. Orson Scott Card, author of the Ender’s Game series, hates same-sex marriage. Like, a lot. Here’s how he concluded a 2008 editorial on the subject:

How long before married people answer the dictators thus: Regardless of law, marriage has only one definition, and any government that attempts to change it is my mortal enemy. I will act to destroy that government and bring it down, so it can be replaced with a government that will respect and support marriage, and help me raise my children in a society where they will expect to marry in their turn.

So when an Ender’s Game film was announced many geeks, who had grown up reading and loving the Ender’s Games books, were ambivalent. Ender’s story, boyish wish fulfillment at its best, is certainly screen-worthy subject matter. But who wants to support a guy who, since publishing a lovable bit of our collective childhoods, has become an outspoken opponent of same-sex marriage? A few LGBT/nerd-related groups launched boycotts of the film.

Ultimately though, is it reasonable (or even practical) to boycott every piece of art or culture whose creator offends in someway? Think about Roman Polanski, director of Rosemary’s Baby, Chinatown, and The Pianist. Amazing films! Maybe not the best of dudes. Plus, this particular implementation of the Ender’s Game material involved the author very little. My advice: be aware of where Orson Scott Card’s coming from, because his worldview certainly colors his creative output, but judge the film on its own merits. You’ll most likely find plenty to complain about without touching on the author’s socio-political views. So, keeping that in mind… 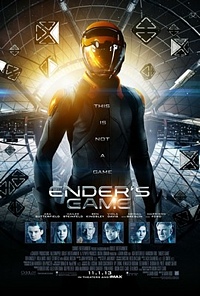 In 2086, the formics, an ant-like species of alien, invaded earth and killed millions of humans before a brave commander named Mazer Rackham defeated them by sacrificing himself. Fearing future attacks, humanity now prizes military genius over all else and scours the planet for the next Mazer Rackham. Once children are identified as having a bit of the military brillz, they’re sent off to Battle School to learn how to work as a team, float around in a space sphere (the “Battle Room”), and shoot non-leathal laser guns at each other.

Battle School is single-mindedly focused on the war games played in the Battle Room. Teams of teens face off in a three-dimensional version of capture the flag, with winners rising to the top of the ever-present leaderboard. Success in Battle School leads to Command School which leads to real leadership of a human fleet.

Ender (Asa Butterfield) is brilliant, maybe even more brilliant than Mazer Rackham himself. His brother and sister, Peter and Valentine, are also brilliant but washed out of Battle School because they were too angry / compassionate (respectively). Ender, unfortunately (or fortunately) is both too angry and too compassionate. He’s also a tiny, gangly guy, which, when paired with his teacher-acknowledged brilliance, doesn’t win him any friends. But maybe, just maybe, he and a band of loyal misfits can overcome the odds and rise to the top of the Battle Room leaderboard using clever strategy to outmatch brute strength? And then maybe, just maybe, they can save the human race? Maybe (yes)!

Full disclosure: I’ve read Ender’s Game and the subsequent three books. While I wouldn’t call myself a fanboy, I’d definitely say I’m a regular-type fan. It’s been awhile, but in my mind the original story is filled full with action and emotions as Ender battles his enemies, the formics, and himself. It’s a non-stop, page-turning, can’t-put-it-down type of affair.

However, this film adaptation of Ender’s Game is more like flipping through through an Ender’s Game scrapbook than experiencing a real story. There’s a bit here about winning in the Battle Room, a bit there about Ender facing down bullies, and over there a snippet about his complicated relationship with his siblings. All of these, unfortunately, feel more like homages to the original text than anything fully realized.

Most of the characters are flatly symbolic: Peter is violent; Valentine is caring; Colonel Graff (Harrison Ford) is authoritative; and Ender, stuck in the middle, tries desperately to piece together each of these aspects into a single person. Except nothing Ender does feels particularly desperate. Nothing Peter does is exceedingly cruel, Valentine dishes out the hugs but not much else, and so on down the line. It’s almost like Pirates of the Caribbean in reverse. Instead of a vibrant movie springing forth from a thin, metallic theme park ride, we have a husk of a movie shaken out from what truly is a pretty great story.

After leaving the theatre I thought, “Well! That was pretty good!” But I think what I really meant was “I liked that this movie made me think about a book I really enjoyed reading a while ago!”

You’ve read a bunch of the books are excited about the prospect of your beloved characters on the big screen.

You’ve read a bunch of the books are terrified of the prospect of your beloved characters on the big screen.

Nope! None of the four female characters (one of which is a computer-generated insectoid alien queen) talk about anything other than Ender, and they’re usually speaking to Ender about Ender. Viola Davis, whom I’ve loved ever since Doubt, plays a pushovery military psychologist, which is a disappointment. But it’s not all bad, Petra Arkanian (Hailee Steinfeld) gets some Katniss Everdeen-like love as the group’s sharpshooter.