Since coming to the U.S. in 1996, UR alumna and employee (and single mother) Joanita Senoga has worked hard to support her family… and 250 children in her native Uganda. As founder of the Circle of Peace School, Senoga has created a center of learning for children who would otherwise not receive an education.

Facing poverty and disease, many children in Kampala, Uganda struggle to receive basic care, including food, clothing, housing, and medical attention. A quality education is even more difficult to come by.

But in 1994, following a national movement to provide kids in Uganda with early childhood education, a nursery and primary school opened its doors to the region’s children whose families could not afford school tuition and to orphans whose parents had passed away from AIDS or other diseases.

Joanita Senoga, 40, is the founder of the Circle of Peace School in Kampala — once a nursery school for eight students who met on her family’s front porch and now a family-run, urban school that enrolls 250 students each year in its nursery to seventh grade classes.

“Without the school, these children will have no one to care for them,” Senoga said.

The single mother of two was born in Kampala in 1970. As a child, Senoga lived on a farm with her grandparents.

“Growing up on a farm taught me a lot of discipline as I milked cows and picked crops,” Senoga said. “I also knew that I was loved by my parents and my grandparents.”

In addition to a foundation of discipline, Senoga said she also learned the value of an education.

“My parents never gave me any presents for Christmas; however, what they said they gave me was an education,” Senoga said. “Because of this, I grew up valuing education, and because of my parents’ hard work to provide me with an education, I am who I am.”

Senoga earned her teaching degree from the Kibuli Teacher’s College in Uganda and immediately began work as a public school teacher.

“As a teacher at Buganda Primary School, I had seen children denied an education due to their family’s inability to pay school fees,” Senoga said. “I recognized the need to help these children learn to read, write, count, and realize their ability to discover. The experience showed me how neglected and illiterate some children were.”

Senoga worked in the public school system until 1994 when she switched her focus to setting up the Circle of Peace School.

“I was troubled by the fact that some students were being denied an education because their families were too poor to pay school fees,” Senoga said. “Some of these children lived in my neighborhood and attended my church. As a Sunday school teacher, I found myself teaching basic reading to my pupils. Soon enough, I began the school on my parent’s front porch.”

Senoga said whenever the children came to the school, “the kids smiled so much because they were so happy to be able to learn.” She said some of the children came from broken homes and domestic violence, and to most students, the school is a sanctuary.

Soon after the school’s opening, parents were asking her to expand the school and enroll their children.

Senoga headed up the school for two years, but had to flee her home country in 1996 after a man tried to force her into marriage. She had to leave her two children in Uganda.

After coming to the United States, Senoga worked at a church in Richmond and also cleaned apartments. She was eventually reunited with her children in 2001.

However, it wasn’t until she met Richard Leatherman, a former University of Richmond (UR) professor and current senior leadership consultant for International Leadership Consultants, Inc., that Senoga considered attending UR and teaching in the States.

According to Leatherman, he met Senoga when she had been cleaning office spaces and private homes. When he needed cleaning services in his home, a friend recommended her.

“I interviewed her and discovered she had been a teacher in Uganda,” Leatherman said. “I asked, ‘Why in the heck are you cleaning homes and offices? Why aren’t you teaching?’ She replied that she didn’t have the necessary credentials to teach here in the States.”

Leatherman said upon hearing this, he suggested that she return to school to obtain her degree so she could teach. Senoga was hesitant, saying that she could not continue school because she had to work. But Leatherman remained persistent. He suggested she take a night course at the UR School of Continuing Studies.

According to Leatherman, while taking classes, Senoga obtained a part-time job at UR’s library. She simultaneously held down other part-time jobs and after graduating with a Bachelor of Arts in Education from UR in 2006, she was offered a full-time job at the library.

“(Senoga) has always worked many simultaneous jobs to earn enough to bring her children to America, saved to buy a home here in the West End, and at the same time, send money every month for the past ten years back to Uganda to support the Peace School,” Leatherman said. “I see her as dedicated to her family, job, religion, and especially the Circle of Peace School in Uganda. She is an honest, caring, and one hard working lady.”

Now in pursuit of a masters degree in Library Science, Senoga continues to work at the library and at another job to support the Circle of Peace school. She said the students there still have to endure temporary classrooms and poor teaching materials, problems they have faced since the school first opened.

“Currently, we are trying to expand the school so that we can accept more students and provide basic essentials that will accelerate their learning,” Senoga said. “Therefore, we now encounter adversity in trying to raise funds for the development of the school, the purchase of new land, and the shipping materials and supplies to Uganda (because school supplies and basic necessities are considerably cheaper in the U.S.).” 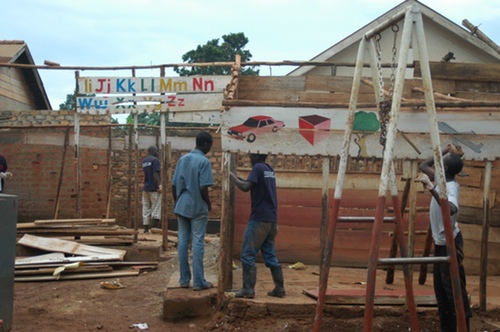 According to Senoga, the Circle of Peace School, which goes by the Ugandan Ministry of Education’s curriculum for teaching standards and contents, attempts to raise most of the money for its students’ school fees through donations.

Out of the 250 students the year-round school, 30 are orphans who board at the school. Other students have the option to only attend during the day. Senoga said there are currently 12 teachers working at the school. 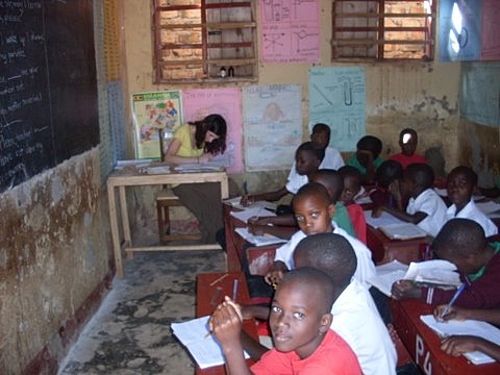 Not only is the school there for its students, Senoga says the school is a community-driven organization.

“Education assists the community by getting people involved in trying to help the school continue and be sustainable because it will benefit their children and give them an opportunity for a better life,” Senoga said. “Unlike in the U.S., education is not free, and children walk long distances to school. Also, jobs are not available; therefore, financially, there is no money. Life is also harsh in Uganda because it’s a third world country without modern conveniences such electricity, running water, etc.”

Senoga says she is currently seeking ways to educate people about the school. She has initiated small fundraisers such as car washes and yard sales and established partnerships with other organizations such as Ahead Energy, Givology Spiders, Harvie Elementary School, Collegiate School, and more.

“In the past, there were no sources available except what I could afford to send of my own money. However, now the school is funded by the efforts of others, organizations … and myself,” Senoga said.

Givology Spiders, a student-run organization at UR that seeks to support schools in the developing world and spread the word about the importance of education, is holding an information session on about the Circle of Peace School this Friday, June 18 from 6pm to 8pm in the Alice Haynes Room of the Tyler Haynes Commons on the UR campus. Former students will discuss their experiences at the school, and East African students will speak about the challenges of obtaining an education in their native countries.

David Davenport, a sophomore at UR and president of Givology Spiders, said he met Senoga when he started working at the university’s library and she now serves as the group’s sponsor.

“Joanita is an amazing woman who has an unbounded passion for supporting the children at the Circle of Peace and providing them with an education that gives them an opportunity to succeed in the modern world,” Davenport said. “In the short time I have known Joanita since I came to the University of Richmond, she has opened my eyes to the importance of education and to the necessity of educating these children in Uganda.”

According to Davenport, because of the group’s strong ties to the Circle of Peace School, all of their fundraising efforts have been directed towards helping the school grow. The Friday event is the most recent effort to help benefit the school.

“This event is very important because it will allow us to spread awareness about the lack of educational opportunity in Uganda,” Senoga said. “Also, it will give us the chance to inform people about the Circle of Peace School and how we’re trying to help the school continue its mission and develop better opportunities for its future.”

The event, which is sponsored by Friends of Circle of Peace School, Givology Spiders, and the U.S. Task Force, will demonstrate the importance of education, according to Senoga.

“Americans have the opportunity and access to free education to obtain a better life. For the orphans in Uganda, education is there only means to a better life; however, their education is not free,” Senoga said. “Because these children either come from impoverished families or have been impoverished by the loss of their parents, it is impossible for them to afford Ugandan school fees. The Circle of Peace School provides free educations to students from pre-K through seventh grade, and we are asking for assistance in recognizing this is a cause worth supporting, a cause that makes a difference in a child’s life for the better.”

For more information about Joanita Senoga and the Circle of Peace School, visit the school’s website or contact her at jsenoga@richmond.edu.