Hooten goes home (with No BS!)

Bryan Hooten is going home, and he’s bringing one of his most popular bands with him.

Bryan Hooten is going home, and he’s bringing one of his most popular bands with him. Not Ombak, or Fight the Big Bull, or even Verbatim. But it’s No BS! Brass who’s currently on their mini-tour of some southern states, and tomorrow they’re hitting Birmingham, Alabama, while they’re at it.

It’ll be the first time for any of his many bands to play in his home town, and he’s pretty excited. 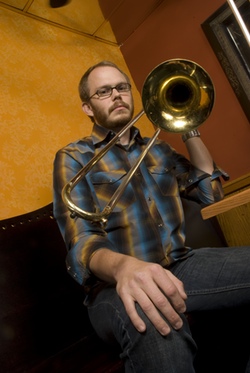 No BS! is going back on the road. What’s going to be different about this tour from the last one (besides the band’s new bus)?

BH: We’ve got more club gigs this time as opposed to focusing mostly on busking, though we’re planning to hit the streets in Athens, GA. We’ve also got a ton of new material since our last tour, almost all of which will be going on our new album.

What does it mean to you to play in your hometown for the first time with a Richmond-based group?

BH: I’m very excited to bring the Richmond sound to Birmingham. I grew up around my dad’s pep band at Birmingham Southern College and spent lots of time in the marching, concert and jazz bands at Vestavia Hills High School so it will be fun to be there again surrounded by brass instruments, family and friends. My mom, dad, brother and sister all live there and they’ve been really helpful in terms of building the buzz. I still have lots of friends there too and they have been spreading the word. The opening band is led by an old trombone-playing friend of mine, Chad Fisher. We crossed paths a lot while I was in high-school so it will be fun to share the stage with him again. It’s going to be a party!

Where else is the band stopping to play besides Birmingham?

BH: Greensboro and Asheville in North Carolina and Athens, Georgia are the planned locations but I’m sure there will be some spontaneous hits along the way.

Any busking planned? Do you plan to busk or does it just happen?

BH: We are definitely planning to busk in Athens but most of it just happens. I think most musicians are naturally restless people. The combination of our restlessness with our quick set-up time will have us playing more rather than less.

One would think New Orleans would be a must-hit spot for a brass band on tour in the south. Any reasons beyond logistical obstacles for not bringing your own style of brass band music to the Crescent City?

BH: One would indeed think that. Our reasons for not getting down there this time are purely logistical. The tightness of our tour-window combined with the distance from here to there was just a little too difficult to work out. We have plans to make it down there at some point, for sure.

Talk a little about being on a bus with those guys for extended periods of time. Will mayhem ensue?

BH: Mayhem is guaranteed. Any time you put 11 guys (Lucas [Fritz] is coming along) in a small space it’s bound to be a little crazy. We have a way of making up hilarious songs and raps, especially late night, post-gig. I think everyone will be much more comfortable in this bus as opposed to the traditional 15 passenger van and that might mellow us out a little, but I doubt it. Lance (and the rest of us, but mostly Lance) has been doing a lot of work on that thing to ensure that we’ll be cruising in style.

Visit No BS! Brass online, and read their updates from the road on their various Twitter accounts: @nobsbrass, @bryanhooten, @jdillardwatt, @dhood49

If you’re in Birmingham, No BS! Brass and Chad Fisher Group play Bottletree (3719 3rd Avenue South in Birmingham, AL) on Tuesday, May 25, at 9pm. More info.