Two hundred three North Lombardy has been transformed. Most know this address to be the old location for Bogart’s, the legendary restaurant, drinking hole, and jazz club that recently moved to W. Cary St. But after much work and many months, the new leaseholders have christened the restaurant in its place Balliceaux (pronounced “bali-so”).

words and photos by Dean Christesen

Two hundred three North Lombardy has been transformed. Most know this address to be the old location for Bogart’s, the legendary restaurant, drinking hole, and jazz club that recently moved to W. Cary St. But after much work and many months, the new leaseholders have christened the restaurant in its place Balliceaux (pronounced “bali-so”).

The transformation is remarkable. Nostalgia might kick in for a second after walking in the front door, but after that, the spectacle of the redesign takes over your conscious thinking. New owners Steve and Lainie Gratz made the most of the building’s layout by gutting the interior, rebuilding, and designing with a “bohemian modern” atmosphere in mind.

Everyone’s likely first question is predictable: “What did they do to the back room?” If you’re expecting a dark, smoky hideaway, then don’t get your hopes up. Whereas the old room was mysterious and, ok, charming, the new room is gorgeous. Windows and skylights line the walls and ceiling. Stone slabs and wood paneling combine for a slick, almost neo-70s look.

Don’t expect a door to close behind you, either. The back room is not so much of a room any longer. The feeling of the area is one of openness and being connected to the remainder of the restaurant, but with live music, the back area is sure to have a sense of purpose that will distinguish it from the front section.

Steve Gratz says they hope to have the restaurant open by August 14, but a lot will depend on ABC licensing.

In 2007, the Gratz’s purchased the building and waited a year for Bogart’s lease–signed by then-owner Jim Bacas–to run out. Meanwhile, they renovated the apartments above the restaurant.

“That had to be done because they were in pretty rough shape,” Steve Gratz said. “I’m glad that we have all new plumbing upstairs now.”

In April 30, Bacas’s lease expired, and the new team moved in.

“We got in here just about a year ago in the beginning of July,” Gratz said. “We worked pretty solidly for a full year. Demolition took like a month and a half. This whole [back] area needed a lot of structural engineering.”

As he maintained last year, music will have a great presence in the restaurant, and he has enlisted Chris Bopst to the team to book for the space.

“Chris is a lot more involved with what’s going on locally with music,” Gratz said, “so we’re using people that have a good handle on the music scene.”

Bopst’s approach to booking at Balliceaux will be making every show matter, and not booking a group if everyone on the team isn’t enthusiastic about it.

The last couple of years of Bogart’s on Lombardy, he said, were hurt by having too much music.

“I’m always a bigger fan of less than more… I love what Cous Cous does with their stuff, how it’s not all the time. They do it well. Most shows are well attended, and people appreciate it.”

Restaurants tread in dangerous territory when they rely on music to draw in business. This, he says, is what happened to Hole in the Wall, an old venue on Laurel Street.

“It got to the point where the only time they would have a crowd is when they had a show. And it’s really not that type of place. It’s not like…the National or whatever incarnation of Twisters it was. Places like Cous Cous or Ipanema: when they have these types of things, it’s fun. And you can go in there, too, when nothing’s happening and still be able to have a great time.”

“I think,” he continues, “in order for a place to succeed it has to be first and foremost: this is where I go to eat.”

As Bogart’s was not booking only jazz when it closed, neither will Bopst at Balliceaux. He subscribes to the philosophy of there being only two types of music: “good and bad.” What does this mean for music at Balliceaux? Hopefully loads of good music, if they fit the environment.

“I don’t think there will be any loud rock music. Even though the room could handle it, it’s not the place for it. Motor Head wouldn’t be right in here.”

While Bopst believes jazz clubs don’t survive because they don’t have “a residence with the culture at large,” he does have good things to say about jazz musicians today and living in the age of pluralism:

“With the way the media is, your access to different types of music is unlimited. And that infuses the players today. They’re much more hands-on than players I’ve known in the city throughout the years. They put out their own stuff, they hustle, they promote their shows. There’s much more of an effort to get out there. And there’s a lot of good jazz now in the city, which was not the case for a long time.”

The Balliceaux team wants to treat its bands well. Having played the musician role quite actively, Bopst feels very strongly that if musicians bring an audience, they should be paid accordingly.

He describes his personal taste of music, which could perhaps be deciphered as a hint to musicians looking to book the venue: “I don’t ever want to listen to music to mellow out. I like stuff with some ass, some bite, some chomps, something that moves me physically… I think music has always got to hit your body.”

Bopst shares his excitement for Balliceaux’s opening with his co-workers, some of whom he has known for many years. He worked at Millie’s with executive chef Russell Cook and his sous chef John Elliot, and has known Holly Wrenn, who will run the front of house. The Gratz’s are Bopst’s newest acquaintances, having just met them within the last six months.

“Lainie and Steve have done everything right,” Bopst said. “I liked the people they hired so I wanted to help out.”

Everyone on staff knows the history of the building, and Steve Gratz says he hopes to honor it with a “terrific late night, ambient atmosphere for an intimate music scene.”

“It’s a great location, it’s a great building, it’s got a great legacy,” he said, “and we wanted to do something really special with the space.”

Steve Gratz and Chris Bopst in the former Back Room 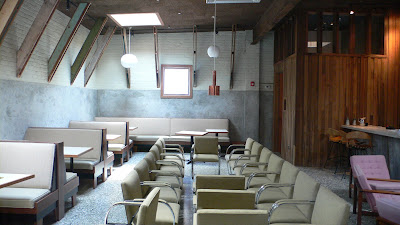 Looking south in the back room. Bands will now play along the north wall of this room. 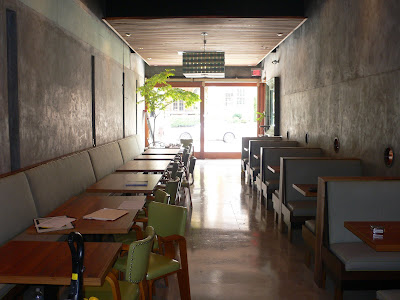 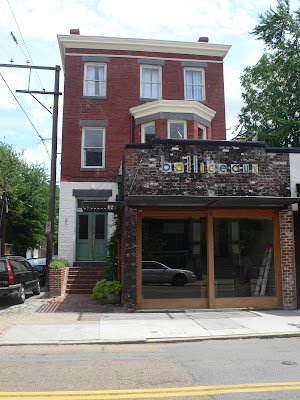