VCU expansion: Past, present, and future

VCU has exploded over the last 15 years. Here’s a rundown of the main additions and what we can expect in the next 15 years. VCU has invested $1.7 billion in its infrastructure since 1997, money that’s produced: nearly 4,000 new beds for student residences; 12,500 parking spots; and 3 million square feet of new […] 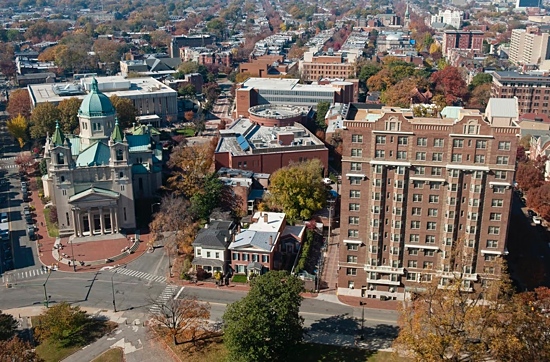 VCU has exploded over the last 15 years. Here’s a rundown of the main additions and what we can expect in the next 15 years.

“The driving force behind all of this was the increase in enrollment in Virginia,” said Brian Ohlinger, Associate Vice President for Facilities Management. He said that in 1997, VCU enrolled roughly 21,000 students. By 2008, that number ballooned to over 32,000.

“I think what’s dramatically changed in these years of growth is where the students come from,” Ohlinger said. Of those 32,000 students, roughly 900 are from the Richmond region. “All of our growth came from students outside of Richmond, particularly Northern [Virginia], which is our number one source of students now.”1

“With that growth you had to provide campus housing,” Ohlinger said, as well as the buildings and amenities to help make VCU a top tier institution as per its Quest for Distinction.

Much of VCU’s expansion has been (and will be) predicated on the recently revised2020 Master Plan (PDF). Here are several key projects that have swelled the university and an idea of what VCU may look like in the future.

The cornerstone of VCU’s development at the Monroe Park campus along W. Broad Street has a not so subtle hint of HAVOC!

“The Siegel Center, which came online in 2000–that was a game changer,” Ohlinger said. “That has allowed us to keep our basketball on campus.

But it’s done more than centralize basketball on the campus. “It has certainly contributed to a collegiate atmosphere at a basketball game,” he said. “I mean, that’s a tough place–if you’re a visiting team–to come into and play.” 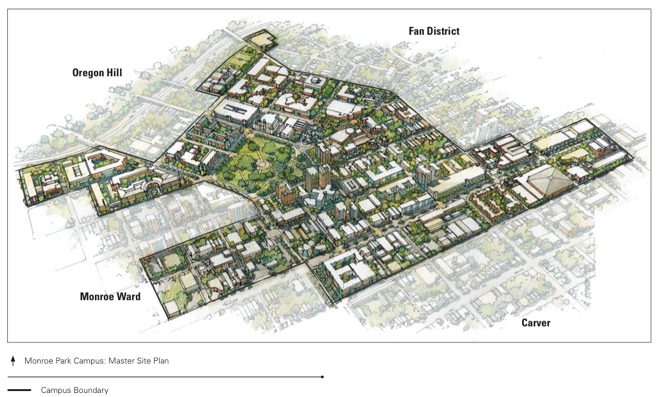 But basketball isn’t the only VCU addition on Broad since 1997. The School of Arts Building just down the street from the Siegel Center was another large and pivotal building to VCU’s overall development of the area. “We put in about $100 million over on Broad Street between all of our facilities”2

Ohlinger said private investment from the likes of Kroger and other businesses have added additional $150 million to that area. “It’s interesting to watch what’s going on there with new business and retail storefronts,”3 Ohlinger said.

But some think VCU’s expansion efforts hurt local businesses. Some even think VCUwants businesses to fail, so the university can acquire more buildings.

But Ohlinger said VCU is very pro-business because businesses are an integral part of the university and its allure. “Part of what’s always been unique about VCU are some of those…eclectic businesses” that stretch along the 800-900 blocks of Grace and Broad streets, he said. “We want them to succeed. That’s good for the university.” He added that the university is planning to improve the streetscapes in those areas to benefit local businesses.

In 2008, VCU began renovation of the former City Auditorium at 101 S. Linden Street, adjacent to Oregon Hill. In 2010, the 18,000 square-foot Cary Street Gym opened with a rock-climbing wall, heated indoor pools, four basketball courts, indoor running track, among other amenities. The project cost $47 million, in part because it achieved the LEED Gold designation for its environmental considerations, like water-efficient plumbing and low-emission products in its paints, coatings, carpet, and composite wood materials.

In 2011, the Virginia Sustainable Building Network awarded the gym its Virginia Green Innovation Award. In 2012, the National Intramural-Recreational Sports Association named it one of that year’s Outstanding Sports Facilities.

As VCU’s student enrollment grows, so do the stress levels of car owners looking for a nearby parking spot. Ohlinger said that VCU’s expansion has deliberately accounted for the limited on-street parking.

Surprisingly, VCU has unused spaces each year. “On an annual basis…we don’t sell out our parking.” Ohlinger said the university has about 500 available spaces on the Monroe Park campus alone. “There are just some students, faculty, and staff that don’t want to pay for parking, and so they will look for areas where they can park where there’s not a cost.” 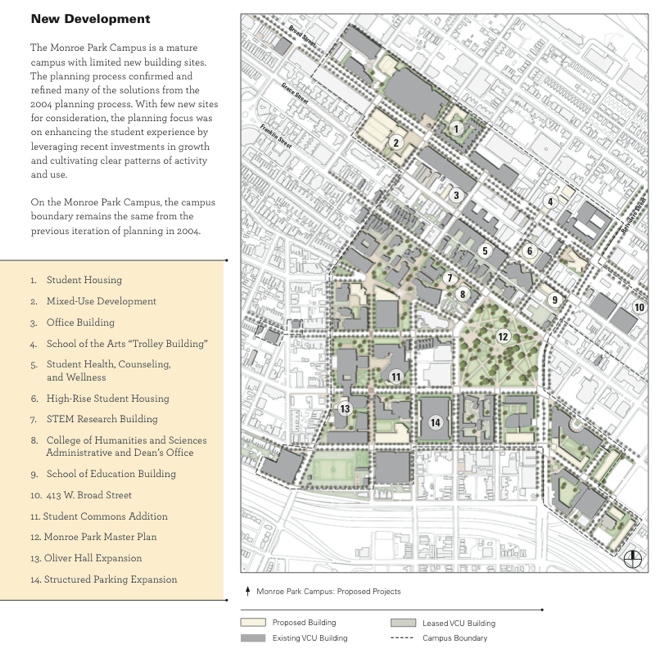 New development on the Monroe Park campus (click to enlarge)

Ohlinger said VCU has worked with residents and neighborhood organizations to diminish parking inconvenience for residents near the Monroe Park campus. He said that VCU supported the 1-hour parking limits put in place in the Lower Fan, as well as fronted some of the start up capital for similar limits in Carver.

Ohlinger said there’s “no excuse” if a student gets a ticket because “we can accommodate them in our parking facility.” For evening students, the university offers a $38-per-semester parking deck permit to encourage them to use the decks instead of on-street parking. 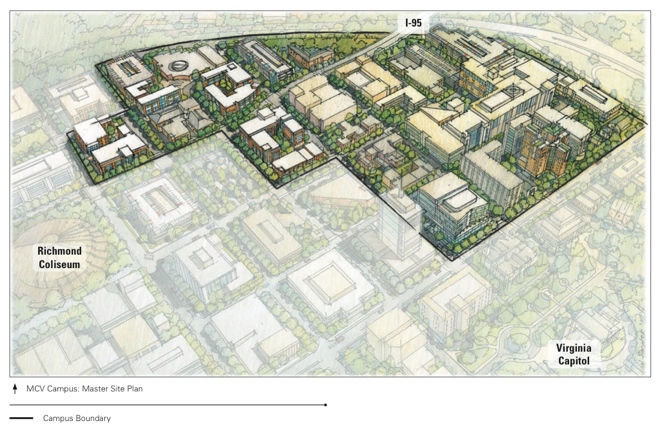 Master site plan for the MCV campus (click to enlarge)

In 2002, the nine-level, $59 million Gateway Building opened on the MCV campus, linking the hospital with its outpatient clinics. Inside, the building has an imaging center with a PET scanner and a high resolution MRI scanner, among others.

In 2008, VCU Health Systems opened its Critical Care Hospital, a 367,000 square-foot facility that added space for the system’s intensive care, surgical trauma, neonatal, burn center, cardiac, neuroscience, oncology, and other units. “That was a significant game changer for the entire health system when the wing opened,” Ohlinger said.

VCU’s has plenty more buildings in its pipeline. Last September, the university announced its $50 million plans to renovate and add onto the Cabell Library on the Monroe Park campus. The building will be roughly 156,000 square feet and is slated to open sometime in 2015. Shortly thereafter, VCU will likely turn a portion of Park Avenue–outside the Singleton Center for the Performing Arts–into a pedestrian walkway closed off to automobiles.

The Institute for Contemporary Art is also scheduled to open in 2015. Designed by architect Steven Holl, and led by director Lisa Freiman, Ohlinger said the 40,000 square-foot, state-of-the-art building on the corner of Belvidere and W. Broad will likely garner the most attention of any upcoming building because of its modern design. “[It’s] going to be extraordinary,” he said. 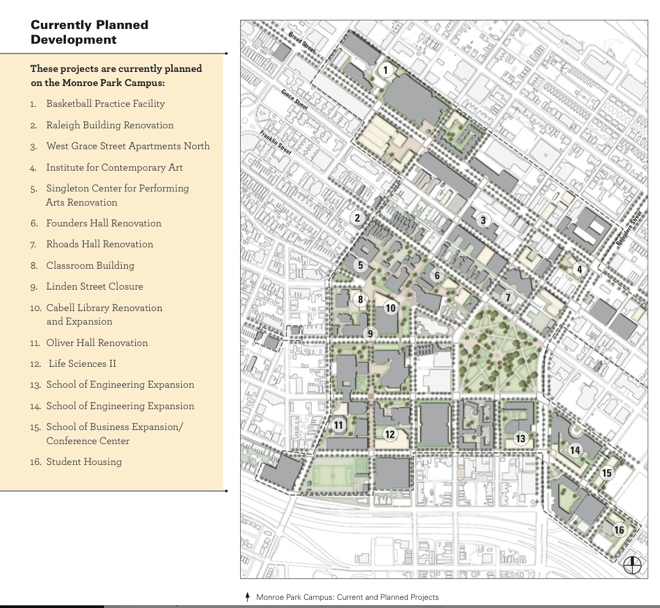 Currently, VCU is renovating the old Richmond Glass Company building at 814 W. Broad Street. “We’re really restoring that building back, from a facade perspective, to what it was when it was built in 1908 or so,” Ohlinger said. When completed, the 30,000 square-foot building will house the VCU Arts Kinetic Imaging department, along with two dance studios. “Our hope is that it will be a catalyst for buildings adjacent to it.”

VCU is also interested adding to its engineering and business buildings over on Belvidere. Ohlinger said it’s likely more buildings would come online between 2020-2025.

VCU is also planning two additional student housing buildings on the site of two existing surface parking lots: the first in the old Ukrop’s parking lot near The Village Cafe, and the second at the corner of Harrison and Broad streets. Those projects are expected to begin in March, and will be close to VCU’s existing construction and recently opened dorms and parking deck along Grace Street. “Grace Street is really becoming a campus village, if you will, with housing that’s distributed along the street and its impact on the university,” Ohlinger said.

In the near future, VCU will add a basketball practice facility adjacent to the Siegel Center. Because it’s a fundraising-dependent building, Ohlinger wouldn’t estimate its opening, but said the university is in the process of selecting a design team for it.

VCU also has plans for other athletic programs. “We have been looking at the potential for some possible land acquisition which would allow us to consolidate practice fields and build an indoor practice facility,” Ohlinger said. “We are probably the only Division 1 athletic program that doesn’t own a single practice field.” He said VCU soccer and tennis teams rely on city parks for practice as a result. Ohlinger didn’t mention what sites VCU has scouted.

The VCU Men’s Baseball team partners with the Flying Squirrels to use The Diamond for its games. Ohlinger said that no matter where the replacement for The Diamond may go (i.e. Mayor Jones’s Shockoe Development Plan), VCU would like to continue partnering with the Squirrels.

CITY WITHIN A CITY?

Some worry that the previous, current, and future expansion of VCU is only creating a virtual city within Richmond. Ohlinger said that VCU officials actively work to avoid that.

“Philosophically, our presidents [Eugene Trani and Michael Rao] and our board have always been of the notion that we are a part of the city,” Ohlinger said. “We’re not an island within the city.” 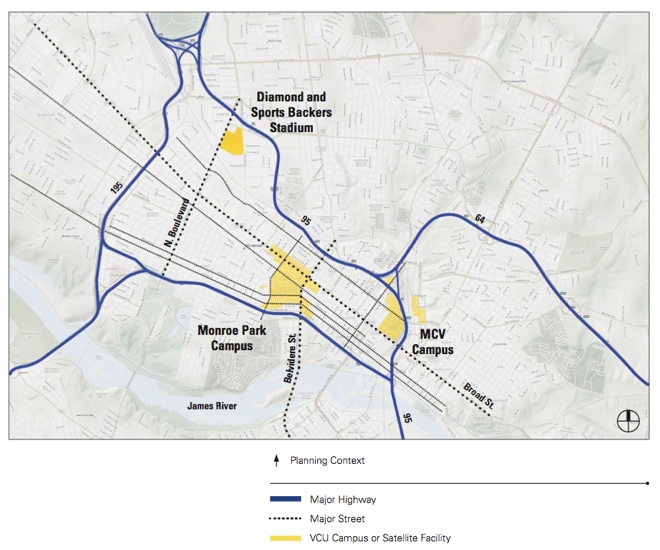 Map of VCU/MCV property in Richmond (click to enlarge)

He said some universities–like Emory in Atlanta (with fences around it) and Columbia in New York City (which use its buildings as outer boundaries of the school)–are deliberately insulated from their respective city, and that VCU won’t follow their lead.

“As we’ve built our buildings…we’re not showing the backs of our buildings to the neighborhoods,” he said. “That’s been very important to stay part of the vibrancy of the city without being separate from the city.”

photo and images courtesy of VCU