The Complexity of Richmond’s Sausage King 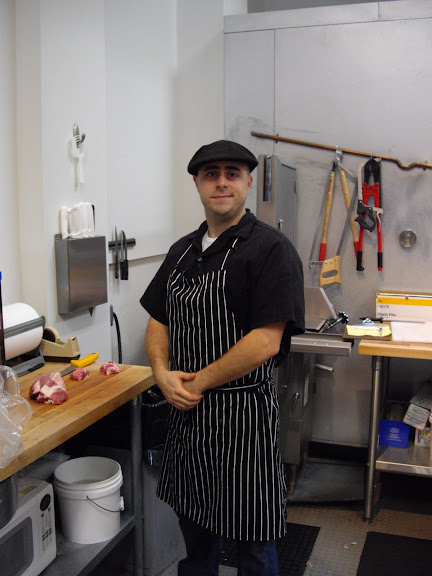 I was a vegetarian for 2 years, then I said “life is too short”. I realized I didn’t have a problem with meat, just the the way it was produced.

Those words were uttered from the person I commonly refer to as the “Sausage King of Richmond”. His name is Chris Mattera, and you can find him slinging a knife at Richmond’s own Belmont Butchery.

Artisanal gastronomy is something you think you might find in San Fransico, Seattle, or Brooklyn. We are extremely fortunate to have it here in Richmond with Chris. Chris was trained at Le Courdon Blue in Paris. He started to perfect his gastronomy training at an early age and honed his skills by working in a butcher shop, studying in Iowa and apprenticing in San Miniato, Italy. Whether it is curing salami, smoking bacon, forming rabbit terrine, grinding sausage, or breaking-down a side of beef, he can do it all and do it well.

Based on his unofficial title, it is safe to imagine that he makes some amazing sausages, whether they be fresh or dry cured. I remember first trying his Della Nonna (named for his grandmother) about 3 years ago and it changed my view of sausage. I also have a special place for the San Miniato (recipe from Italy), Brats (with their addictive seasoning), and the smoked beef hot dogs. What is fun about Chris, is that he will engage you about the sausages. He did a test batch of a buffalo chicken sausage, and we spent a good 45 minutes going back and forth about what would make it better. He is also willing to try new stuff. My current project is convincing him to try a Texas Rope Sausage.

What I think makes Chris unique is that he is on a mission.

I am personally invested into the whole local foods movement. [Food] is not just any commodity. its the only product that the consumer literally consumes into part of their bodies.

Chris spent some significant time this year helping a small eatery get off the ground in the East End of Richmond. He wants to see local, fresh, healthy food get into the hands of not only the wealthy but also the poor. In his mind, until the less fortunate are able to get better access to ethically raised food, factory farming will continue to flourish.

Chris is also letting his voice be heard. You can read his stuff on RVA News, the Edible Chesapeake, Richmond Magazine, and several newspapers.

In the end, Chris is just trying to make a difference whether its helping me enjoy the delights of cured meats or with the larger community and helping them understand the importance of responsible eating.