VCU Athletics announced that Virginia native Lindsey Vanderspiegel will take over head coaching duties for its women’s soccer team after the departure of the previous coaches, Tiffany and Tim Sahaydak (see below). For the past two years, Vanderspiegel was the head coach at Georgia Southern University. She becomes the sixth coach in the VCU program’s 19-year history.

“After a brief but exhaustive national search, Lindsey was the clear choice as the best fit here at VCU,” said VCU Athletics Director Ed McLaughlin. “She is a proven winner, both as a player and a coach. We are extremely excited about the future of our women’s soccer program with Lindsey leading us to our goal of winning championships.”

Vanderspiegel accumulated a 17-19-7 record coaching the Eagles, including a 10-8-5 mark last fall. As a player at William & Mary, she earned All-CAA First Team honors four times. She was CAA Player of the Year in 2002, and the CAA Rookie of the Year in 2000. She was also named to the CAA’s 25th Anniversary Women’s Soccer team.

“This is a tremendous opportunity to lead the VCU women’s soccer program and to build upon the success of an outstanding tradition,” Vanderspiegel said. “I could not be happier to embark on this new role, in my home state, to contribute to this truly remarkable university and athletics department.”

The University of Central Florida has hired VCU co-head coaches Tiffany and Tim Sahaydak to take over UCF’s women’s soccer program. Tiffany Roberts Sahaydak, who played on Team USA when they won the 1999 World Cup (see below), has coached with her husband, Tim, at VCU since 2007.

“It is difficult to move on from a VCU program that Tim and I have built over the past six years,” Tiffany Roberts Sahaydak said. “I want the present and former players to know that they have made our experience in Richmond truly special. It is because of the players’ trust and hard work that Tim and I now have this new opportunity in our coaching career.”

VCU Athletics Director Ed McLaughlin thanked the couple for their last influence on the team.

“VCU Athletics wishes Tiff and Tim Sahaydak the best of luck in their new endeavors at UCF,” McLaughlin said. “Their hard work has positioned us to achieve our goals of winning championships and providing an excellent student-athlete experience. We can’t thank them enough for what they have done over the last six years.”

VCU is now conducting a search for a new head coach.

Tiffany Roberts Sahaydak remembers being seven years old and watching the 1984 Summer Olympics. “That was the first time I saw female athletes on television being recognized for being the best.” Those athletes left a lasting impression. “It really sparked my dream to become an Olympian one day.”

Sahaydak is currently co-head coach of the VCU women’s soccer program, but during the 1996 Olympic Games in Atlanta she played to more than 75,000 people who watched her and the USA women’s soccer team defeat China. It was the USA’s first ever gold medal in the sport. Sahaydak, who was 19 years old at the time, said competing in the Olympics was “an unbelievable experience,” much different from her experience just the previous year.

In 1995, the midfielder was on Team USA when they competed in the World Cup held in Sweden. She recalled those games having just “a couple hundred people in the stands.” A year later, Sahaydak and her teammates had police and security escorts. 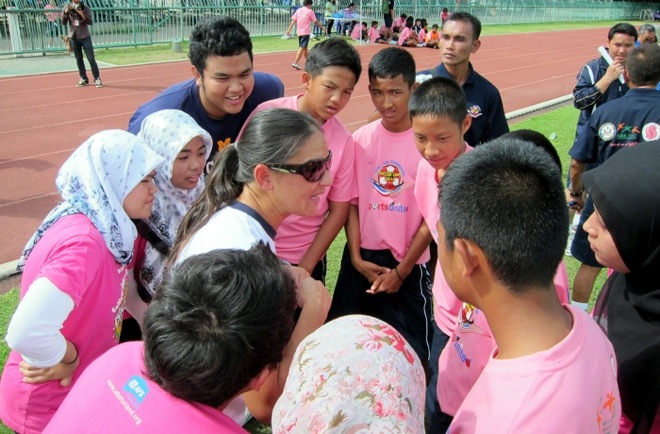 Roberts Sahaydak in Bangok Thailand, 2010, when she served as a soccer envoy

“The attention we received, all the gear from all the sponsors…there’s a lot going on around you…everyone will want your attention.” Much of that attention comes from supportive and excited family members who do not hesitate in asking for tickets, mementos, and even scarce time from their favorite athlete. Sahaydak and her teammates learned an important lesson: “It’s OK to say ‘no’ to families.”

Sahaydak said that one of the reasons Olympic athletes make it to the games is that they are determined to succeed. “There are a lot of distractions,” she said, but “being able to stay focused” will lead to success. Having supportive teammates also helps. “I had really good role models…I think we played it right.” As memorable as winning gold is, a couple years later she would be a part of an even bigger game.

On July 10th, 1999, Sahaydak was on the field at the Rose Bowl in Pasadena, CA when Brandi Chastain’s shootout kick won Team USA the World Cup title. Most of the 90,000 spectators erupted as Chastain famously tore away her jersey in excitement as her teammates, one of which was Sahaydak, swarmed the field.

In 2007, Sahaydak and her husband Tim took a job co-coaching the VCU women’s soccer team. She was living in California when VCU reached out to her, “I really didn’t know much about Richmond.” After visiting, she said that she and her husband were “blown away by the VCU athletic department…they really won us over with their excitement.” The couple also became fond of the city, calling it “innovative, diverse, just beautiful.”

When asked if some of VCU’s athletic programs were envious of Shaka Smart and the men’s basketball team, Sahaydak said their success “has been a dream” for the school. “We’re a very close-knit family,” success for one team benefits the others. About the recent hire of Ed McLaughlin as the new Director of Athletics, Sahaydak said that his energy and excitement will fit VCU very well. “I think he’s the perfect guy.”

As to the chances of Team USA in this year’s Olympic games, she said: “I think they have the team to win the gold again.”