Bobby Ukrop resigns from UR board

A member of one of RVA’s most famous families has resigned from the University of Richmond’s Board of Trustee over apparent frustration with the University cutting men’s soccer and track and field.

Bobby Ukrop has resigned from the University of Richmond Board of Trustees. He announced his resignation to the Board on December 7th.

Ukrop’s self-removal appears related to the University’s decision to remove men’s soccer and track and field from its athletics program, while also adding men’s lacrosse (see first post below). That decision, made by the Board of Trustees without any student knowledge or input, proved controversial among current students and alumni alike. It appears Ukrop’s resignation came on the heels of the Board recent decision to not reconsider its decision.

Ukrop, the former CEO of the eponymous local supermarket chain, graduated from the University of Richmond in 1969, and has thrice served on the Board for a total of 13 years.

An auditorium inside the University’s business school bears the name of the Ukrop family. That auditorium is where a public forum was held in October that featured UR President Edward Ayers explaining the University’s decision to cut the two popular athletic programs to an often bitter crowd (see previous update).

Members of the UR community packed into the Ukrop Auditorium Sunday afternoon to attend a public forum on the University’s decision to cancel both men’s track and field and men’s soccer, while starting men’s lacrosse. Select players of both discontinued teams gave formal remarks against the moves during the 75-minute event. UR President Edward Ayers also spoke to defend the changes to the athletics program. However, many in the audience remained dissatisfied with his explanations.

“He looked unprepared,” said David Blanchard, a member of the University’s track and field squad between 1998-2002. Blanchard and others also thought Ayers’ speech did not adequately explain the decision or its motivations. However, “the student speakers did a good job of being articulate and well thought-out,” said Blanchard.

Several of the questions to Ayers, tinged with opposition to the decision, received applause. Similarly, several of Ayers’ responses received boos.

“This was not a pleasant experience for him,” said Black. “He was very passionate about making his case to a non-friendly audience.”

During his talk, Ayers affirmed that the decision to cut the two programs and add lacrosse was final, adding that no further public discussion would take place. The abrupt end to debates surprised many, which view it as anathema to the University’s policy to “create and sustain a culture of intellectual inquiry.”

Despite the end of discussions, audience members were allowed to submit written questions to Ayers, to which the president pledged email responses. Many remain unsatisfied.

Select students and alumni have formed a steering committee to probe for further explanations as to why the decision was made. Some on the ad hoc committee hope to use national media connections to learn more (Blanchard said he’s heard a reporter from The Washington Post has made inquiries). Some students think that the only way the decision will be overturned is if bad governance or improper dealings are uncovered.

Many UR students and alumni have several inquiries, they argue, yet to be given reasonable answers. For instance, portions of the study that examined the mix of sports UR offered and ultimately led to the Board of Trustees’ decision (see updates below) will remain private. Lori Schuyler, Ayers’ Chief of Staff, said at the meeting that those portions contain student records and need to remain confidential.

While Ayers has decreed no further discussions on the matter will take place, many students and alumni hope that yet-to-be released information will turn the tide of opinion and lead to the reinstating of the two sports slated to end after this season.

“The reaction has been what we expected,” said University of Richmond’s athletic director, Jim Miller. “Mixed.”

Speaking on the phone yesterday afternoon, Miller sympathized with the frustrations of those upset over the University discontinuing men’s soccer and men’s track and field, yet adding men’s lacrosse. He also expressed concerns over what he called misconceptions about the deal, one that included a $3 million endowment to assist funding the new lacrosse team. Some have taken last week’s announcement and inferred that a lone individual conditioned the generous endowment with this: start a lacrosse team, regardless of what sports might be cut as a result. Not so, he said.

“This is not a situation: here is the money, start the team,” said Miller. He said last week’s announcement was a culmination of events that began in April 2011.

Miller said that a committee looked at over 60 unique configurations of both men and women’s sports teams. Some models included new sports. Some included discontinuing existing ones.

“Slowly, by narrowing it down,” said Miller, the committee eventually presented its recommendations to the Board of Trustees, the entity that would be in charge of implementing any changes to the athletic program. After considerations, they made a decision: “We wanted to start men’s lacrosse as a sport,” said Miller.

There were many reasons to add lacrosse. One was that UR had existing infrastructure that could provide facilities for a lacrosse team. Another was geography. Miller said that the committee discovered lacrosse was a popular sport in many of the areas of the country “that attract a lot of our students.” But there were also constraints, legal and financial, that complicated the decision. The first was Title IX.

Enacted in 1972, the provision requires that all universities who receive any federal funds must, among other things, ensure that both male and female athletes receive equal treatment, benefits, and opportunities. What it essentially means for most schools is this: for every male athlete there must one female athlete–no school can favor male athletes over females, or vice versa. Some wonder why UR cancelled two men’s programs while only adding one. The reason, said Miller, is not to equalize the number of sports, but the number of individual athletes.

A lacrosse team typically fields approximately 40 players. The men’s soccer team has 26 students listed on the roster, not enough to make up the difference. The men’s track and field roster consists of 23. Discontinuing the two sports, said Miller, would free up the slots needed for the University to maintain Title IX compliance (Miller said the net gain in slots would also provide roster assistance for female teams to add more players).1 But there was still the matter of money.

Obviously, cutting the two programs would save the University money, but Miller said they were still roughly $150,000 short to fund lacrosse, which Miller called a “more expensive sport.”

The difference could be made up with a reallocation of University funds, tuition increase, or several other methods to increase revenue. But that wasn’t what the University wanted. “We’re not going to start a sport that takes more money away,” he said. The University began to seek out donations from outside sources to cover the remaining costs. They ultimately found $3 million.

No one knows where the $3 million donation towards new endowment to fund lacrosse for multiple years came from (the donation remains anonymous). The Collegian, UR’s independent student paper, has reported that Board of Trustees member Paul Queally has been linked to the sport. He has declined to comment on whether he’s involved with sizeable sum.

With many upset over the University’s decision to discontinue two sports (see update below), Miller said that he’s not aware of any internal conversations about whether the University should reverse its decision. He said that would be a matter for the Board of Trustees.

Miller said that he has heard of a meeting scheduled for Sunday, September 30th at 5:00 PM inside the school’s business building to discuss the matter, but was not aware of the details. He said he would attend if he was invited.

Many in the UR community are upset over the cancellation of men’s track and field and men’s soccer. A Facebook page titled We are Richmond Track and Field claims to have received at least 9,000 signatures protesting the cuts, and another, Save Richmond Men’s Soccer, has amassed over 2,000 members.

We are Richmond Track and Field also took out an ad on the back page of today’s Collegian: 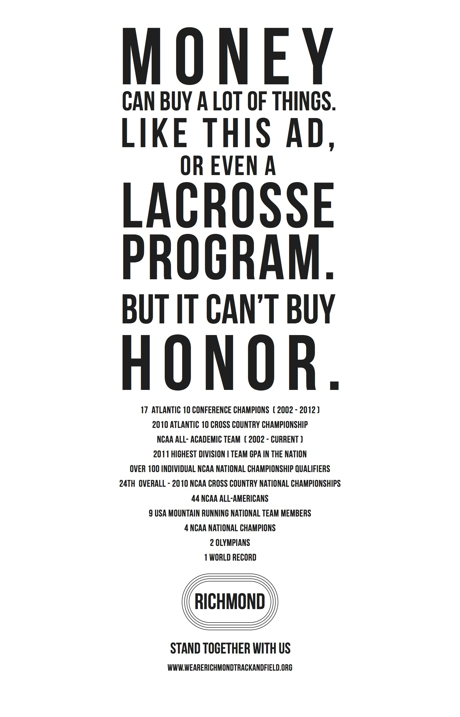 A public meeting with UR officials is scheduled for Sunday, September 30th at 5pm inside the Robins School of Business Building.

The University of Richmond announced it will discontinue its men’s soccer and men’s indoor and outdoor track and field sports. However, the University will add men’s lacrosse as a NCAA Division 1 sport. The changes will occur after the 2012-13 season.

“That assessment involved more than a year of extensive study and strategic analysis that considered many factors, including competitive success, high school and college sports participation rates, and resource requirements,” said Jim Miller, Director of Athletics at the University.

Miller added that, as a result of the changes to the athletic department, the University will receive a new $3 million athletic endowment fund. That revenue will be a gross financial gain for the sports program, in conjunction with the costs saved from discontinuing two sports.

“While this reconfiguration serves the best interests of the majority of our current and future student-athletes, we recognize how disappointing this decision is for our men’s soccer and men’s track and field student-athletes, their families, coaches, and our track and soccer alumni,” said Miller. “We are proud of the men who have competed as Spiders in soccer and track and field, and grateful for their many contributions to the University of Richmond.”

Current students playing in either cancelled sport will be permitted to continue attending UR under their existing scholarships. The University will also grant immediate release to student-athletes who choose a school transfer.

There are 30 reader comments. Read them.