OK, so the TL;DR of this game is: in their first night game at Robins Stadium, the Spiders win despite sloppy, turnover-prone play. Oh, hey, all that info was in the title.

OK, so the TL;DR of this game is: in their first night game at Robins Stadium, the Spiders win despite sloppy, turnover-prone play.

If you want to get into, let’s start with the drive summary table. I’m not sure I’ve ever seen one quite like this before: 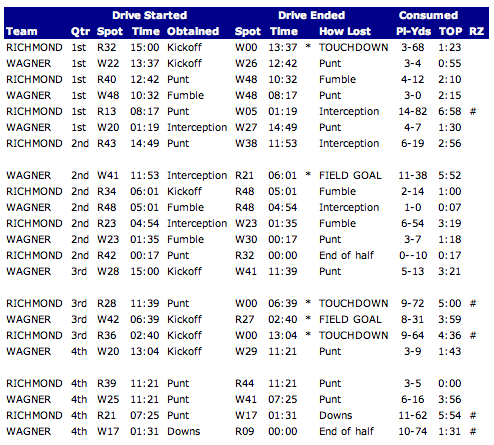 Richmond had three fumbles–and lost all three–while Wagner had two. Not to be out done, however, Wagner tossed up two interceptions to Richmond’s one. That’s eight turnovers. EIGHT. Not only that, my people, but check out the string of drives starting in the second quarter: fumble, interception, fumble, fumble, punt. Did either of these teams actually want the ball? It’s hard to tell. Coach Lineburg has got to clear up this case of the fumblerooskies (and interceptionitis?) before the CAA schedule starts. It’s fine to turn the ball over five times to Wagner, but any of the ranked teams in the CAA (which is, like, all of them) are going to destroy you for that. Coach Lineburg had this to say:

We’re never going to apologize for getting a win. We played hard. Obviously there are some things in the game we need to do better. Protect the ball, first and foremost. In the end, the kids hung in there. In the first half, we struggled. In the second half, we bounced back and got the run game going which really helped us. We had to give our hats off to the defense. They held us in the game.

Other than freely giving the ball away every chance he got, the Spiders got some good yards out of Aaron Corp: 16-25, 236 yards, and two touch downs. If he can stay healthy, I think he’ll only get better as the season continues.

Next up for the Spiders is VMI at home under the lights. The Keydets kept it a lot closer against William & Mary than I thought they would (24-7) but, this is a game the Spiders should win. If they don’t turn the ball over a trillion times.

You can look at the full box score over on the Richmond Spider website.