Raising Richmond: Running for us

Less than a year ago, I couldn’t fathom why anyone would run unless he or she was being chased. On Saturday I ran 6.2 miles on purpose. Find out how I got to that point and why I wanted my son there to see it. First, a note: I wrote this column before the horrible events that took place yesterday during the Boston Marathon. We thought about tabling this column until another time, but I think it makes sense to post it now. As last weekend’s 10k showed us, Richmond is a city that loves runners–those who live, train, and race here, and those who pound the pavement elsewhere. Boston, you are in our prayers and in our hearts. RVA loves you.

For information on how you can offer your support to those affected by this tragedy, visit redcross.org.

For whatever reason, my high school required the 10th grade physical education curriculum to include an entire unit on pickleball. If you’re not familiar with pickleball, it’s basically tennis, badminton, and ping-pong all wrapped in a terrible, stupid package.

You might be able to tell that I hated (and still hate…HATE) pickleball. It’s wasn’t because the game is stupid (although it was), and it wasn’t because I had to play it while wearing a kelly green gym uniform (although that didn’t help matters). I hated/hate it because never has a sport existed that better highlighted my supreme lack of physical coordination and athletic ability.

Case in point: one of my classmates showed up for gym totally high out of his mind and still managed to kick my ass with little-to-no effort. I can still picture him wiping tears of laughter from his bloodshot eyes as he watched me flail about the court.

But time passed, and I eventually graduated from high school and never had to play dumb pickleball–or participate in any sport at all–ever again.

So I didn’t. It wasn’t like I was sedentary or anything, but the anxiety coursing through my veins during my late teens and early 20s apparently was enough to defy the logic of that whole “calories in vs. calories out” rule. And when the time came to shed the 30+ pounds bestowed upon me after two years on anti-depressants (in an effort to calm the aforementioned anxiety), I managed to do so with the help of lots and lots of time on the elliptical–a machine that’s fairly effective and requires minimal skill.

Then I went and got knocked up and ceased pretty much all physical activity as soon as that second pink line showed up on the pregnancy test.1 And while I was lucky to be able to essentially nurse off the 40 pounds2 I gained while pregnant with our son JR, I knew I needed to get back into some sort of routine.

But I just…didn’t. I tried, experiencing occasional bursts of motivation that would steer me towards the gym a couple times a week for a month or so. Then I’d go off the rails for whatever reason and weeks would pass before it would even occur to me to do anything beyond a walk around the neighborhood with my kid in tow.

And it went on like that for almost four years. Because life just happens, and time seems to move at a sickeningly quick rate the older you get.

Cut to last May and I found myself sitting in my doctor’s office going over the results of my annual (…annualish) physical. By some miracle (and probably thanks to my husband’s penchant for cooking meals that include things other than peanut butter and jelly3), all of my numbers looked good. Weight? Right on target. Blood pressure? Wonderfully low. Cholesterol? Totally fine.

By that point I was ready to hop down off the table and call it a day. But my doctor wasn’t finished.

“Ok, let’s talk about lifestyle stuff,” he said. “How much physical activity are you getting each day?” he asked, raising his eyebrows at me.

I looked at the floor a little, hemmed and hawed for a good long while.

“Not a lot…usually none. I mean, besides chasing my kid around.”

“That’s not good enough,” he responded bluntly, rattling off the specific points in my family’s medical history that could come into play for me down the road: high blood pressure, heart disease, osteoporosis, etc.

“You have the luxury of knowing a lot of things your grandparents and parents didn’t. If you adjust your behavior now, hopefully you won’t have to deal with those same issues.”

“But it’s so hard!” I sighed, exasperated almost to tears. “I work a lot; my husband works a lot. Time at the gym just isn’t an option right now.”

“Well, that’s easy,” he smiled. “You should start running.”

I scoffed at him. Me? Running? On purpose? I mean, for a reason other than being chased?

“I don’t do that,” I answered. “I’m not a runner. I hate running. I’m not athletic or coordinated or at all motivated to do anything like that ever.”

“But here’s something you need to remember: a 30-minute run takes 30 minutes; you don’t have to factor in travel time going to and from the gym,” he explained. “It’s going to be the most efficient use of your time.”

I pulled a face.

“Do this for me: give it two weeks. Then see how you feel.”

He held out his hand, ready to shake on it.

I paused, giving him the once over. I figured if my doctor–someone I like very much but who only sees me a couple times a year–was so adamant about this, I might as well give it a try.

Reluctantly, I offered my hand in return.

The first run was horrible. I could hardly jog for two minutes without getting winded.

Towards the middle of my second week at it, I began to notice a change. I didn’t enjoy the act of running very much, but I couldn’t deny how good I felt after logging a mile or two. So I kept at it, even after the promised two-week marked passed.

Gradually two miles became three, three became four, and so on. I found my groove, discovered running routes, routines, and rituals that worked for me. I’d fit in three or four runs a week–sometimes after work, maybe before dinner, even in the morning if I could get my act together. Before I knew it, running became something that I just did…and even liked. A lot.

And my son started to notice.

When I’d pick him up from school, my shirt and shorts still damp with sweat, he’d announce to his friends, “My mama went running today!” He’d look out the car window as we drove around town and ask, “Is this where you run, Mama?” or point out other runners and say, “Look! She’s running like you do!” Sometimes he’d even join me for a post-run stretch and a quick round of sit-ups and push-ups.4

For him, it wasn’t this strange, out-of-the-box thing for me to strap on my shoes and go for a run, even though it still felt very awkward for me at times. Eventually it hit me: “If my son thinks of me as athletic, why can’t I? What’s my problem?” I’d dug in, and I’d worked hard; I was allowed to change how I thought about myself.

So even though I kind of wanted to throw up when I clicked “Submit” on the registration form for the 2013 Ukrop’s Monument Avenue 10k last December (the day after Christmas, actually), I was stoked–terrified but stoked. I knew I could do it, and I wanted my son to be there when I did.

In the four months between registration and the race last Saturday, I completed about 30 runs. Not a ton–and probably not anywhere close to the amount recommended for official training–but still way more than I’d ever done in my life. I got sidelined a couple times by tweaked knees, a jacked up foot, a couple nasty chest colds, and sore hamstrings, but I pressed on.

When I stood in the corral with my wave5 on Saturday morning, I couldn’t think of anything but my little boy. Yes, I’d gotten into running because of my need for self-care (and that really is what it’s about), but I decided to make that morning’s race about him. As I inched closer to the starting line, I listened to our song6 over and over, just smiling. I was probably on my fifth listen by the time my wave took off.

My husband set up camp at the Robert E. Lee monument with JR and my-inlaws for the duration of the race. For those of you not familiar with the course, that’s really the perfect spot to see the ones you love: you pass it just as you really start to get going and again right before you cross the finish line. During my first pass, JR looked panicked, like he was trying to find me but couldn’t–there were 40,000 other people running that day, after all. But eventually we locked eyes, and he gave me a sweet smile. By the time I looped by again, he was waiting for me, standing right on the curb, cheering, “Go, Mama!” I reached out to give him a high-five, and when his little fingers touched mine, a solid lump took shape in my throat.

Crossing the finish line felt fantastic, but it was nothing compared to clapping eyes on my family afterwards as I milled around the post-race meeting area. I heard my mother-in-law call my name and looked over to see JR perched on my husband’s shoulders, everyone all smiles.

(Excuse me a moment. I have something in my eye.)

I don’t know what JR got out of the day (other than a free banana and a bottle of water, the latter stolen from me post-race), so after I shared my sweat with everyone during congratulatory hugs, I asked that JR and I get our picture taken together. Here I am in all my post-race, hot-mess glory: 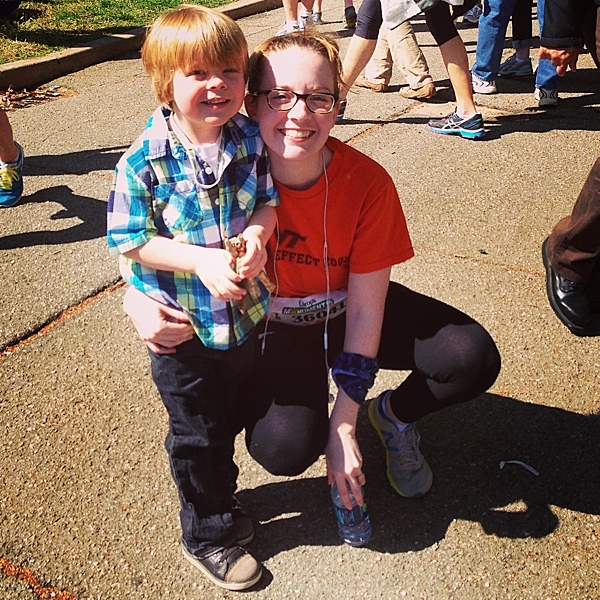 When I look at that photo, all I can think is, “I’m so glad he saw me do it.” Thanks to that day (and that picture because who knows what determines which memories stick in that mind of his) we both have a moment to look back on and talk about what it’s like to get out of your comfort zone, to work for something that feels hard and strange but finish it anyway–and maybe even love it.

And as an added bonus, I now have photographic evidence that even though that guy from gym class probably could still beat me at pickleball, there’s a decent chance I can chase down his sorry ass.