Quidditch! The VCU Wizengamot walked away with the big win over the JMU TBA’s (seriously they haven’t decided on a name yet).

It’s a warm February Sunday in Richmond at Petronius Park with two teams of cheerful purple and yellow-clad Quidditch teams assembling on the field. Onlookers line the field, mostly cheering for our home team, the VCU Wizengamot. The Wizengamot team is about to face, for the very first time, the JMU Quidditch team which is new enough to have not quiiiiiite decided on an official team name yet. But team name or no, they are ready to fight for victory. The question is, will VCU rule the day or will the newcomers steal the glory? After all, JMU has what one might consider a “secret weapon” — they have acquired an old VCU team member for their own…

To back up a second, if you’re curious about how this whole Quidditch thing started, check out the video of team captain Britni Puccio explaining to RVANews Intern Doug how the game works, how the Wizengamot came to be, and how the positions are played! As Puccio sums up “It’s a lot of fun. We hate saying it, but it’s like a mix between soccer, rugby and lacrosse. If you put all those three sports together and you added a broom to it, you’d probably have Quidditch.”

On the Quidditch pitch (that’s the playing field), teams have warmed up, and are lined up in front of their team hoops.

“Brooms down, eyes closed, the Snitch is released!” calls a referee. Emily Wells — clad in a bright gold shirt, shoes, and radiant tennis-ball-in-a-sock tail — leaps up and runs away from the center of the field dashing off across Petronius Park into the foliage beyond the tennis courts, away and out of sight. And yes, this is exactly what is expected. While the Golden Snitch may be played by a small flying shuttlecock sort of creature in the Harry Potter books here in Muggle Quidditch, the Golden Snitch is played by a person who acts out a private game of tag football (of sorts) with the two Seekers from the opposing teams.

With the Golden Snitch released, players are allowed to open their eyes, and the game begins with a shout for “Brooms up!” 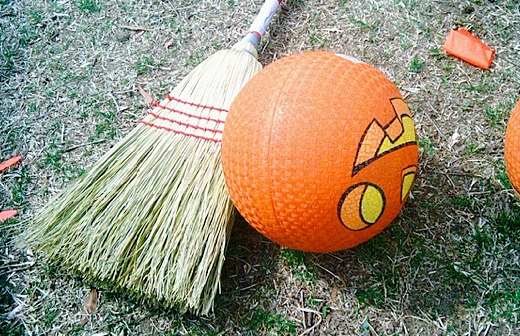 All seems to be immediate chaos as Beaters hurl their Bludgers at Chasers, and Keepers try to field off attempted goals shot through the three golden hoops set up at either end of the pitch. At one point, Beaters from JMU scramble on their brooms to attack VCU’s Chaser, toppling to the ground in the process. The Wizengamot’s Pierson Geyer makes a valiant goal against JMU, leaping into the air as he throws the Quaffle through the JMU goal-hoop. VCU is ahead 10-0, so ten minutes into the game, things are looking good. Minutes later, the Quaffle again shoots through a JMU hoop. VCU is ahead 20-0 now.

“IF YOU DON’T HAVE A BALL, PUT YOUR BODY IN THE WAY!” someone shrieks from the sidelines. Both teams are fighting hard, pummeling each other and scrambling for the Quaffle while avoiding Bludgers and still the two seekers are trying to watch for the Golden Snitch to reappear. Numerous tumbles occur, piles of players…pile up, there are kicks to the head. This is not a sport for those who don’t want to get hurt! JMU gets the Quaffle soon enough, but all too soon (for them) a VCU Beater knocks it away, and soon the score is 40-0. But where is the golden…

“LOOK! It’s the Snitch! SNITCH ON THE FIELD!”

The Wizengamot Seeker charges towards Wells, but can’t get her tail as she dances and evades all attempts at entrapment. It’s a personal battle between the Golden Snitch and the Seekers, and it’s over almost as quickly as it began, as her tail is grabbed, effectively ending the game in VCU’s favor with a final score of 70-0. This game didn’t last long, but it was well-fought. Another game takes place shortly thereafter (the final catching of the Golden Snitch this time involves a good dousing from a water bottle used as a surprise weapon!), and JMU makes a valiant attempt to reclaim the victory, but alas, it’s VCU who wins the day with two wins against their rival.

After the game, I catch up with Brooke Bernard. Bernard was one of the first members of the VCU team, but when she started grad school at JMU, defected to the enemy (er, JMU team — sorry, my own VCU team roots are showing).

“What is it like suddenly playing against your own team?” I ask.

“Well, I see people from a different perspective — now I have to compete against them. Not like in a friendly competition of a scrimmage, but in a real competition.”

“Would you say you have an advantage, or not really?”

Bernard laughs and replies, “I think I know how people play…so I can say so-and-so is really fast, watch out for them!”

When asked how she feels the game went, she replies, “I think it went really well. You’re gonna lose your first game, and part of it is just…realizing what comes with playing, and how you’re supposed to act on the field…being aware. We have a really big team for our first year, but it’s not large enough to actually scrimmage, so we haven’t had a lot of games against each other where we have a full set of people on teams.”

So while VCU won this time, the real question is…will JMU come back even stronger next time? You can catch games at noon at Petronius Park (1400 Idlewood Ave) on Sundays — why not fly by and watch to find out? It’s free, and while they don’t have a Nutsy of their own to entertain onlookers, the entertainment of such a unique sport is fun in and of itself.